What is in your water? Chances are you have no idea.

According to the Environmental Working Group (EWG), tap water contains several chemicals that can be harmful to human health. These include, but are not limited to, arsenic, chlorine by-products such as chloroform and trihalomethanes, lead, nitrates, and nitrites from fertilizers or septic systems, pesticides like DDT and dioxin. 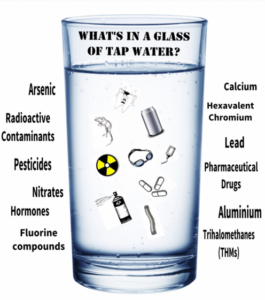 It is a terrifying fact that cancer-causing radioactive contaminants are also found in drinking water.

This raises a plethora of questions, like is it safe to drink this tap water with chlorine by-products, heavy metals such as lead and arsenic, or radioactive isotopes like radon gas (Rn)? What about pharmaceuticals that get flushed down toilets or disposed of through medication take-back programs?

There are over 80,000 chemicals on the market today without regulatory control over how much they can be legally released into our environment; we also know the ill effects of these elements on human health when ingested even at low doses, continuously and over time.

Researchers have linked contaminated drinking water to various illnesses, including cancer, obesity, asthma, and even autism spectrum disorder. This blog post will explore these issues further so you can make informed decisions.

The dangers found in drinking water are not always what you think they are. The most dangerous element is chlorine, which can cause allergic reactions and destroy healthy cells within your body’s surface.

Why is Potable Water Becoming Contaminated with Toxic Chemicals?

Potable water is becoming more and more filled with toxic chemicals due to the following:

Glyphosate is present in Round Up and other weed killers and covers our planet, it is particularly harmful to us and our future generations. In August of 2018 stock prices for Bayer, the company that now owns Monsanto, took a nosedive after a jury in San Francisco awarded $289 million in damages to Dewayne Lee Johnson, a former school grounds keeper, ruling that his terminal cancer was caused by Monsanto’s Roundup products. Mr Johnson’s attorneys say he was diagnosed with non-Hodgkins Lymphoma after spraying Roundup weed killer for two and a half years. The judge also stated that Monsanto had known about the cancerous effects of Round Up and so had behaved fraudulently and unethically.

Is the Government Transparent About Drinking Water Safety?

More often than not, the government will report that there are no known contaminants in drinking water. This is because most of these databases only contain data for a handful of chemicals and do not account for everything.

The EPA publishes an annual Drinking Water Contaminant Report with findings from its monitoring programs on chemical levels found in public water supplies. It monitors over 80 pollutants, but it has only tested for about 50 chemicals total since 2004.

How to Ensure Drinking Water Quality?

One way to ensure drinking water quality is by purchasing a whole-house filter. These filters are capable of removing up to 99% of contaminants found in tap water, including lead and mercury from the air conditioning system/refrigerator coils, chlorine taste/odor, metal particles (iron), pesticides (including DDT), nitrogen compounds, herbicides (e.g., atrazine), bacteria as well as many pharmaceuticals.

Also try to go with a whole-house filter that offers an ion exchange system.

A UV light purifier can also be added on top of these filters for an extra layer of safety against harmful microorganisms such as giardia or cryptosporidium, which may have survived the traditional filtration process.

If you live in rural areas with wells, you can even contact your local water supplier as this is often better water.

Safe drinking water is your right!