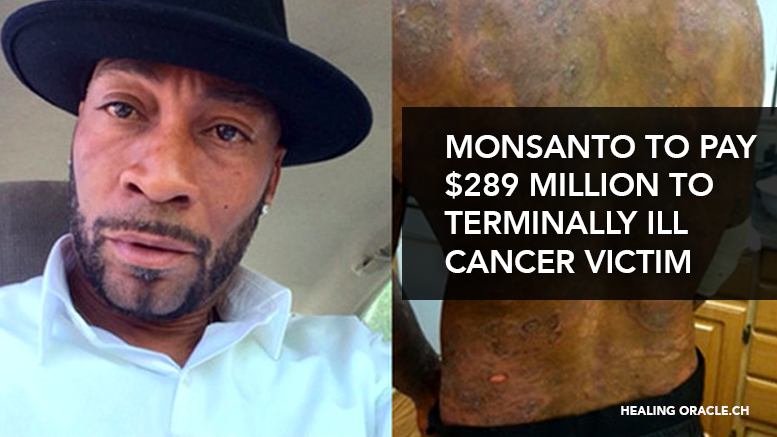 Monsanto the GMO and agricultural giant is facing much criticism tonight, as a jury has found in favour of Dewayne Lee Johnson a former school grounds keeper. Johnson’s attorneys say he was diagnosed with non-Hodgkins Lymphoma after spraying Roundup weed killer for two and a half years. Round Up is also used to spray much of our house hold crops that we now consume, so this is a story that effects all of us.

UPDATE: The court ruling had an immediate effect on Bayers share price, which plummeted within hours of trading…

Johnson was the first of hundreds of cancer patients to take the company to court over its popular weed killer, Roundup (CNN News).

According to ABC News Monsanto released a statement regarding Friday’s verdict:

“We are sympathetic to Mr. Johnson and his family. Today’s decision does not change the fact that more than 800 scientific studies and reviews – and conclusions by the U.S. Environmental Protection Agency, the U.S. National Institutes of Health and regulatory authorities around the world – support the fact that glyphosate does not cause cancer, and did not cause Mr. Johnson’s cancer. We will appeal this decision and continue to vigorously defend this product, which has a 40-year history of safe use and continues to be a vital, effective, and safe tool for farmers and others.”

CNN reported: Dewayne Johnson was seeking about $400 million in punitive damages and $39 million in compensatory damages from Monsanto, his attorney Timothy Litzenburg said.

Johnson’s victory Friday could set a massive precedent for thousands of other cases against Monsanto.

Johnson’s case was the first to go to trial because in court filings, doctors said he was near death. And in California, dying plaintiffs can be granted expedited trials.

Johnson, 46, applied Roundup weedkiller 20 to 30 times per year while working as a groundskeeper for a school district near San Francisco, his attorneys said.

He testified that during his work, he had two accidents in which he was doused with the product. The first accident happened in 2012. Two years later, in 2014, he was diagnosed with non-Hodgkin’s lymphoma.

On bad days, Johnson is too crippled to speak. Lesions have covered as much as 80% of his body.

Litzenburg said he and other attorneys have more than 2,000 similar cases awaiting trial in various state courts.

He estimates another 400 cases have been filed in federal multi-district litigation, or MDL. 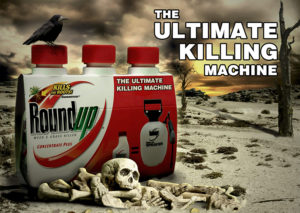 According to The Recorder the jury, in The San Francisco Superior Court, found that Monsanto had failed to warn about the dangers of Roundup and Ranger Pro, both herbicides, and awarded $39.2 million in compensatory damages and $250 million in punitive damages to Dewayne “Lee” Johnso

The trial, which began July 9, is the first to allege Monsanto’s Roundup caused cancer. A San Francisco Superior Court jury started deliberating on Wednesday. According to the plaintiffs lawyer, R. Brent Wisner: “We were finally able to show the jury the secret, internal Monsanto documents proving that Monsanto has known for decades that glyphosate and specifically Roundup could cause cancer… Despite the Environmental Protection Agency’s failure to require labelling, we are proud that an independent jury followed the evidence and used its voice to send a message to Monsanto that its years of deception regarding Roundup is over and that they should put consumer safety first over profits.”

YET Monsanto’s attorney, George Lombardi of Winston & Strawn, told jurors that reams of scientific studies and regulatory agencies, like the U.S. Environmental Protection Agency, showed no link between glyphosate, Roundup’s key ingredient, and Johnson’s cancer, a type of non-Hodgkin’s lymphoma called mycosis fungoides. So expect an appeal and we will await to see the outcome…