Sex is one of our biggest preoccupations — causing thrills, heartache and downright confusion. But until recently, exactly what happens in the brain during sex was something of a mystery to scientists.

Now, however, American researchers have uncovered what goes on in a woman’s head during an orgasm.

The scientists from Rutgers University, New Jersey, used scans to monitor women’s brains during orgasm and found that different brain parts are activated when various parts of her body are aroused. 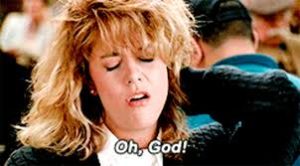 They found that up to 30 different parts of the brain are activated, including those responsible for emotion, touch, joy, satisfaction and memory.

The scientists found that two minutes before orgasm the brain’s reward centres become active. These are the areas usually activated when eating food and drink.

Immediately before they reached the peak, other areas of the brain became affected such as the sensory cortex, which receives ‘touch’ messages from parts of the body.

The final part of the brain to be activated is the hypothalamus, the ‘control’ part which regulates temperature, hunger, thirst and tiredness.

Meg Ryan showed how women fake orgasms in When Harry Met Sally, but when they’re not faking them, they are more likely to fall in love with a man after sex

The scientists also discovered that sexual arousal numbs the female nervous system to such an extent that a woman doesn’t feel as much pain — only pleasure. The team now hopes to map what happens in a man’s brain during orgasm. 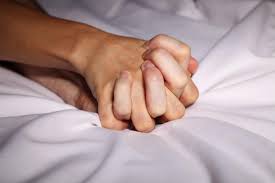 But what else is happening inside our heads when we slip between the sheets? Here we ask the experts to reveal how sex alters our brain.

A key hormone released during sex is oxytocin, also known as the ‘cuddle hormone’. This lowers our defenses and makes us trust people more, says Dr Arun Ghosh, a GP specializing in sexual health at the Spire Liverpool Hospital.

It’s also the key to bonding, as it increases levels of empathy. Women produce more of this hormone, although it’s not clear why, and this means they are more likely to let their guard down and fall in love with a man after sex.

However, the problem is that the body can’t distinguish whether the person we’re with is a casual fling or marriage material — oxytocin is released either way. So while it might help you bond with the love of your life, it’s also the reason you may feel so miserable when a short-term relationship ends.

Men, on the other hand, instead of getting a surge of bonding hormone receive a surge of simple pleasure.

‘The problem is that when a man has an orgasm, the main hormone released is dopamine — the pleasure hormone. And this surge can be addictive,’ says Dr Ghosh.

That’s why so many more men tend to suffer from sex addiction.

For women especially – the mind plays a key role in achieving orgasm. The key to female arousal seems to be deep relaxation and a lack of anxiety

Many of us are all too aware that our brain cells decline with age. In fact, it’s said we lose 7,000 brain cells a day by the time we’re 35, which makes rather depressing reading.

The good news, however, is that having regular sex may help us grow new brain cells, according to scientists from Princeton University in the United States.

And the more sex you have, the more cells you can grow, it seems. Animal studies, published in the journal PLoS ONE, suggest that sex stimulates the growth of brain cells in the hippocampus, the part of the brain responsible for memory and learning.

Factors such as stress and depression have been shown to shrink the hippocampus, yet exercise and sex counteract this effect.

Furthermore, sex could actually be protecting our brain cells against decline.

‘There is some evidence that older people who are sexually active are less likely to have dementia and this could be for a variety of complex reasons,’ says Dr Ghosh.

‘MRI scans have shown that during orgasm the neurons in the brain are more active and use more oxygen,’ explains Barry Komisaruk, professor of psychology at Rutgers University and a leading authority on sex and neuroscience.

‘It appears that the more active the neurons, the more oxygen they withdraw from the blood — so more oxygenated blood is supplied to the region, delivering a fresh supply of nutrients.’

But as well as boosting brain cells, sex could also sharpen a woman’s mind, says Dr Ghosh. That’s due to a surge in sex hormones, particularly testosterone, which can help improve concentration and reaction times.

The lips are packed with nerve endings — 100 times more than the fingertips.

‘You’ll have much better sex if you kiss before intercourse,’ says Dr Ghosh.

It increases levels of the pleasure hormones and will make you a lot more receptive to what happens later.

‘That’s why loving sex can be more satisfying than a quickie — and that endorphin hit from dopamine is especially important for women.’

Orgasm (rather than sex) can block pain signals, says Professor Komisaruk. Research using laboratory animals and humans has found that orgasm can inhibit the release of pain transmitters from the spinal cord so they can’t reach the neurons in the brain that respond to pain.

In fact, he says, it can raise the pain threshold so much that the equivalent effect in morphine is three times the usual pain-relieving dose.

But experts say that for many people — especially women — the mind plays a key role in achieving orgasm.

While male brains tend to focus on the physical stimulation involved in sexual contact, the key to female arousal seems to be deep relaxation and a lack of anxiety.

‘There is a known circuit in the brain that’s involved in feeling happy,’ explains Paul Thompson, professor of neurology at the University of California, Los Angeles, and an expert in brain imaging.

‘This is called the limbic region, which is deep in the brain, and it’s more active when we’re rewarded. The same system is activated by sex, drugs, gambling — basically anything we enjoy.

‘Much of this deep brain circuit runs on the hormone dopamine. Anything pleasurable tends to cause these brain cells to exude more of it and this makes them fire faster.’

‘Without doubt, sex has not only physical but psychological and social benefits, too,’ says Dr Ghosh.

‘The endorphins released during sex can really help treat depression and clear the mind.

‘One is serotonin, also called the happy hormone, which creates a sense of bliss. People often say that sex is the last thing they feel like doing when they’re depressed, but do try it if you can.

‘And don’t worry if you get emotional afterwards — it’s very common to end up crying after sex. This is caused by a combination of endorphins being released and heightened emotions.’

If you’re struggling to nod off, it’s better to have sex than take a sleeping pill, says Dr Ghosh.

‘In fact, it’s more beneficial to have sex in the evening rather than the morning because the body wants to be relaxed afterwards, not get up and go to work.

‘By having sex at the end of the day you’ll reap more of the stress-relieving benefits. For a man, a powerful orgasm is the equivalent of having on average a 2-3mg shot of diazepam (or Valium).

‘That’s why so many men nod off afterwards — there really is a biological reason for this.’

Healing Oracle is made possible by the support of its readers. If you find the posts and resources useful, please consider making a contribution to support us (in any amount) so we can continue to inform and assist people around the world. We feel that giving a voice to those who have transformed their health, of that of a loved one, with alternative treatment is an important mission. Thank you for valuing our work and helping it to continue.To do this please visit our website https://www.facebook.com/healingoraclech

Be the first to comment on "Orgasms are a medicine ladies. Here is the science"