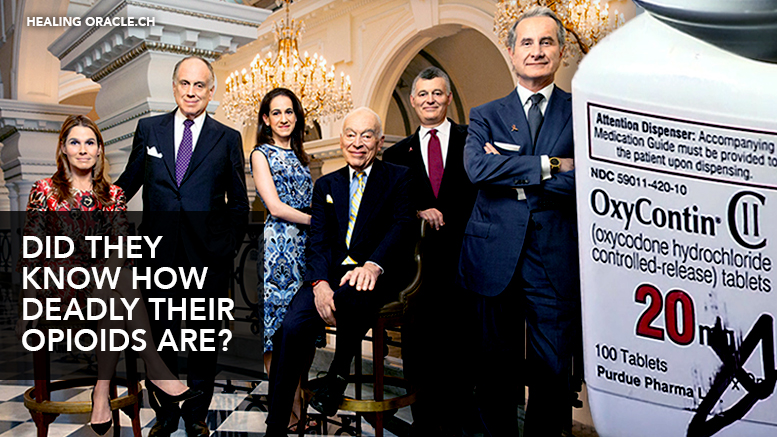 With more people in the USA dying from Opioids than guns, the Sackler family owned Purdue Pharma LP have made billions of dollars over the last decade, with the opioid crisis having reached epidemic proportions. Is their gold rush coming to an end, is it finally time to start counting the human costs to this heartless rampant commercialism?

Purdue Pharma LP are facing 16,000 court cases against them. Their opioids drug Oxycontin allegedly kills more people than Heroin and Cocaine combined and so the question really is, who is responsible for the millions of deaths that have resulted from these dangerous, highly addictive drugs?

CNN reported recently that one of these lawsuits state that Purdue Pharma LP knew that the drugs they openly sold and marketed were deadly and so engaged in a decade of deception, to push OxyContin on doctors and patients, publicly denying what internal documents show they privately knew: that the highly addictive drugs were resulting in overdoses and deaths.

Also Purdue examined selling overdose antidotes, including Narcan, as “complementary” products to the same doctors to whom it sold its opioids, the lawsuit claims, and although the company maintained a ledger of doctors it suspected of inappropriate opioid prescriptions and other forms of abuse, dubbed “Region Zero,” it continued to collect revenue from those doctors.

It’s a business decision to propel any utterly heartless Big Pharma operation into increased profits, by selling both the poison and the antidote.

And so the company is considering filing for bankruptcy. Such a move would seriously limit the amount the company faced in damages. Asset strip and exit?

Theoretically they could file for bankruptcy one day and be operational again, under a different name, the next.  But their internal strategies, of course, remain unclear, with so many lawsuits pending. They admit to having deep pockets and enough in reserve to face a future of legal battles against the many families that have suffered.

Who will face justice?

In the strict confines of legal definition, committing murder requires ‘malice aforethought’, premeditation before the act. If Purdue operated under a knowledge their business was selling deadly drugs, is this not logical to assume that is therefore aiding and abetting murder on a huge scale? This is of course in the hands of the courts over the coming months. Leaving the question of whether anyone actually will be prosecuted and sentenced for these corporate crimes.

All we can hope is that like the case of RoundUp and Monsanto there will be some justice for the victims and their families. Following the case of Dwayne Johnson where a Jury in San Francisco awarded $289 million in damages after he got terminal cancer from using Monsanto’s weedkiller Roundup .

(CNN)Pharmaceutical giant Purdue Pharma LP secretly pursued a plan, dubbed “Project Tango,” to become “an end-to-end pain provider” by selling both opioids and drugs to treat opioid addiction, all while owners on the board — members of one of America’s richest families — reaped more than $4 billion in opioid profits, according to a lawsuit newly unredacted on Thursday.

The suit says the company and its owners, the Sackler family, whose name adorns some of the most prestigious cultural institutions in the country.

The amended complaint containing redacted portions was filed in January by the attorney general’s office, and a Massachusetts state court judge ruled this week to release an unredacted version by Friday. The suit names Purdue, eight members of the Sackler family and nine other people currently or formerly associated with the company as defendants.

“For many years, Purdue, its executives, and members of the Sackler family have tried to shift the blame and hide their role in creating the opioid epidemic,” Massachusetts Attorney General Maura Healey said after the judge’s ruling. Her office didn’t comment further on Thursday.

Opioids, a class of pharmaceuticals that include prescription painkillers like OxyContin, morphine and fentanyl as well as illicit drugs like heroin, are at the root of an ongoing public-health crisis in America. In 2017, there were 47,600 opioid-linked drug fatalities in the United States — more than the number of deaths linked to breast cancer — according to the Centers for Disease Control and Prevention.

A spokesman for Purdue, Bob Josephson, said Thursday that the release of the unredacted complaint was “part of a continuing effort to single out Purdue, blame it for the entire opioid crisis, and try the case in the court of public opinion rather than the justice system.”

“Massachusetts seeks to publicly vilify Purdue, its executives, employees and directors while unfairly undermining the important work we have taken to address the opioid addiction crisis by taking out of context snippets from tens of millions of documents and grossly distorting their meaning. The complaint is riddled with demonstrably inaccurate allegations.”

The complaint also says consulting firm McKinsey & Co. played a crucial role in advising the company on how to push its product on doctors and boost its profits. At one point, the company’s sales staff told the Sacklers that new sales tactics would generate between $200 million and $400 million in additional sales of OxyConatin, according to an estimate provided by McKinsey, the complaint says.

“McKinsey had reported to Purdue on opportunities to increase prescriptions by convincing doctors that opioids provide ‘freedom’ and ‘peace of mind’ and give patients ‘the best possible chance to live a full and active life,'” according to the lawsuit.

“Purdue illustrated the end-to-end business model with a picture of a dark hole labeled ‘Pain treatment’ that a patient could fall into — and ‘Opioid addiction treatment’ waiting at the bottom,” the lawsuit says.

McKinsey would also analyze whether sales representatives were targeting prescribers who were “most susceptible to increasing opioid use,” staff told the Sacklers, the complaint says. The Sacklers were informed that McKinsey would study the use of “incentive compensation to push reps to generate more prescriptions.” In one sales quarter in 2013, the complaint says, Purdue’s 634 sales reps visited prescribers 177,773 times, with more than 2,400 of those visits in Massachusetts.

In one of the reports written by McKinsey, titled “Identifying Granular Growth Opportunities for OxyContin: First Board Update,” the firm urged the Sacklers to increase its sales reps’ annual quota of sales visits and emphasize “opioid savings cards.” The use of such cards increased the likelihood that patients would continue using opioids for extended periods of time, which “was especially dangerous for the patients and especially profitable for Purdue,” the lawsuit says.

Along with staff from Purdue, company CEO Craig Landau and McKinsey also strategized about how to “counter the emotional messages from mothers with teenagers that overdosed in [sic] OxyContin” by using messaging from patients that advocated for controlled-release drugs.

“As Landau knew at all relevant times, controlled or extended release opioids do not substantially control pain better than lower-dose, immediate release opioids. Rather, steering patients to high-dose OxyContin was a key part of Purdue’s deceptive marketing strategy,” the complaint says.

A spokesperson for McKinsey said Thursday: “We care deeply about the opioid crisis and the impact it has had on our communities. We just received the un-redacted complaint, and are working through its nearly 300 pages.”

Other portions of newly unredacted material show the Sacklers and other members of the board urging Purdue staff to pursue tactics to influence whom doctors the company saw as “key opinion leaders,” who could encourage other doctors to prescribe greater quantities of opioids, weighing whether the company should distribute free samples of opioids and questioning whether the sales reps were aggressive enough in their descriptions of the benefits of opioids.

Even with redactions, the lawsuit alleged that the Sacklers and other executives were behind Purdue’s decision to deceive doctors and patients. “In 1997, Richard Sackler, Kathe Sackler, and other Purdue executives determined — and recorded in secret internal correspondence — that doctors had the crucial misconception that OxyContin was weaker than morphine, which led them to prescribe OxyContin much more often, even as a substitute for Tylenol.”

The lawsuit describes former Purdue Chairman and President Richard Sackler as a micromanager constantly trying to push profits even as the opioid crisis was well underway. Sackler went to doctors’ offices with sales reps at times to push sales, according to court filings, and allegedly sought advertising that was aggressive and positive, even as executives at Purdue were concerned about how he was promoting the drug.

In 2001, the lawsuit says, Sackler in a confidential email disclosed “his solution to the overwhelming evidence of overdose and death: blame and stigmatize people who become addicted to opioids.”

“We have to hammer on the abusers in every way possible,” he wrote, according to the lawsuit. “They are the culprits and the problem. They are reckless criminals.”

The Sackler family, which Forbes estimates is worth approximately $13 billion, is well-known for its philanthropy around the world. The family name is on museums and galleries including The Metropolitan Museum of Art in New York, the Sackler Museum in Beijing and the Royal Academy in London.

There are ways of obtaining relief from pain naturally. Cannabis oil is an amazing pain medication. Please click here to find out more

IS CANNABIS DANGEROUS OR JUST A WONDERFUL MEDICINE?