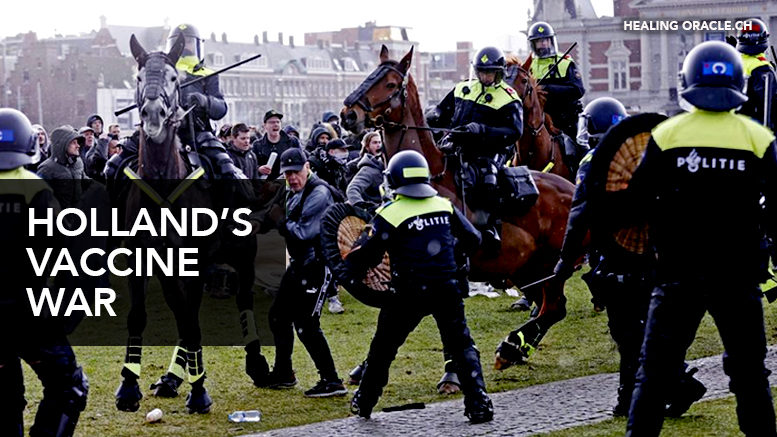 Last Saturday, 20th March 2021 in Museumplein, Amsterdams capital city a group of roughly 6,000 gathered to protest against the COVID-19 vaccine and the newly introduced global guidelines regarding the ongoing pandemic. They were heard to be chanting “freedom, love, no dictatorship”. 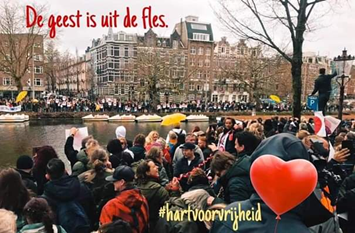 The protest began at 12pm these people were surrounded by a wide variety of residents from this city. The six thousand protestors were protected by retired veterans, current doctors, nurses and medical professionals who do not believe in COVID-19. This was a peaceful protest which escalated extremely quickly. The police started to gather around the protestors at 1.30pm, they were using megaphones demanding the protestors to leave Museumplein and if they were not to leave they were going to use force including the use of police dogs to remove them.

This group of peaceful protesters have been protesting for many weeks, with numbers rising each week. The previous weeks some of these people were subject to the horrendous police behaviour causing injuries and brutal force to remove them. This is why the veterans and medical professionals came to support and protect the peaceful people. One doctor in fact got arrested for this.

When the protestors rightfully decided that they were not going to leave as they had not been heard yet, the police took it upon themselves to take some action with force. This began with spraying very powerful water knocking them off their feet. The violence that the police officers used only got worse from this point onwards.

The protesters were moved into the city of Amsterdam, which led them to a street which had been blocked off at both ends. The police then began to deport people out of the city at around 2.30pm on trucks and buses. The police blocked all of the protestors in a street where they could not leave, holding them hostage for six to seven hours. You can see this in the image above.

Everytime this group met for a peaceful protest, many members were hurt. There are many videos of the chaotic scenes, one where the group are being chased by police on horses, innocent people being beaten with batons. The police are meant to serve the public and protect and here they are doing the complete opposite. Regardless of the topic of the protest, all members were peaceful. This is wrong on so many levels. The police allowed their dogs to brutally harm innocent people, for what reason?

There are countless photos and videos of the protesters seriously injured, every single event were all peaceful protests, it is outrageous that it escalated to this.

This pandemic has caused a lot of uproar to say the least. There are protests happening all over the world. All for exactly the same reason, but yet the media don’t like to cover the violence and inappropriate use of authority, is there something they are hiding?

Why do we have Quarantine when never in the history of infectious diseases have we Quarantined healthy people?

The Vaccine only allows for it’s use in the case of an EMERGENCY!

The Vaccine remains in Trials ONLY until 2023!

If lockdown and Quarantine ends, this ends the emergency administration of the Vaccine!

As things stand now, you, your children and loved ones are the trial for the vaccine!

This is the Only reason for quarantine and lockdown!

Hence it is now an endemic, which means it will NEVER end.