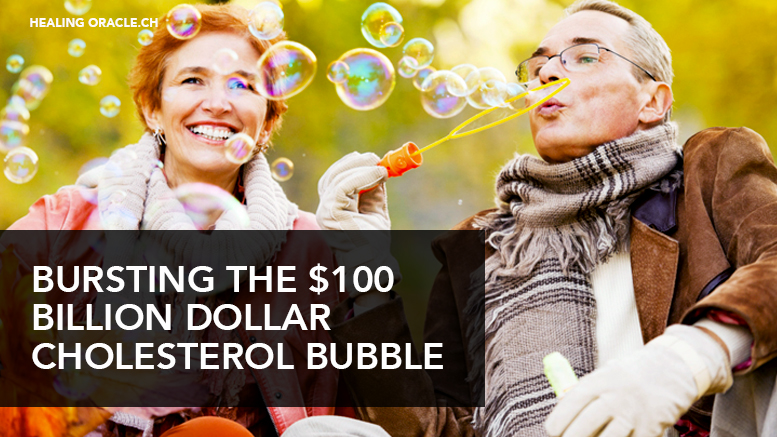 The Pharmaceutical Companies want every Senior Citizen on Statin Drugs as their Corporate owned media seeks to silence the doctors exposing the truth behind Cholesterol. Cholesterol-lowering statin drugs are a $100 billion-a-year industry, so there’s a lot at stake, on both sides.

As we have reported before, Big Pharma cannot afford for the Cholesterol bubble to burst,With some doctors even suggesting that statin drugs should be put into our water supplies and handed out to fast food customers!

Sales to date from this one particular cholesterol-lowering statin drug have exceeded $140 billion.

As we have seen, the Pharmaceutical companies have very deep pockets when it comes to their marketing budgets, with Big Pharma spending a whopping $ 6 Billion Dollars on advertising.

Lipitor benefited from the change in marketing laws in 1997 that allowed pharmaceutical companies in the U.S. to advertise their products directly to consumers.

Pfizer convinced an entire generation of Americans that they needed a pill to lower their cholesterol in order to prevent heart disease, in what may go down as one of the most brilliant and unethical marketing schemes of all time.

After Lipitor’s patent expired at the end of 2011, the FDA issued its first warnings against statin drugs, which include: liver injury, memory loss, diabetes, and muscle damage, among others.

Thousands of lawsuits against the maker of Lipitor followed.

For more of the research, please read:

Dr. Malcolm Kendrick, the Scottish doctor who wrote The Great Cholesterol Con recently stated on his blog that he has read the entire 116 page Japanese review:

This fact has become more difficult to demonstrate recently as so many people have been put on statins that the association between cholesterol levels and mortality has been twisted, bent and pummelled into the weirdest shapes imaginable.

Big Pharma cannot afford for the Cholesterol bubble to burst

However, with such a large segment of the American population moving into their senior years, the pharmaceutical industry’s attempt to keep seniors on cholesterol-lowering statin drugs continues unabated, and the largely pharma-funded corporate media is doing their part to silence doctors and other researchers who criticize the failed cholesterol theory of heart disease.

Dr. Malcolm Kendrick, had his entire Wikipedia entry deleted recently, in an obvious attempt to silence him as a new study was just published to try and justify putting more seniors on statin drugs.

Here are his comments on this “new” study.

Excerpts from his Response to the Lancet paper

A number of people have asked for my views on the Lancet Paper ‘Efficacy and safety of statin therapy in older people: a meta-analysis of individual participant data from 28 randomized controlled trials.’

This comes hot on the heels of a concerted effort to silence statin critics around the world by a coalition of “experts.”

I suspect the coordinated timing is more than a coincidence.

The editors of more than two dozen cardiology-related scientific journals around the world published an editorial on Monday to “sound the alarm that human lives are at stake” because of medical misinformation.

These physicians describe regularly encountering patients hesitant to take potentially lifesaving medications or adhere to other prescribed treatments because of something they read online. Or heard from friends. Or saw on television.

“There is a flood of bad information on the internet and social media that is hurting human beings,” said Dr. Joseph Hill, the architect of the essay and editor-in-chief of the American Heart Association journal Circulation. “It’s not just an annoyance, this actually puts people in harm’s way.”

The primary example illustrated in the editorial is the use of statins, a cholesterol-lowering medicine that can reduce heart attack and stroke risk in certain people. But doctors say too many of their patients shun taking statins because of bad information they picked up – often from politicians, celebrities and others who lack medical expertise.’ (Source.)

It was actually reported in various major newspapers.

The Times reported the study as: “Everyone over the age of 75 should be considered for cholesterol-lowering statins, experts have urged, after an analysis found up to 8,000 lives a year could be saved.”

The Telegraph had this to say: “Researchers said up to 8,000 deaths a year could be prevented if GPs simply prescribed drugs costing pennies a day.”

Essentially, they feel that certain issues, such as prescribing statins, are so vitally important that critics should be silenced.

It’s all based on Big Pharma’s data

The first thing to note is the source of the information. It was non other than the Cholesterol Treatment Triallists Collaboration (CTT) from Oxford. Run by Professor Sir Rory Collins and Professor Colin Baigent. They do almost all these meta-analyses on statins, because they hold all the data, no one else can really do them.

The CTT is in this hallowed position because they made a pact with Big Pharma to take hold of all the data on statins from all the pharmaceutical companies that manufacture statins and collate the data.

The CTT are very closely associated with the Oxford Clinical Trials Service Unit (CTSU) which is run by, and has employed, most of those in the CTT. Collins and Baigent etc. The CTSU is a clinical trials unit which, last time I looked, had obtained nearly £300 million in funding from the pharmaceutical industry for running clinical trials on various cholesterol lowering medications.

A fact that needs to be emphasised is that the CTT will not let anyone else see the data they hold. Including all the data on adverse events [side-effects] and serious adverse events. It is kept completely secret.

It’s all very conflicting and the fact the CTT has been paid, directly, or indirectly, a great deal of money by the pharmaceutical industry means their impartiality is very much in question.

Yes, they claimed to have done a meta-analysis of twenty-eight studies, yet they could only use data from fourteen to make their claims. The largest of which was the Heart Protection Study (HPS), carried out by, guess who, Rory Collins from the CTSU and CTT.

As for the actual data, it is the usual obfuscation, skirting as close to the direct lie as possible without crossing that line.

The study was not about age

The study was called. ‘Efficacy and safety of statin therapy in older people: a meta-analysis of individual participant data from 28 randomised controlled trials.’

However, in the Appendix to the Lancet paper it is made clear that five of the studies are a comparison of high dose vs. low dose statins. PROVE-IT, A to Z, TNT, IDEAL and SEARCH. They cannot be used to test the hypothesis that statins are beneficial in the over 75s vs. placebo, as they were not done to answer this question.

Also, in nine of the RCTs used in the meta-analysis there were 0% participants over the age of 75 at the start of the study. These were 4S, WOSCOPS, CARE, Post CABG, AFCAPS/TexCaps, ALERT, LIPID, ASPEN and MEGA.

So why call it ‘Efficacy and safety of statin therapy in older people: a meta-analysis of individual participant data from 28 randomised controlled trials’? If that was not the actual point of the study?

The Great Cholesterol Con
The Truth About What Really Causes Heart Disease and How to Avoid It
by Dr. Malcolm Kendrick

And HEART OF THE MATTER Part 1: The Cholesterol Myth: Dietary Villains