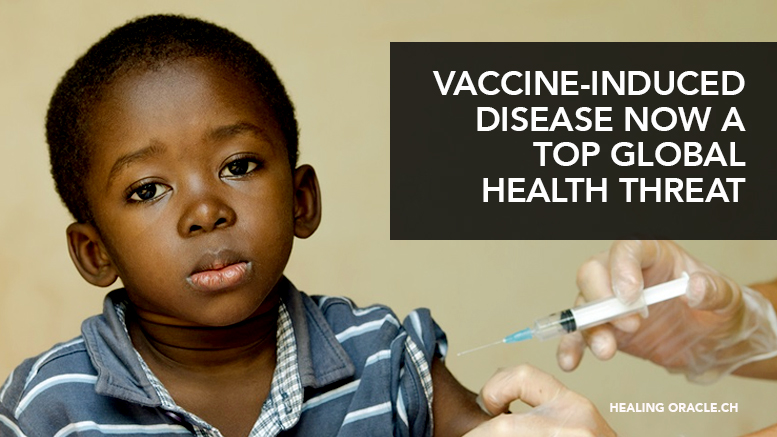 Contrary to what the propaganda-spreading World Health Organization (WHO) purports, modern day vaccines are responsible for more deaths than the diseases they are intended to create immunity against.

This is a fact based on sound science. Let’s review some examples, and then we’ll discuss shedding – the common way infectious diseases are spread by children and teens during the first two weeks after they are injected with multiple strains of diseases, when their own immune systems are severely compromised, as are the other vaccinated children around them.

First off, there have been 127 deaths caused by the measles vaccine in the past 15 years, but only 2 deaths caused by the measles disease itself. Secondly, just take a look at GlaxoSmithKline’s (GSK) 6-in-1 jab called “Infanrix Hexa” (meaning six diseases are injected into a baby’s muscle tissue all at once – a science phenomena no studies have ever shown to be safe).

That toxic GSK hexa-jab has killed three dozen infants already, and over 2,000 reports have flooded in regarding adverse reactions (of which 500 were termed “serious”). This immunization combo is deadly, but the mass media has buried these reports, as usual, so hardly a soul knows to avoid this shot like the modern-day plague.

Then there’s the most toxic and deadly vaccine of all – the influenza vaccine, a.k.a. the flu shot. Damage from the flu shot is responsible for the majority of the secretive vaccine court’s payouts in settlements that have breached a mind-blowing (pun intended) $4 billion (the number increased vastly since 2016). Yes, you read that right.

Recently, a Las Vegas man became paralyzed and blind the day after he got the flu jab. Could it be because many flu shots still contain up to 50 parts per million (ppm) of mercury, listed as “thimerosal?” The guy was perfectly healthy before he got the vaccine. Now he can’t breathe, speak, or walk on his own anymore. Is the vaccine worth the risk? Most people with even a partially functional immune system can beat the flu in a few days.

No doubt the flu vaccine itself is a global health threat, especially since the CDC recommends it for pregnant women. Is there a coupon in the vaccine insert for Planned Parenthood that comes with that jab? If so, New York State will be the first to offer that deal.

Folks, “safety in numbers” is a myth. You think it’s safe for your babies to sit and wait with you in a doctor’s office waiting room, playing with germ-laden toys, while everyone around you is contaminated with the flu, hepatitis B, and other viruses they’re shedding from the vaccines they recently got jabbed into their muscle tissue?

All vaccine proponents always blame unvaccinated children or teens when a disease starts spreading around a school, theme park, or college. Why? That’s what they hear on TV, read in the MSM lying newspapers, or heard from their doctor or nurse, who got the script straight from Big Pharma.

It’s all fear-based propaganda to sell more toxic vaccines. Now the World Health Organization is spreading hyper-propaganda about the unvaccinated people of the world being one of the greatest health threats to society, when actually the opposite is the case.

Watch this short video and learn why you should fear vaccines and the vaccinated children much more than you should ever worry about the people who avoid getting those toxic jabs:

Stop putting your trust in a medical society that profits greatly from you and your family’s sicknesses, and makes zero money from your good health. It’s just common sense. Are you the sheeple in the herd that’s spreading the diseases you’re so afraid to get – the very ones that are swimming in your blood and shedding from your mucus and saliva right now?

The most dangerous time for spreading infectious disease is the first 14 days after a person is injected with that immunization that contains genetically modified versions of the virus, often mixed in dangerous, experimental, untested combinations. The viruses are NOT dead, they are just hibernating inside a formaldehyde formula, waiting to be fed.

The polio vaccine (injected or given as nasal spray) causes new polio cases, including spreading it to the siblings of those vaccinated. The same happens after the measles and flu shots – the disease is shed and spread. History has proven a huge spike in crippled children (47,000 cases reported in India alone in 2011) right after receiving the oral polio vaccine. This means polio vaccines are the leading cause of polio paralysis. Do you really want to wander around in that sickened flock? So much for safety in numbers, huh?

Want to build your immunity (or your children’s) to infectious diseases, pathogens, parasites, viruses, and bacteria, instead of weakening your immunity while spreading all of those infections? Look into natural remedies like elderberry (great for the flu), Vitamin D, Vitamin C, oil of oregano, garlic, cinnamon, licorice root, blackberry seed oil, and of course, colloidal silver. Check out Vaccines.news for more updates on immune system killers that the WHO does NOT want you to know about. This has been a public service announcement from Natural News.

COLONOSCOPY’S ARE LETHAL AND DO NOT DETECT CANCER

NEW STUDY SHOWS HOW STAYING INDOORS IS BAD FOR YOUR BRAIN﻿

IMMUNOTHERAPY KNOWN AS GCMAF IS PROVEN EFFECTIVE AGAINST CANCER, AUTISM AND ALL TERMINAL ILLNESSES