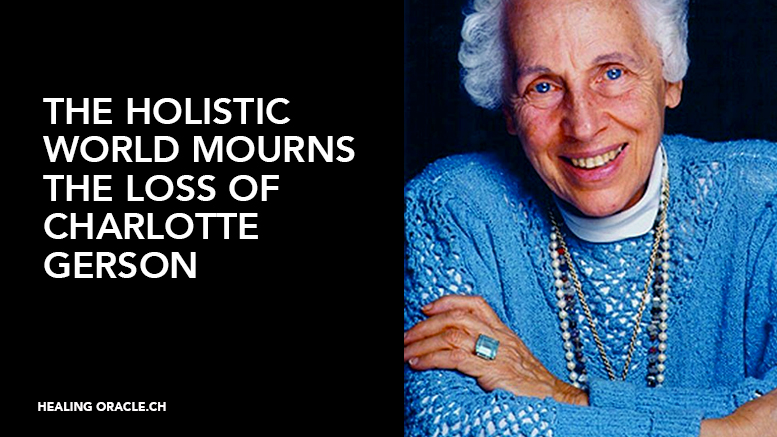 It is with a heavy heart that we report on the sad loss of Charlotte Gerson who died naturally in her sleep at home. She lived 96 wonderful long years. She was a great force in the natural health movement, sharing her work and knowledge, ensuring the Gerson legacy continues and grows in strength.

According to Gersonmedia.com: “When Charlotte Gerson was 12 years old, she was healed of tuberculosis by her father, Dr. Max Gerson (89), she had the longest survival record of anyone treated by the Gerson therapy.”

Howard Straus said of his mother Charlotte: “There are people all over the world who love her and whose lives have been changed by the Gerson Therapy.”

He posted this message on the Gerson Therapy Facebook Group announcing his mothers passing:

“She was not in pain, but it was clearly her time and she just “slipped away.” I believe that with the amount of good that she did in the world, her onward journey will be filled with light and love… If you are one of the tens of thousands of people worldwide who have benefited from her work and you would like to support it for future generations, her family requests that you contribute to the Max Gerson Foundation.”

Using PayPal, you can tag your donation to paypal@maxgersonfoundation.org

Following the news of her passing we spoke with Dr Patrick Vickers of the Northern Baja Healing Center in Tijuana Mexico, who knew Charlotte personally and is an old friend, he was deeply saddened by the loss.

Dr Vickers will continue using the Gerson Therapy at his clinic in Mexico, where he has actually advanced the Gerson therapy to achieve greater results in treating cancer and other ailments, with great success, by adding Hyperbaric Oxygen, Ozone therapy, immunotherapy, as well as much more and at a budget that is more affordable than any other clinic we have found.

Max Gerson and the history of the Gerson therapy

Born in Wągrowiec, (Poland, under German partition) in 1881, Max Gerson studied medicine at the University of Freiburg from 1899-1906. While a student, Max Gerson suffered from severe, debilitating migraine headaches that left him unable to function for days. With his professors of medicine unable to help him, Max Gerson set out to cure himself of his condition by making dramatic changes to his diet and adding specific natural supplements. He eliminated the heavily salted, processed, fatty foods and meat that were a major component of the standard German diet and replaced them with raw and cooked, unsalted, organic fruits and vegetables. Within a matter of weeks the migraines disappeared.

Now graduated, and practicing in Bielefeld, Germany, Dr. Gerson was successfully applying his “migraine” diet to his patients when one returned to him completely cured of his skin tuberculosis. This success caught the attention of world renowned thoracic surgeon, Ferdinand Sauerbruch and, together Gerson and Sauerbruch commenced a study of the diet on 460 terminal tuberculosis patients. Of the 460 patients treated on the Gerson therapy, 456 were completely cured making Gerson a household name throughout all of Europe.

With Hitlers rise to power, Dr. Gerson (a German Jew) fled Germany while narrowly escaping his own death in the Holocaust. After briefly fleeing to France, Dr, Gerson eventually made his way to the United States where he set up practice on Park Avenue in Manhattan. Dr. Gerson lost all of his seven siblings in the Holocaust.

While practicing in Manhattan, Dr. Gerson was approached by a woman dying of stomach and gall bladder cancer. Having heard of his famous tuberculosis treatment, she implored him to apply it in her case but Dr. Gerson refused due to the enormous political pressure he knew he would eventually face from his colleagues….after continual pleas from the woman Dr. Gerson finally agreed to treat her in secret….and she, too, was cured. From that moment on Dr. Gerson admitted that he could no longer turn his face away from this deadly scourge of cancer and began to treat people given up to die by their medical doctors… many of which he also cured.

Rapidly, Gersons name began to spread and as a consequence, on July1-3 1946, he was called to testify before the United States Senate at a hearing for the Pepper- Neely Anticancer Bill which was designed to appropriate 100 million dollars in funding for anyone who could show promise in the realm of cancer treatment. Gerson presented five of his formerly “terminal” patients before the committee and the complete records of five more. So shocked were those in the room that renowned ABC news broadcaster, Raymond Gram Swing, present at the testimony, went on his national radio broadcast that night and announced to the entire nation that a cure for cancer had been discovered. Unfortunately the dark forces of medicine were also listening and from that point on Dr. Gerson became a marked and censured man and the Pepper-Neely Anticancer Bill (document # 8947 of the United States archives) was defeated by four senators who were medical doctors.

Over the next 13 years, Dr. Gerson would lose his membership privileges to the New York State Medical Society, be prohibited from publishing his work in peer-reviewed medical journals and, ultimately, ostracized by medical and pharmaceutical industry more interested in preserving vast pharmaceutical profits then curing a dying and suffering humanity.