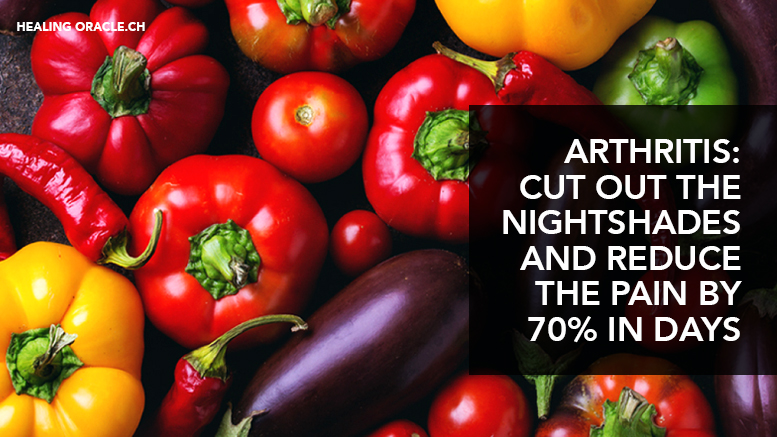 The Nightshades are a specific group of plants belonging to the Solanaceae family which includes over 2,000 species. They are also some of the most popular foods consumed today; they include tomatoes, potatoes, all types of peppers, and eggplant.

Not truly a nightshade member but containing the same inflammation-inducing alkaloids are blueberries, huckleberries, goji berries and ashwaganda (Indian Ginseng).

Nightshades induce inflammation through a specific chemical known as solanine. Researchers now believe this chemical may actually irritate the gastrointestinal tract. When it’s absorbed into the bloodstream, it can cause destruction of the oxygen-carrying red blood cells. Solanine is known as an aceytlcholinesterase inhibitor – it acts to prevent the breakdown of the neurotransmitter acetylcholine (ACh), leading to excessive build-up of ACh in nerve receptor sites. This action allows for constant over-stimulation of Ach receptors, especially within the nervous system, as it’s responsible for stimulating the parasympathetic nervous system.

Solanines are not water soluble, are not destroyed by cooking, and are not broken down inside the body, but must be excreted as alpha-solanine. Alpha-solanine is classified as a neuro-toxin. Interestingly most “foods” that contain alpha-solanine also contain at least 5 other neurotoxins including atropine and nicotine.

One of the major problems attributed to nightshades is arthritis. In fact, one in three arthritics will react badly to nightshades. Some researchers believe that arthritis is often misdiagnosed in people who may in fact only be experiencing the effects of nightshade consumption. Alkaloids appear to affect the metabolism of calcium. Though not yet understood how, nightshade foods may remove calcium from bones and deposit it in soft tissue, setting the stage for arthritis. For this reason, researchers have recommended that all individuals with osteoarthritis, rheumatoid arthritis or other joint problems like gout eliminate nightshade foods from their diet.

Norman F. Childers, PhD, is the founder of the Arthritis Nightshades Research Foundation. He has the following to say on this subject:

“Diet appears to be a factor in the etiology of arthritis based on surveys of over 1400 volunteers during a 20-year period. Plants in the drug family, Solanaceae (nightshades) are an important causative factor in arthritis in sensitive people.”

The primary cause of the reactions in some people is the presence of an alkaloid called tropane which many are very sensitive to.

Eliminating nightshades from my diet has had a profound effect on my health. In 2006 I completely eliminated all nightshades from my diet. The first big change I noticed was that I no longer needed an inhaler. I had been diagnosed with reactive airways disease ten years’ earlier and used inhalers on almost a daily basis. My need for inhalers decreased dramatically, until two weeks later, when I noticed I hadn’t used an inhaler at all. Six years later, I have never had the need for an inhaler. Within three months of eliminating nightshades, I noticed that the knee pain and leg weakness I had on a daily basis was also completely gone.

For those that suffer from arthritis or an arthritis related disease such as lupus, rheumatism, and other musculoskeletal pain disorders members of the Solanaceae family of flowering plants, more commonly known as nightshades, may be adversely affecting their health.

Soy sauce made in the U.S. is generally made with genetically modified (GMO) soy beans, which are cut with the nightshade plant Petunia. A healthier option is to purchase Braggs Amino Acids at your health food store. It is naturally-fermented soy sauce and the only other ingredient is spring water….it tastes exactly the same as other soy sauces only this one is pure.

Note: The condiments black/white pepper and pepper corns are NOT nightshades

Other Ingredients / Products to Avoid:

-Read labels carefully because you could be doing everything else right, and still be sabotaged by one small amount of an ingredient.
-Never buy a food that uses the generic term of seasoning or spices, because you won’t know what is really in your food.

If you want to know if nightshades negatively affect you, take the three month challenge. Avoid all nightshades for three months. (It’s called a challenge for a reason).Be careful to note the previous nightshade list, and become a label reader as some homeopathic, prescriptions; over the counter medications as well as numerous processed foods contain nightshades. Prescriptions and over the counter medicines may require a discussion with your pharmacist or a phone call to the manufacturer of your over the counter medicines. After three months begin to reintroduce one nightshade at a time. Take note of any aches, pains, stiffness, and loss of energy, headaches, respiratory problems or any other symptoms. You may find as I did, that the quality of your daily health will dramatically improve after eliminating nightshades from your diet.

The Cost of Pain

A report released on June 29, 2011 from the Institute of Medicine of the National Academies shows that 116 million adult Americans (one third of the population) live with some level of daily pain. This is more than the number of people with cancer, diabetes and heart disease combined. The cost to the U.S. is upwards of $635 billion dollars a year. These costs come from direct medical expenses, disability, lost wages and loss of productivity.

Be the first to comment on "ARTHRITIS: CUT OUT THE NIGHTSHADES AND REDUCE THE PAIN BY 70% IN DAYS"