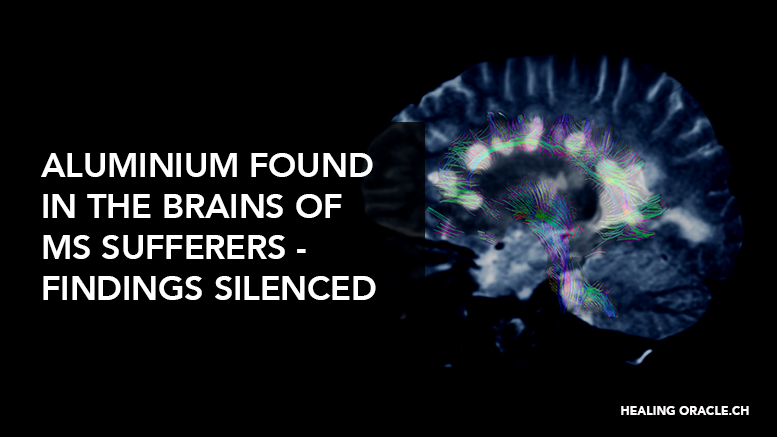 It has long been known in medical circles that once Aluminium gets into the bloodstream, it can cause many serious neurological health issues, ranging from MS, to autism and brain cancer.

So why, we ask are these findings being buried and why does it continue to appear in vaccines?

In a new case series study (when a collection of patients is studied together), brain tissue from 14 MS donors was studied in a case series by Mold et al (2018) using THGFAAS (transversely heated graphite furnace atomic absorption spectrometry). Unsurprisingly they found the presence of aluminium, but it was also found in ALL areas of the brain. Not only this, but it was in a high amount (>10 ug/g dry weight), with some areas exceeding 50 ug/g. They found aluminium both within the brain cells and in the interstitium between the cells.

Granted, further larger studies would be needed, as this was a Case series study with a typically small sample size and it is generally understood that larger studies will be necessary to determine the data more accurately. But why is this information buried? Why do the vaccinations continue to contain aluminium, despite these findings?

The link between aluminium and MS is well documented. Whilst, animal studies routinely induced MS in the animals that are injected with aluminium hydroxide.

The same team had previously found high amounts of aluminum in the brains of people with Autism, and and in patients with Alzheimer’s disease.

When France brought in HepB vaccinations from 1994 to 1997 (which contains aluminium hydroxide), cases of MS increased and when they stopped recommending the vaccine, the rate of HepB vaccine-associated MS cases dropped to near zero

In his article on this subject, Chris of the family Masters  also goes on to say:

“So much evidence exists that points to aluminium as a source of strange new conditions of unknown causes, such as MMF and Gulf War Syndrome, surely one would think that calls to reconsider the use of aluminium in vaccines would be answered…

What is surprising is the lack of action on the part of the US FDA to put an end to the use of this dangerous metal in vaccines in the USA, and that the NIH is not even funding any more of these studies.”

The logical thing to do here is that the “NIH fund studies to determine how to most safely remove aluminium from anyone exposed to it.”

As there are also many proven forms of aluminium removal. As stated below.

“What is also surprising is that the CDC and ACIP remain blithe to the morbidity and mortality that their continued approval of vaccines containing metals like aluminium and mercury causes.

They make decisions on behalf of us all, and yet every member of The ACIP with the exception of one military member has conflicts of interest with vaccine manufacturers. The ACIP should review all of the literature on aluminum and make recommendations on how to phase it, and thimerosal, out of vaccines completely.”

We agree that other approaches like the following should also be tested in randomized clinical trails in clinical populations known to be afflicted with aluminium intoxication (autism, Alzheimer’s, MS):

Further inaction on the part of these regulatory and funding agencies, and active ‘denialism’ at this point will surely be seen by future generations as both callous disregard and where conflicts of interest reside, due complicity.

The study, conducted at the Keele University, was funded in part by the Children’s Medical Safety Research Institute.