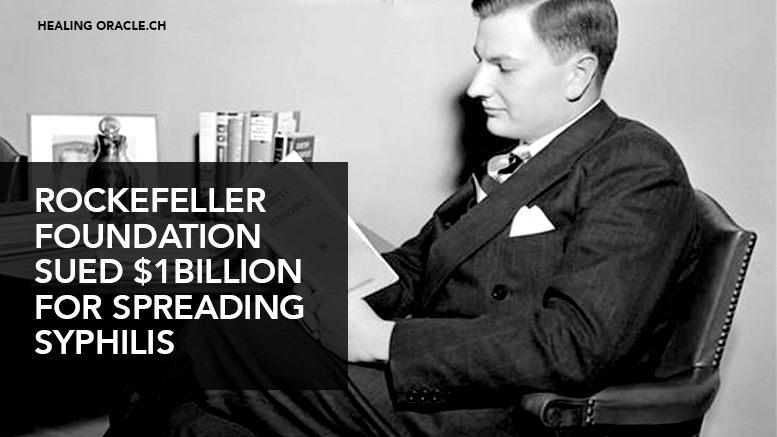 It may well have been 70 years ago, but a story of a big medical company experimenting on the innocent, in order to test out new drugs, sounds like a story from today. In this case it was syphilis in Guatemala in the 1940’s, the drug was penicillin and involved the very powerful Rockefeller Foundation.

Generally speaking, when we see lawsuits filed and court cases active, we expect them to be for relatively recent issues fresh on people’s minds and not something that occurred well over 70 years ago. That being said, the Rockefeller Foundation is currently facing a $1 billion lawsuit for a situation that occurred over seven decades ago.

A Maryland federal judge allowed a lawsuit against The Johns Hopkins University, Bristol-Myers Squibb Co (BMY.N) and the Rockefeller Foundation after a shocking discovery was made.

These organizations helped the United States government conduct illegal experiments on unsuspecting citizens back in the 1940’s that led to many undesirable and dangerous consequences.

The intention was to stop the spread of sexually-transmitted diseases, and the result was over 400 people getting sick. According to reports, a United States District Judge, Theodore Chuang, made a huge decision on January 4th, 2019, by rejecting defendant arguments claiming that a recent Supreme Court decision shielded foreign corporations from lawsuits in the United States courts over human rights abuses abroad, and that it also applied to domestic corporations absent Congressional authorization.

Judge Chuang’s decision is a clear victory for 444 victims and their relatives and loved ones suing over the questionable and harmful experiment. (3)

What Was The 1940 Rockefeller Experiment?

The issue for which Rockefeller is being sued is quite substantial. The experiment apparently echoed the government’s Tuskegee study, specifically on black American men who were later deliberately left untreated for syphilis, a sexually transmitted infection, despite the fact that penicillin had been discovered.

The entire situation was kept completely secret for decades, all until a simple professor at Wellesley College in Massachusetts discovered the glaring issue back in 2010.

United States officials have apologized for the experiment, with President Barack Obama having personally called the Guatemalan president to offer a formal apology, but there are many wrongs that still needed to be righted.

According to Judge Chuang, lawsuits filed against the United States corporations under the federal Alien Tort Statute were not “categorically foreclosed” by the Supreme Court decision on April 24th of 2018 in Jesner v Arab Bank Plc covering foreign corporations.

Judge Chuang said that the “need for judicial caution” was “markedly reduced” when United States corporations were defendants since there was no real threat of diplomatic tension or objections from foreign governments. Additionally, Judge Chuang said that allowing the Guatemala case proceeds would “promote harmony” by allowing other foreign plaintiffs a chance to remedy situations in United States courtrooms.

According to the Johns Hopkins University, “Johns Hopkins expresses profound sympathy for individuals and families impacted by the deplorable 1940’s syphilis study funded and conducted by the U.S. government in Guatemala.

We respect the legal process, and we will continue to vigorously defend the lawsuit.” As for Rockefeller, a spokesman said that the lawsuit had no merit since the non-profit did not know about, design, fund or manage the experiment, and the Bristol-Myers spokesman Brian Castelli declined a comment whatsoever.

It should perhaps give any wrongfully-treated citizens and non-citizens of the United States hope to see an experiment from well over 70 years ago addressed and reexamined in this way. Several Hopkins and Rockefeller Foundation doctors were directly involved with the 1940 experiment, helping to show that even powerful corporations of today aren’t immune to the consequences of harm they’ve caused in the past. Hopefully, the judicial system discovers the truth of the situation, and is, therefore, able to bring about proper justice.