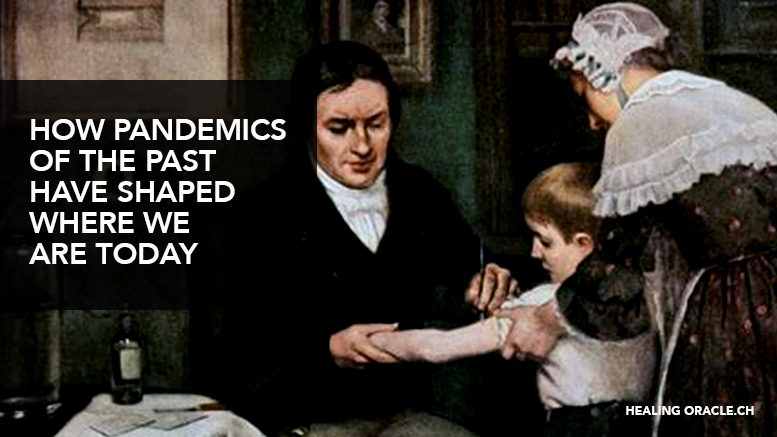 COVID19 is not the first pandemic ‘unleashed’ upon mankind.

In fact, diseases have long been the tools of suppression, fear and propaganda – tracing the lamentable catalogue of corrupting the microbe, we can go right back to the dark ages and colonial era to see how disease was first used as weapon against the masses.

For instance, smallpox was first militarised in the French-Indian wars between 1754 and 1767. The French commander of Fort Pitt intentionally distributed the blankets of infected smallpox patients out to the native population – wiping out 50% of the tribes in the years to follow. A cunning ploy for any dictator you may think.

Today, the scenario has taken-up a capitalist facade. For instance, the UK quietly and with zero media attention passed laws last year that states jail time for those who say ‘No’ to the vaccine.

Only time will tell as to what havoc this could cause to humanity. Never before has it been seen to this scale and across so many borders as now. And now as a result and after a year of fear mongering and promotion a new and untested vaccine is sweeping the world and everybody has to have it in order that society return to normal and that children return to school. .

So let’s take a quick look back in time and see what pandemics have helped shape our modern perception of disease, whilst also provided research and data for todays mass media targeting and relentless pressure towards the vaccine.

Here are 3 historical pandemics that helped shape where we are today:

In 430 B.C., a strange illness began surfacing amongst the people of Libya, Ethiopia and Egypt. The symptoms included fevers, chills, thirst, bloody throat and tongue, and skin lesions. The disease was so severe that it led to the ultimate defeat of Athenians at the hands of the Spartans.

It is one of the earliest recorded pandemics, known to have surfaced during the Peloponnesian war. Does this not also sound like an early form of military force and biological warfare?

Probably the worst known pandemic outbreak in mankind’s history is the bubonic plague. It is said to have claimed the lives of approximately one third of the world’s population.

The bubonic plague is thought to have begun in Sicily in 1347 A.D. when some infected travellers arrived at the dock of Messina. It then spread like wildfire in Europe and North America via the routes taken by explorers. England & France were probably the worst-hit countries – so effective was this biological weapon that both countries were forced to sign a truce during the war, and re-order their collapsing internal system.

Suddenly huge economies could be controlled by tiny viruses.

The symptoms of the plague included fever, chills, swollen lymph nodes (buboes), rotting skin, and pneumonia. It was said to have been spread through the bites of rodents and fleas, making city centres and food collection hotspots the trigger points for the diseases.

Many people might not know this, but the ‘superpowers’ of the time had the bubonic plague captured, studied and ultimately weaponized, as this biological weapon became a powerful tool in the hands of those that truly understood its power.

Vaccinations are of course tiny doses of the same virus. Get a jab, out you go, back into the world while you shed the virus to all and sundry. Shedding takes place for at least several days after a vaccine. So why do we not also understand that a vaccine is also an excellent way to spread a virus from the vaccinated to the unvaccinated?

It is unclear where the Spanish Flu began, but one thing we are led to believe is that it was the deadliest ever pandemic outbreak known to humankind. Which of course sets the ground for further outbreaks. As Biill Gates said the next wars will not be nuclear, but microscopic.

Caused by H1N1 Influenza A Virus, this disease was incredibly lethal and hit society in 4 consecutive waves. While natural and allopathic treatment is now available for the influenza virus, it was once used covertly to wage war against the people, as another example of the power of biological weapons that do not have the overheads of costly military equipment.

Even though simple, cost-effective treatments can be developed for the fight against Covid 19 – whilst simple, safe, cheap treatments like Chlorine Oxide with a 100% cure rate in Ecuador the vaccines are now here and we must ignore all sense of perspective in order to obtain the untested jabs that have been rushed to market in a way that really must not go unchallenged. Whilst good old Bill wants every single one of us vaccinated. That’s a big investment. That’s a lot of dollars.

In terms of grand movie plots, this is an amazing story line. But of course we do not know the future, we do not know how well humanity will cope with this new era of change, these constant waves of pshycological and microscopic state sponsored abuse will fare on the worlds population.

Where next for humanity we wonder.

Will corporate greed win true? Will we see RNA vaccine cause a decrease in fertility? Will we see a huge spike in autism, dementia, cancer and other diseases of the immune system?
Please stay safe by eating the right foods, getting essential minerals, vitamins and vitamin D on a daily basis and stay positive.

Stay tuned and spread the word.