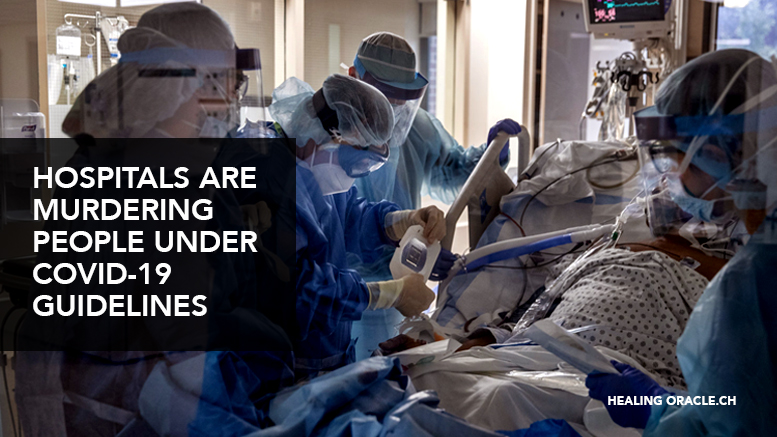 It is with a heavy heart that we report on these revelations. Life would be a lot easier if we could just report on the great stories of medicine and the amazing ground breaking health stories and discoveries of so many wonderful remedies that we also cover. But we live in unprecedented times and so we must deal with the darkness whilst we fight for the light.

As in amongst the bad, there is some good and for example we reported this week preliminary data from a clinical trial involving more than 100 covid-19 patients in Ecuador resulted in a claimed 100 percent cure rate within four days, according to Andreas Kalcker who is closely following the results of the effort. The tests were carried out by the Asociacion Ecuatoriana de Medicos Expertos en Medicina Integrativa, a group of integrative medicine practitioners. So why are people dying? How are the numbers reported so high? As what we appear in other places is far more sinister and far less caring.

Read this Tweet and response below. This is so very typical of what we were seeing a month ago. Completely fictitious news stories broadcast to control the people and maintain the lockdown, but in the case, the response was rapid and clear:

And so we have also seen other nurses stating that what the media is saying is not what they were seeing:

And this is not just from nurses, but from other areas of the industry responsible for fudging these numbers:

It is outrageous of course that the public has been lied to on such a degree and that we are witnessing the collapse of industries and livelihoods off the back of it.

But did we also know that it is leading to genocide?

Please note: We are a small, independent group, we are not controlled by advertising revenue, or dictated to by sponsors. In fact, we are under attack a lot of the time and of course made to look foolish and fake by the Fact checkers and trolls that scour the digital space. But should any of this information be proven to be untrue then we will take it down. We have nothing to gain from telling lies. We don’t need to.

New York – the “epicentre of the epicentre”

If you have not seen nurse Erin Marie Olszewski’s story before then you need to. Erin was not employed by a News channel, she is not a journalist, she does not work for the Police, or the FBI and she was not hired by the victim’s families to investigate and expose these crimes.

She did this of her own free will and against her own self interests. But in doing what she did, by wearing a recording device during her shifts, she has created a truly shocking eye witness account of events at the very heart of the so called pandemic.

Erin is unique in that she has witnessed and worked in both the hospital with the most deaths attributed to Covid-19, and also where there have been the least.

Her nursing journey has led her to a knowledge and understanding of how to treat and care for “CoVid-19” patients, to heal them and send them home free from whatever condition they came in with. Her previous hospital in Florida, treated their patients with care and attention and used protocals of Hydroxychloroquine, Zinc and high dose Vitamin C to successfully treat and cure all of her patients. They treated patients as individuals and cared for them individually.

She did not have a single death before she was enlisted to a poorer Public hospital in New York, the “epicenter of the epicenter” itself as it was labelled by the media, at the infamous Elmhurst in Queens. It was here in this hospital that she was suddenly faced with the stark opposite to the experiences of care that she had enjoyed in the hospital in Florida and shows us an explanation as to how they were recording such incredibly high numbers of deaths.

What has happened to humanity if we allow this to become the ‘new normal?’

This isn’t just twisting numbers for political gain; this is cold blooded murder in the first degree.

The legal definition of murder is that your actions caused a person to die act with full and prior knowledge of that person’s life would end, it is called “malice a forethought”. Whist to wilfully and prematurely end many people’s lives is mass murder, and its happening today, in emergency Intensive Care Units right now, in towns and cities across the world.

Why are the media not covering these stories and holding people accountable? Why are they busy distracting us all the time and covering this up? Why is this hospital still open and not under investigation for the very fact that this video has even been made? Had this been an isolated story even just a few months ago, the world would have been in shock. So why are the governors and politicians that forced so many ventilators being installed not under arrest, or suspended pending an investigation whilst they compile evidence to attempt to put an end to it?

When these crimes are committed on such a vast scale, is it then that we as humans feel powerless to prevent it? So afraid and trained as we are by authority and the trappings of modern life. So confused by the different stories and mind games that we don’t even know how to stand up for our own rights anymore? To defend our elderly and to care for our own.

Why also are not seeing more nurses coming forward and telling this story?

See this screenshot below: 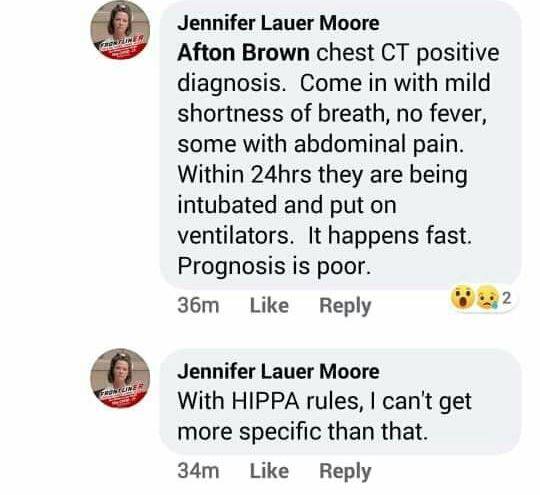 HIPPA was set up to protect the sick and the innocent. But like all rules of silence they were really written to protect of the interests of the corporate entity. Guidelines and cover can lead an entire system to corrode, whilst such systemic abuse leads to a situration where peole are indeed dying in large numbers. But its certainly not a virus that’s doing it.

Is this not anarchy of the highest form? A lawlessness created by the legal system, with one standard for them and another for the rest of us?

And so any nurse, or medical professional thinking of coming forward is threated with losing their job, their licence, their livelihood, even their homes and if they have a family then they must also consider them.

Any one who questions the rules can be replaced by someone with less knowledge and less experience, who will follow and implement the rules and never question the ethics.

In this light, is Erin not a hero for talking about these things when you consider what she has done?

Please watch this video from the UK where a woman explains how she witnessed the NHS murder her father and has now allegedly reported it to police. She has a crime number and plans to sue the government, if they do what she suspects and put his death down to Covid:

Now, if this is not enough, please watch retired Dr Vernon Coleman MB ChB DSc FRSA explain how and why thousands of old people have been murdered for the same political reason. As he explains hospitals dumped thousands of coronavirus patients into care homes leaving vulnerable, sick old people unprotected and at their mercy.

In many countries more than half of all corona virus deaths were in care homes.

What has happened to humanity to think that just because someone is old, that means they are automatically weak and sick? If an elderly person is healthy and has a good diet, there is no reason what so ever to assume they are also frail and weak, or a drain on society.

Again this not just isolated to the Western word, in South and Central America, in even poorer hospitals, where there are no ventilators, they are resorting to lethal injection in what they see as justifiable cause.

We are seeing personal accounts of healthy young people being admitted to hospital with minor symptoms such as a cough or a cold, never coming out again. Never seeing their family again.

In Ecuador for example, case numbers are rising, yet there are no facilities for testing, as assumption has taken over common sense to such a degree that it is leading to many unnecessary deaths of both the young and the old.

Anyone that should even have so much as a cough, or a fever must be aware of the very real dangers of attending a hospital.

Since when did a cough, or a chest infection become enough of a reason to give the otherwise healthy patient enough “antibiotics” to kill them?

Has this not gone far enough now? How much longer can this continue?
Is it until the vaccine is upon us? Will this lead to further cases and death?

So please consider the consequences and your actions before you think the hospital is there to help you and has your best interests at heart. 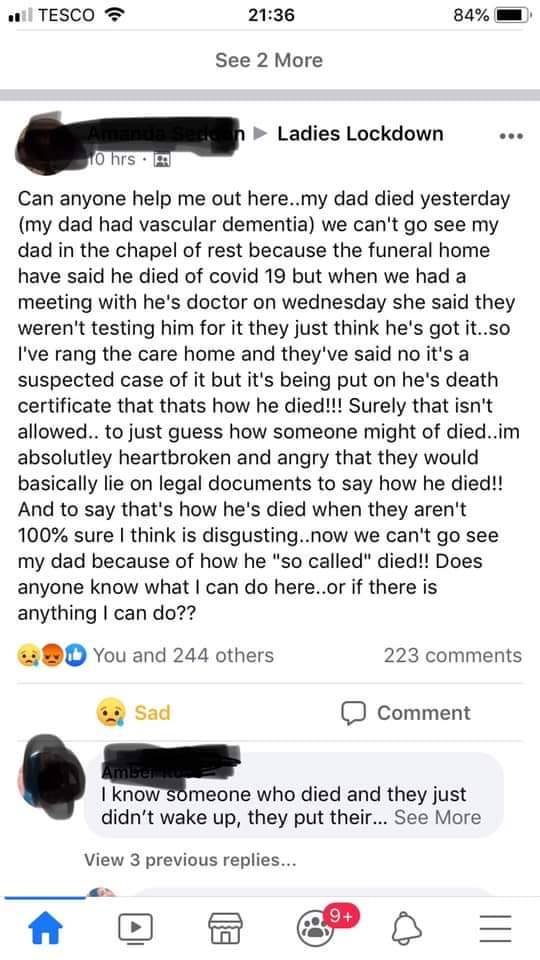 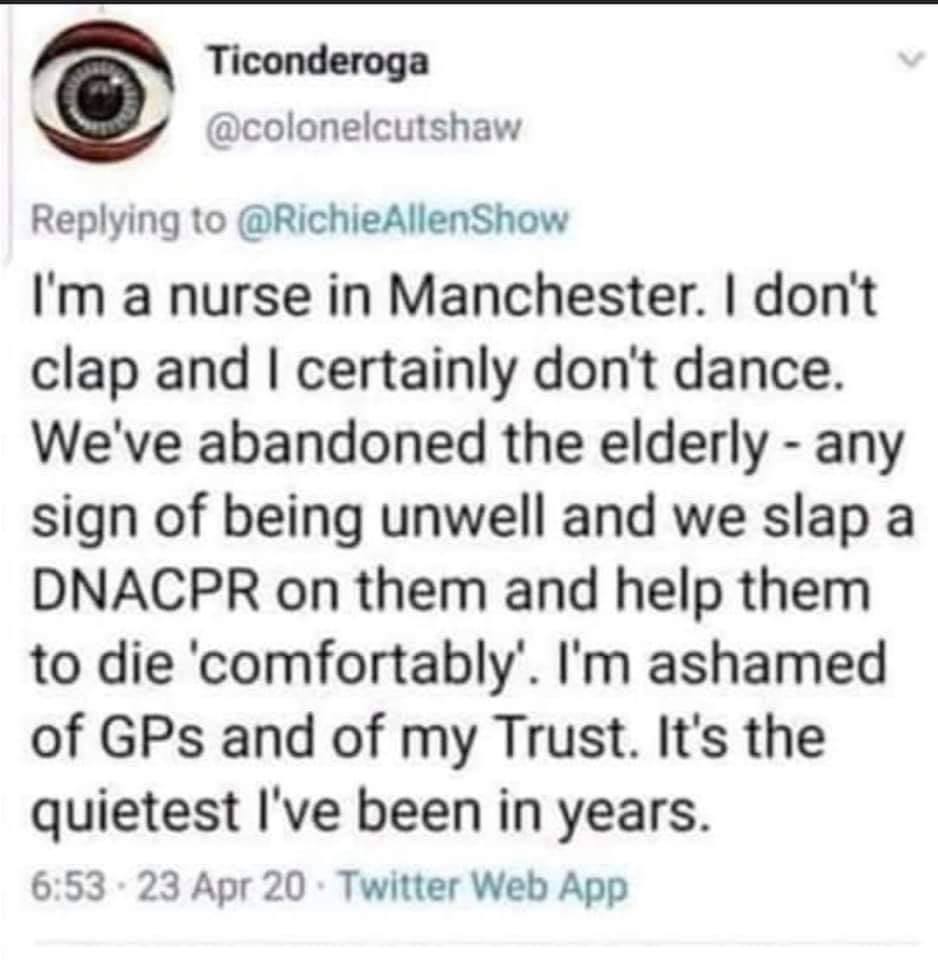 US Dept of Health 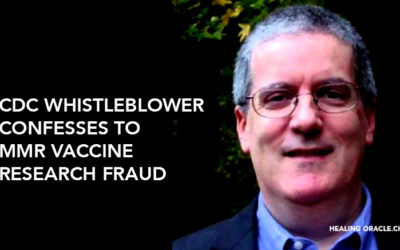 VACCINES CAUSED DERMATITIS AND TYPE 1 DIABETES IN OUR BABY BOY