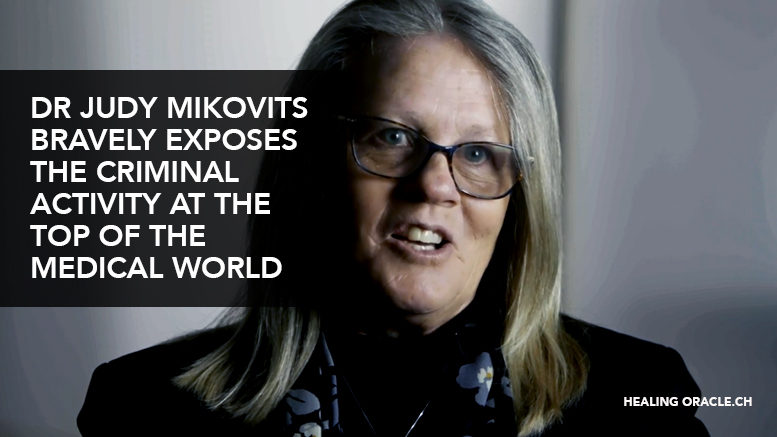 Posted By: The Healing Oracle Team 7th May 2020

Molecular biologist Dr. Judy A. Mikovits was thrown in prison nine years ago after discovering evidence that deadly retroviruses are transmitted through vaccines to humans

With her gagging order now over, she has bravely once again stepped forward to expose the deep corruption at the very top of the medical world of research.

Her experiences and her words are chilling. Her only hope is that we the people will become aware enough to spread the message, we will look beyond the baffling headlines that keep us locked in, locked down and under house arrest.

We can only hope that its not too late and that these grand crimes against humanity will not continue to fall on deaf ears. The truth will rise to the surface and the more people that are aware of this the better.

Please watch Dr Judy A Mikovits’s latest interview before it gets removed. This is an interview from the up and coming documentary “Plandemic The Movie” and the interview is called What you are not being told about Dr. Fauci – Dr. Judy Mikovits:

The interview has been removed from most sharing channels. but you can see it here on Bit Chute

From the Tips to Fix YouTube channels page itself, it describes the current tragedy we face as: “People are being arrested for surfing in the ocean and meditating in nature. Nations are collapsing. Hungry citizens are rioting for food. The media has generated so much confusion and fear that people are begging for salvation in a syringe.

Billionaire patent owners are pushing for globally mandated vaccines. Anyone who refuses to be injected with experimental poisons will be prohibited from travel, education and work. In the early 1900s, America’s first Billionaire, John D. Rockefeller bought a German pharmaceutical company that would later assist Hitler to implement his eugenics-based vision by manufacturing chemicals and poisons for war. Rockefeller wanted to eliminate the competitors of Western medicine, so he submitted a report to Congress declaring that there were too many doctors and medical schools in America, and that all natural healing modalities were unscientific quackery.

Rockefeller called for the standardization of medical education, whereby only his organization be allowed to grant medical school licenses in the US.

And so began the practice of immune suppressive, synthetic and toxic drugs. Once people had become dependent on this new system and the addictive drugs it provided, the system switched to a paid program, creating lifelong customers for the Rockefellers.

Currently, medical error is the third leading cause of death in the US. Rockefeller’s secret weapon to success was the strategy known as, “problem-reaction-solution.” Create a problem, escalate fear, then offer a pre-planned solution. Sound familiar? Now-days to 2020… They named it COVID19. Our leaders of world health predicted millions would die. The National Guard was deployed. Makeshift hospitals were erected to care for a massive overflow of patients. Mass graves were dug. Terrifying news reports had people everywhere seeking shelter to avoid connect. The plan is unfolding with precision. But the masters of the Pandemic underestimated one thing… the people. Medical professionals and every-day citizens are sharing critical information online. The overlords of big tech have ordered all dissenting voices to be silenced and banned, but they are too late. The slumbering masses are awake and aware that something is not right. Quarantine has provided the missing element: time. Suddenly, our overworked citizenry has ample time to research and investigate for themselves. Once you see, you can’t unsee. The window of opportunity is open like never before. For the first time in human history, we have the world’s attention. Plandemic will expose the scientific and political elite who run the scam that is our global health system, while laying out a new plan; a plan that allows all of humanity to reconnect with healing forces of nature. 2020 is the code for perfect vision. It is also the year that will go down in history as the moment we finally opened our eyes. This is mirrored from the original source of: Movie website: https://plandemicmovie.com

As we reported early last year, here on Healing Oracle, Molecular biologist Dr. Judy A. Mikovits was thrown in prison after discovering evidence that deadly retroviruses are transmitted through vaccines given to humans

In a disturbing true story first published by Natural News, Dr. Mikovits found evidence “that deadly retroviruses have been transmitted to 25 million Americans through vaccines.”

Dr. Mikovits worked with human retroviruses and focused on immunotherapy research and HIV. In 2009, she was doing research on neurological diseases, including autism, when she discovered many of her study subjects were suffering from serious medical issues. These issues included cancer, motor-neuron disorders and chronic fatigue Syndrome (CFS).

“It looked like a virus, it smelled like a virus, a retrovirus, because those are the types of viruses that disrupt the immune system. And several other investigators back in the 90s had actually isolated retroviruses from these people but the government called them ‘contaminants,’ that they weren’t real and that they didn’t have anything to do with the disease. Well, we isolated a new family of viruses that were called xenotropic murine leukemia virus-related virus. So these viruses were murine leukemia viruses, mouse viruses…

So spin forward two years, our paper published in one of the best scientific journals in the world in Science, October 8th, 2009. Usually that makes one’s career, in my case it ended my life as a scientist as I knew it.”

Dr. Mikovits’ paper, in and of itself, did not immediately bring the wrath of the powerful pharmaceutical industry. However, when a paper published 2 years later made the connection between this new virus and vaccines, then Mikovits’ research findings became too dangerous for the Deep State. Here is how Mikovits explains it in the video:

So in 2011, another AIDS researcher in a journal called Frontiers in Microbiology wrote a paper that really cost me a lot; I didn’t know that he was going to write this paper, but it basically said the most likely way that these murine leukemia virus-related viruses, these types of viruses, entered humans, was through vaccines.

So when did we start vaccines? 1953, 1934, right in the 30s with the polio, and what we were doing to attenuate, to make the virus less pathogenic, less toxic, is we were passing them through mouse brains, so we were passing them through the brains of mice, and every scientist who works with these viruses, and worked at the National Cancer Institute recognized the possibility that if you put human tissue and mouse tissue together, the possibility is that you’re going to pick up a virus that is silent in the mouse, that is it doesn’t hurt the mouse, but it kills the human, or causes serious disease in the human.

It was not long after the implications from the paper became clear and the Deep State saw the threat that was being posed to the vaccine industry that their powerful mechanisms of cover-up, obfuscation, and deception were activated:

She was arrested without a warrant and held in jail for 5 days without the opportunity for bail as a fugitive from justice, and was given a 4-year gagging order. Her career was destroyed. Her story is documented in the book Plague: One Scientist’s intrepid Search For the Truth about Human Retroviruses and Chronic Fatigue Syndrome, Autism, and Other Diseases.

Ironically, the FDA has now approved a testing protocol to detect retroviruses in the U.S. blood supply which is worth millions of dollars, and based in large part on Dr. Mikovits’ research, but it is being managed by Big Pharma. So while this distinguished scientist is now bankrupt and without employment, others are allegedly capitalizing on her research to earn millions of dollars to clean up the U.S. blood supply.

Vaccine Impact said: The author of the book Plague: One Scientist’s Intrepid Search for the Truth about Human Retroviruses and Chronic Fatigue Syndrome (ME/CFS), Autism, and Other Diseases, co-written by Kent Heckenlively, JD.

Dr. Mikovits’ bio is quite impressive, and would rival any of the talking head “experts” currently being featured in the corporate-sponsored media.

In only five years she developed the first neuroimmune institute from a concept to a reality and is primarily responsible for demonstrating the relationship between immune based inflammation and these diseases.

She has published over 50 scientific papers.

Dr. Mikovits spoke the truth about the fraudulent use of government research money, the marketing of inaccurate retrovirus tests, Medicare fraud, the contaminated blood supply, and the harm that is associated with vaccines and their schedule of administration.

Her research showed how retroviruses are linked to the plague of modern illnesses that are bankrupting the U.S. healthcare system.

Her story is documented in the book Plague: ​One Scientist’s intrepid Search For the Truth about Human Retroviruses and Chronic Fatigue Syndrome, Autism, and Other Diseases