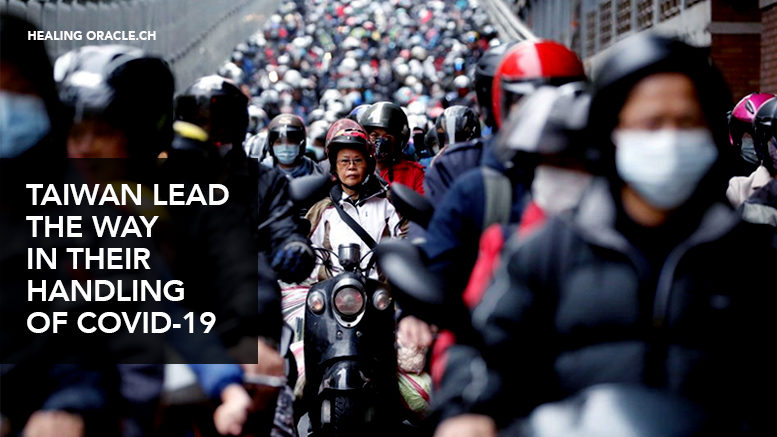 The word “Quarantine” used to mean that you kept the sick person isolated, not the healthy.

As most countries have reacted more or less the same to the Gates Foundations World Health Organisation and their “plandemic”, there is a lot to learn from how other countries that have bucked the trend and been more pragmatic about the first phase of the coronavirus test.

With different ties to the WHO and with their own version of the CDC Taiwan is a most interesting case. China’s direct neighbor have handled the coronavirus in a way that is enviably well managed, maintained and well, generally pretty sensible.

They also have no 5G networks as yet. So is this another reason they may have far less cases of illnesses that could resemble coronavirus, or have reported any kind of flu, or related condition as CoVID-19.

Johns Hopkins University had predicted that Taiwan would have the second most COVID-19 cases in the world, due to its close proximity to Mainland China.

But, in spite of being only 80 miles from the coast of China with over 400,000 of its 24 million citizens working in China, as of mid-April, the country only had 429 (as of 26th April 2020) cases of COVID-19, and only 6 deaths. And the vast majority of their 400 reported cases apparently came into the country from abroad.

All of this has happened without shutting down the country without lock downs, and with almost all of its businesses continuing to operate. Is Taiwan doing something else the rest of the world is largely missing?

The WHO The first thing to note is that while President Trump is now looking seriously at pulling out of the World Health Organization, Taiwan was never part of it. They were not allowed to join due to the WHO’s pro-China stance.

According to the Taipei Times, Taiwan’s CDC tried to warn China and WHO on December 31, 2019 about possible human-to-human transmission of the new coronavirus, while China was still denying that such transmission was possible.

That same day, Taiwan started policies to monitor travel from China to reduce the chance of having the coronavirus come into their country. They were one of the first countries to restrict travel from China at their borders.

Taiwan had bad experiences from the 2003 SARS (another coronavirus) outbreak in China, and as a result their hospitals were well supplied with equipment to handle any outbreaks. This SARS situation had reportedly taught them to have a healthy distrust in China and the World Health Organization to accurately report facts, and to have their own plan in place for future outbreaks.

It may well also answer the reason as to the low reported rates as they are not incentivising the medical profession to report false cases of CoVID-19 to boost the numbers.

Unlike the U.S. and many other countries, Taiwan did not quarantine the entire nation. They focused on quarantining travelers coming in from abroad in their own homes, while the rest of the nation went about their business, with some restrictions in place such as wearing face masks, and practicing social distancing.

It is hard to argue with their reported results so far, with so few actual cases and very few deaths. They kept the country open, and did not destroy their economy.

Protests in the streets, oil trading at negative numbers, rapidly spiraling unemployment, locked-down international travel and trade: I think we can all agree that by any barometer, including these, the world has failed the Wuhan flu test.

Why the world’s answer to the China flu has been so disastrously wrong, ill-thought out and ignorant to reality can be left to future post-mortems. But after spending literally trillions on public health over the decades to prevent just such an occurrence, it’s clear by now that the world’s investment in public health professionals was wasted.

We can debate whether the cost was worth it, but there is no denying that the cost has been beyond anyone’s imagining.

Some may argue that in such a crisis, experts faced a no-win situation where they had to either trade lives for the economy or the economy for lives.

To that I give a one-word answer: Taiwan.

Taiwan is the other “China”. It’s a small island off the southern coast of China, called the Republic of China (ROC). It was created as a bastion of “free” China as the Communist Party took over mainland China (PRC).

The island may be small, but the country is a regional and worldwide powerhouse. It’s the 21st largest economy in the world (19th if counting by PPP), despite having a population of just 24 million. It ranks 11th in GDP per capita, comparable to Denmark and Sweden.

It’s also an important partner with Communist China as one of the leading investors, trading partners and bankers for the PRC. Consequently, Taiwan hosts quite a bit of contact with the PRC.

That’s why the results from Taiwan in fighting China’s Wuhan flu—as they call it in Taiwan—is so extraordinary.

Equally important is that while the Taiwanese economy has been damaged by the global shutdown, their domestic economy and society has remained open.

We report these results as a comparison to what other actions have been taken in other countries, that have had far more disastrous results. We are not necessarily endorsing everything that Taiwan has done, just reporting the facts about their response and their results so far.

This pandemic has provided us with a clinical trial in the healing power of freedom. We can now compare two control groups in the form of two Chinese societies — one free and democratic, the other under the grip of a brutal totalitarian dictatorship.

The tale of two cities

New York has had 11,000 reported Covid deaths. Tokyo is the worlds largest and densest cities has had 93 cases

Tokyo was never locked down, both have had the virus the same amount of time. New York has 1,500 different 5G Networks. Tokyo also has 21 5G Networks.

What is going on here? If this virus were so contagious and deadly, would we not be seeing more deaths in areas of greater population.

Mexico has a vast population at nearly one hundred and twenty four million people, whilst there has been far more freedom of movement in Mexico and far less state control.

It also has zero 5G networks…. cases of the coronavirus in Mexico are only 11,633. Again, this is a tiny proportion of what is happening in New York for example.

Questions over testing will not go away

According to this article in the New York Post:

Feds classifying all coronavirus patient deaths as ‘COVID-19’ deaths, regardless of cause

The federal government is classifying the deaths of patients infected with the coronavirus as COVID-19 deaths, regardless of any underlying health issues that could have contributed to the loss of someone’s life.

Dr. Deborah Birx, the response coordinator for the White House coronavirus task force, said the federal government is continuing to count the suspected COVID-19 deaths, despite other nations doing the opposite.

According to Dr. Scott W. Atlas in an article in The Hill, it is of course time to end the lock downs:

“Americans are now desperate for sensible policymakers who have the courage to ignore the panic and rely on facts. Leaders must examine accumulated data to see what has actually happened, rather than keep emphasizing hypothetical projections; combine that empirical evidence with fundamental principles of biology established for decades; and then thoughtfully restore the country to function.”

We do the research, you decide