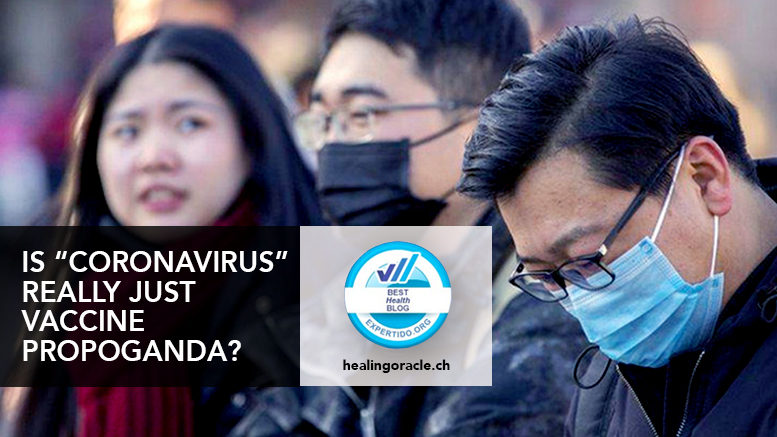 Is Coronavirus a new vaccine program?

With talk of mass quarantines and inflated numbers of sufferers and deaths from a new strain of Coronavirus “2019-nCoV,” emanating from China and Asia, we wonder what is really behind all this News hype.

Is this perhaps the start of a new vaccine program?

In todays world of social media, fake news, conspiracy theories, nationalism and border paranoia, it seems that there is much to gain from over inflating stories of sickness across the political divide. With talk of screenings at airports and of cover ups, this all feeds the media and builds on fear.

It’s the perfect storm for drug makers. Could Big Pharma, Merck, GSK, the CDC and their mass media partnerships be behind this news? There is much money to be made in fighting diseases and apparently stopping diseases before they have even begun with mass vaccination programs. It’s what the vaccine industry is built on. Create fear in order to create a necessity. Then give everyone a disease in order to prevent it.

According to Prep for That, this is actually a mass cover-up and that 11 Million People have been quarantined over this ‘Mysterious Virus’ in Wuhan, China.

“The Wuhan Coronavirus is now appearing to be a massive outbreak beyond the first official reports. Chinese officials have reportedly quarantined at least 11 million people in Wuhan,” which is more or less the entire population of Wuhan.

For what and why we ask and is this even really happening?

“No traffic is being allowed to exit, or enter the city as of this hour. All plane and train travel is shut down. This is an unprecedented move that’s sure to send waves of shock and fear up the spines of people all over the world. Chinese state media made the announcement via Twitter” they say.

What they’re doing is a very, very strong measure and with full commitment,” Tedros Adhanom Ghebreyesus, the director-general of the World Health Organization said in a WHO press conference on Wednesday afternoon.

The most common symptoms of the new coronavirus are fever, cough, and difficulty breathing. Lab tests ruled out MERS and SARS, as well as several other possible illnesses.

Spreading fear: Video of roads blocked in and out of the city of Wuhan appear apocalyptic at this hour. Additionally, video of quarantine tents are now surfacing.

But we wonder, could this actually be a mass vaccination regime across a concentrated area? Could this lead to further outbreaks as shedding from any potential vaccinations can lead to the disease spreading further? As we have seen with the MMR vaccine.

While Wuhan’s officials have reported only 444 infected persons, it now appears that such numbers are largely deflated according to Prep for That. It’s unclear whether or not Chinese officials are participating in an active cover up, or if the outbreak has indeed swelled beyond control.

But rest assured bug business in the USA is onto it!

Sen. Tom Cotton (R-AR) is requesting that President Trump ban travel from China, a move that if ordered, would certainly have extreme political ramifications.

“I write to you today about the continued spread of the Wuhan coronavirus, which has now arrived on American soil,” Cotton wrote in the Wednesday letter, which came after the first U.S. case of coronavirus was confirmed in Washington state earlier this week.

“Once again, a deadly virus is emanating from the People’s Republic of China. The Wuhan coronavirus has infected hundreds of people in China, killing at least seventeen individuals so far. The disease has now spread to Taiwan, Japan, Thailand, and South Korea. At least one case has been confirmed in the United States. I’m confident that the United States Government is undertaking all possible measures to contain the spread of the disease, but I’m deeply concerned that waging an efficient and successful campaign against this virus depends on the trustworthiness and transparency of the Chinese Communist Party (CCP), an organization with a horrendous history in these matters.”

There’s certainly nothing like a major international medical scandal with mass media coverage mixed with some good old political intrigue, xenophobia and fear mongering, to set the tone for a new Vaccine program.

Or is this a genuine news story and the people of China have a bigger epidemic on their hands? Our guess is that you will never know, but expect to be forced to have the vaccine pretty soon.

Either way according to USA Today and Yahoo News drug makers are hustling to make a vaccine to counter the rapidly-spreading respiratory virus that has sickened at least 830 in China and two people in the United States.

The National Institutes of Health has partnered with a Boston-area company, Moderna, on a vaccine targeting the novel coronavirus. A Pennsylvania biotechnology company, Inovio, also secured a $9 million grant from Norway-based Coalition for Epidemic Preparedness Innovations to develop a vaccine. The company already is developing a vaccine for Middle East respiratory syndrome, or MERS, another type of coronavirus.

Officials with the National Institute of Allergy and Infectious Diseases say they can quickly develop a vaccine because Chinese scientists rapidly sequenced the virus’s genome. So thank the heavens for Medical Science.

“The agency has the funding and technology,” said Anthony Fauci, director of the National Institute of Allergy and Infectious Diseases. “Barring any bureaucratic or regulatory holdups, which I don’t think will happen (of course), we can almost certainly get into phase one in three months.”

‘Everything now is experimental.’ Here’s how doctors are treating coronavirus

Of course USA Today where quick to use the conspiracy theory card and dismiss any theory of wrong doing, saying:

Bogus coronavirus conspiracy theory about patents, vaccine spreads on social media Following the outbreak of a respiratory disease caused by a new coronavirus in Wuhan, China in December and the announcement of the first American case Jan. 21, several groups and individuals are circulating false rumors on Facebook about the mystery pathogen.

Numerous posts claim the virus has been patented — and some even suggest, incorrectly, that the virus was made in a lab and a vaccine already exists.

Yet we have also seen that grants have been rushed through and red tape cut with the race now on to create the vaccine. So either way Big Pharma is set to win big on this one.

But either way, Big Pharma and big business is set to gain. As all of this of course has an affect on the stock market with companies making money from the News and again according to USA Today:

The spread of China’s coronavirus is providing stock-market investors with another reason for near-term caution as major U.S. equity benchmarks trade near all-time highs, analysts said, offering a potential trigger for a near-term pullback.

So be sure to know that medical health is big business and while big business is involved, you can be sure there are many other masked agendas aside from any human death toll.