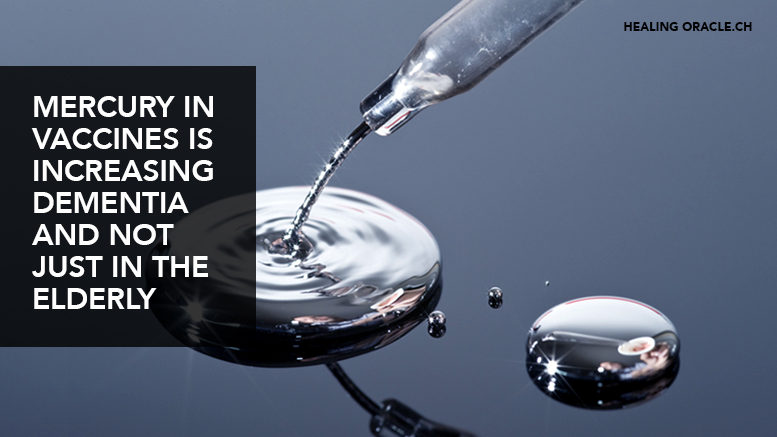 Dementia and other neurological brain diseases are striking people younger and younger, according to a 2015 study conducted by researchers from Bournemouth University in England and published in the journal Surgical Neurology International.

“The rate of increase in such a short time suggests a silent, or even a ‘hidden’ epidemic, in which environmental factors must play a major part, not just ageing,” lead researcher Colin Pritchard said.

“Modern living produces multi-interactional environmental pollution but the changes in human morbidity, including neurological disease is remarkable and points to environmental influences.”

Death rates have more than doubled

The researchers compared the rates of neurological brain diseases in 21 Western countries from 1989 to 2010. They found that as of 2010, the average rate of onset for dementia was 10 years earlier than it was in 1989. In addition, deaths from neurological disease had increased significantly in people aged 55 to 74 and had nearly doubled in people aged 75 and older.

These changes were seen in all 21 countries, but the United States fared the worst by far. In the United States, neurological deaths in men older than 74 tripled from 1989 to 2010, and they increased nearly fivefold in women of the same age. More elderly U.S. women are now dying from brain diseases than from cancer for the first time in recorded history.

The researchers’ analysis showed that the findings could not simply be explained by improved treatment of other diseases.

“Crucially it is not just because people are living longer to get diseases they previously would not have lived long enough to develop, but older people are developing neurological disease more than ever before,” Pritchard said.

Instead, a large part of the cause must be environmental changes that have taken place over the past two decades.

“The environmental changes in the last 20 years have seen increases in the human environment of petro-chemicals – air transport- quadrupling of motor vehicles, insecticides and rises in background electro-magnetic-field, and so on.

“These results will not be welcome news as there are many with short-term vested interests that will want to ignore them,” he said.

Could mercury exposure from vaccines play a role in the rising rates of early onset dementia? Until 2001, mercury-containing thimerosal was used as a preservative in many childhood vaccines. Even today, the substance is still used in adult vaccines as well as in the flu shots that are routinely forced upon us every winter.

In a study published in the Journal of Alzheimer’s Disease in 2010, researchers reviewed 100 prior experimental and clinical studies looking at the effects of mercury on cells, animals and humans. They found that long-term mercury exposure produced many of the same changes seen in Alzheimer’s disease, including confusion and impairments to memory and cognitive function.

“Mercury is clearly contributing to neurological problems, whose rate is increasing in parallel with rising levels of mercury,” researcher Richard Deth said. “It seems that the two are tied together.”

and anyone with a mercury filling or a root canal are effectively walking around with a battery in their mouth, leaking this toxic metal into their blood stream 24 hours a day.

Many fillings contain as much as 54% mercury and they can remain there for decades. Many dentists and the World Health Organization have denied claims that point to the dangers of these fillings.

Dr. Hal Huggins who was the first to reveal the truth about mercury/amalgam fillings explained that even the slightest amount of mercury in the human body can be life-threatening. Much to the outrage of many of his colleagues who have been taught otherwise.

To explain his theory, he gave the example of an experiment that involved egg cells. When the egg cells came in contact with mercury, the cells failed to connect with the uterus, although the fertilization was effective.

Huggins claimed that the mercury in mercury fillings emit gases 24 hours a day, which can be the cause of many life-threatening diseases and can also be attributed to the steady rise in cases of dementia.

Other research, also in 2015 showed that Aluminum adjuvants in vaccines are also a problem, as it has also been linked to several human health ailments such as; autism, Parkinson’s disease, Alzheimer’s disease and more (as Dr. Shaw notes).

Dr. Chris Shaw, a Neuroscientist and professor at the University of British Columbia explained the dangers of putting aluminum into vaccines as an adjuvant. Keep that word in mind: adjuvant.

As he pointed out, a common argument from the “pro-vaccine” side when it comes to vaccines that contain aluminum is that aluminum is present everywhere, that we ingest it more from our food (and other things) than we do from vaccines.

This argument is completely invalid, because when it is in the form of an adjuvant within a vaccine, as Dr. Shaw explains, the aluminum stays in your body. That’s exactly what it’s designed to do, that’s the purpose of an adjuvant.

On the other hand, when you accumulate aluminum in your body from food, industrial practices, or any other source, our bodies usually do a good job flushing it out. Again, when it’s in a vaccine the body does not do this, it stays in the body and this is why vaccines that contain aluminum (and other harmful toxins) should be a cause for concern.

Ways to clear the body of heavy metals

The good news is that there are actually a number of ways of clearing these toxic heavy metals and so here are three of the best:

The health of the modern western world would be greatly improved if we were to admister EDTA Chelation to anyone diagnosed with dementia. It would greatly improve their situation and is not a hard to come by, difficult solution, but is actually already available in all modern hospitals, but is simply not as common a practice as it should be.

EDTA (EthyleneDiamineTetraAcetic Acid) is a synthetic amino acid related to vinegar. Neither is it new, as it was developed by the Germans in 1931 to reverse heavy-metal poisoning from the ingestion of lead, mercury, aluminum, cadmium, and more.

At our clinics we use EDTA Chelation to clear a range of TOXIC heavy metals that have built up in the arteries and organs of our patients. It is a very successful treatment method that is non invasive (apart from a little pinch) is pain free and when done correctly has an instant recovery.

Diatomaceous earth (DE) is a naturally occurring rock made from the skeletons of fossilized diatoms, a type of hard-shelled algae. When ground into a fine powder, diatomaceous earth works mechanically to destroy a wide range of pests, insects, parasites and pathogens as well as helping to detoxify from mercury, cadmium, aluminum, lead and other heavy metals.

It can also remove poisons from chemtrails and radiation and may alleviate the effects of GMOs. DE possesses antibacterial, anti-fungal and antiviral properties.

Add diatomaceous earth to your diet and in addition to detoxing and destroying pathogens, diatomaceous earth helps to lower blood pressure and contributes to the production of collagen to improve skin tone, strengthening the tendons and joints.

Selenium is also very helpful when it comes to clearing heavy metals and can be taken as a supplement to help. Given the complexities of human biology, there are a number of reasons why high levels of selenium and chromium are effective at overcoming and preventing heavy metal toxicity as well as:

We hope the information in this article helps. It is intended for educational purposes only.

We do the research, you decide.