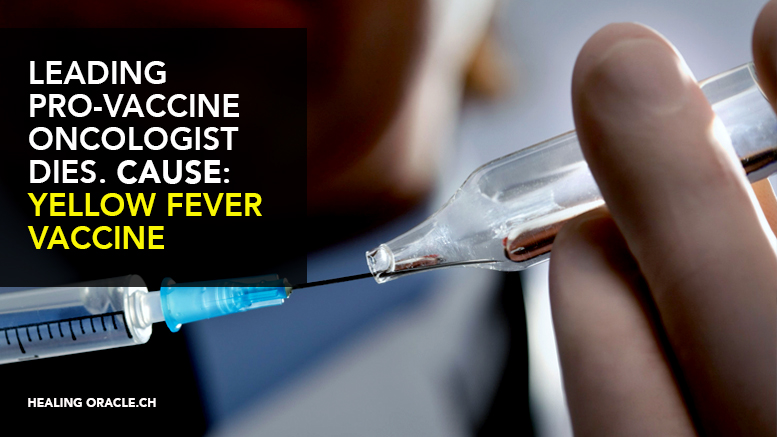 London’s Royal Marsden NHS Foundation Trust, where Gore worked for more than 30 years, expressed its “deep sadness” following the announcement of his death.

He would often report the parents of children who were unvaccinated to child services and was a fully fledged pro vaccination advocate. His death serves as a warning to everyone, showing that no one is fully immune to the damage vaccines cause.

When you look at the dangerous ingredients within every vaccine it is no wonder that it will effect anyone with a low immune system such as the elderly, the young, or anyone who is over worked, stressed and low on nutrients due to fast processed foods.

Professor Mel Greaves from the Institute of Cancer Research, described Gore as “a force of nature, very energetic, clear-thinking and compassionate.”

Dr Gore’s death casts light on the heightened risk associated with the yellow fever vaccine and the over-60 demographic. As much like all vaccinations it is the weaker immune response that leads to serious damage. In the reports it was said that it was the over 60s who are at a greater risk, but over work, stress and lack of nutrition due to a poor diet will lead to an impaired immune system.

Contrary to what the propaganda-spreading World Health Organization (WHO) purports, modern day vaccines are responsible for more deaths than the diseases they are intended to create immunity against.

Typical side effects of the vaccine include headaches, muscle pain, mild fever and soreness at the injection site, according to the NHS. However, the vaccinations can also cause more severe side effects, including allergic reactions and problems affecting the brain or organs.

The WHO reported that all cases of viscerotropic disease — a dangerous side effect of yellow fever vaccinations where an illness similar to wild-type yellow fever proliferates in multiple organs — have occurred in primary vaccines, starting two to five days after vaccination.

The Centers for Disease Control and Prevention — the US government’s health protection agency — warns that viscerotropic disease can lead to multiple organ dysfunction syndrome or multi-organ failure and death in close to 60% of cases.

Jonathan Ball, professor of molecular virology at the University of Nottingham, added:

“serious side effects have a greater risk of developing in the over-60s and in very young infants. Notably, he also pointed to reports which suggest that the risk of developing “vaccine-associated viscerotropic disease” also increase in the under-60 age group. But in reality vaccines effect anyone with an impaired immune system and that includes stress and bad diet.

Dr Martin Gore was an oncologist for more than 35 years, and first joined the Royal Marsden in 1978 as a senior house officer. He was appointed medical director of the trust in 2006, and held the role for 10 years until he stepped down in January 2016.

His other notable roles include acting as the chairman of the Gene Therapy Advisory Committee at the Department of Health between 2006 and 2012, being a senior investigator at the National Institute for Health Research between 2008 and 2011, and being appointed commissioner of the Commission on Human Medicines at the Medicines and Healthcare Products Regulatory Agency.