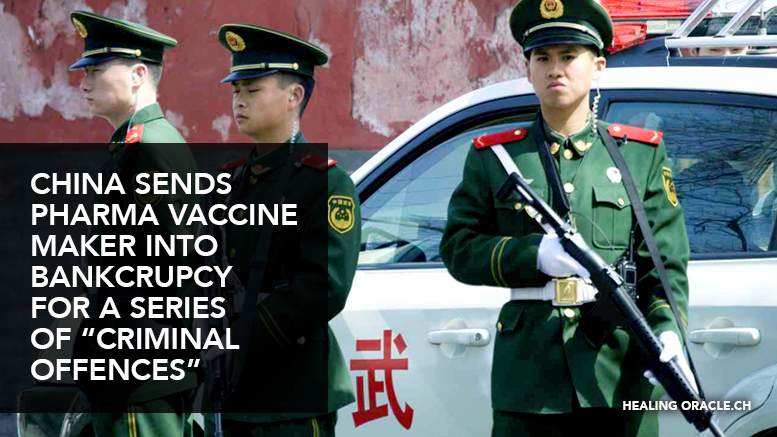 Changchun Changsheng Life Sciences Limited, a Chinese company involved in a defective vaccine case, has just been handed a bankruptcy ruling by a court in northeast China, according to an announcement released Friday by the Shenzhen Stock Exchange.

The Intermediate People’s Court of Changchun, capital of Jilin Province, ruled that Changchun Changsheng is insolvent and unable to pay its debts when they are due. Meanwhile, there is no possibility of reorganization, the announcement said.

Last year, authorities revoked their pharmaceutical production license and imposed a fine of more than 9.1 billion yuan (about 1.3 billion U.S. dollars) on Changchun Changsheng for illegal production of vaccines.

The question is, do we think that US officials would take such a stance against a big corporate when many courts in states across USA are actually not even allowed to take a case against any vaccine company for injury?

This follows reports last year of Chinese Police arresting 15 of their Executives In the Vaccine investigations that led to this action.

On July 25, 2018, in the northeastern city of Changchun, police authorities arrested pharmaceutical company’s chairwoman Gao Junfang and 14 others on “suspicion of criminal offenses.”

News that pharmaceutical manufacturer Changchun Changsheng Biotechnology had fabricated records and was ordered to cease production of rabies vaccines was reported by PrecisionVaccinations.com on July 22nd.

The criminal investigation has shattered consumer trust in regulators. In a sign of the high-level unease, China President Xi Jinping said July 23rd, ‘the vaccine company’s actions were vile in nature and shocking“, according to state media.