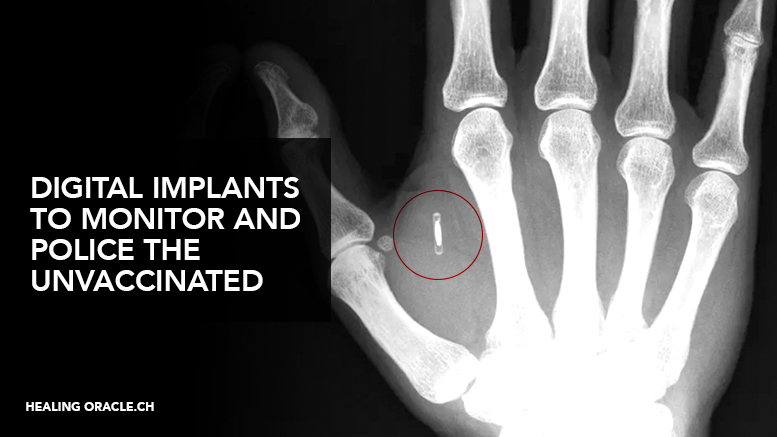 Would it not be easier to see if someone was vaccinated, or not, simply by looking on their wrist, or by monitoring their digital ID via 5G cell towers and the frequency they emit? That’s what Bill Gates and Big Tech wants and its on its way.

Would you agree to have a microchip implanted into your body? That’s the question that Microsoft and a group of pharmaceutical companies are asking.

As we enter the next phase of mass medical policing, Microsoft is spearheading an initiative called “ID2020,” a program aimed at giving every human on the planet a digital ID, like a fingerprint, in order to keep everyone connected.

Alerts can then be easily sent when an unvaccinated person enters a certain area, country, or simply walks down any street in any city.

Making it easy to ban them from public areas, lock them up, quarantine them, remove their freedom and force on the spot vaccinations. This is the scary future, but its already happening as the unvaccinated will become further marginalised and condemned by the media, police, army and legal institutions of the New World order.

The ID2020 Alliance is an initiative helmed by Bill Gate Keeper the worlds most powerful medical figure and one of Big Techs leading men. ID 2020 is aimed at “getting Digital IDs right.” According to the official ID2020 site, current methods of official identification are “archaic” and not accessible by everyone. As the Alliance claims, the current methods of digital identification are easy to spoof, and proper online ID certification hasn’t become a reality just yet.

As companies are only now defining what a proper, official online ID looks like, ID2020 seeks to help define what a “good” digital ID is. Gates and the Board of the Alliance have a “Certification Mark” that they award to companies and technologies that meet the criteria of being “good” digital ID tech.

We were warned about the Mark of the Beast in the bible:

“And he causeth all, both small and great, rich and poor, free and bond, to receive a mark in their right hand, or in their foreheads: And that no man might buy or sell, save he that had the mark, or the name of the beast, or the number of his name. Here is wisdom. Let him that hath understanding count the number of the beast: for it is the number of a man; and his number is Six hundred threescore and six.” Revelation 13:16-18 (KJV)

The idea behind some of ID2020’s more controversial technologies is a digital ID that can be implanted into someone in chip form.

Currently, this is claimed to help homeless people, or people in developing countries by giving them access to blockchain-powered identification. Starting on the weak and vulnerable.

In theory, the practice would have people receiving free vaccinations through the Bill Gates foundation if they have an ID chip implant. In turn, these implants would carry encrypted, blockchain-backed data that allow for easy access to services you can’t normally get without an ID.

It could also help social workers and researchers keep up with who is up-to-date on their vaccinations.

On the website they claim that Proving your Identity is a universal human right.

“The ability to prove who you are is a fundamental and universal human right. Because we live in a digital era, we need a trusted and reliable way to do that both in the physical world and online.”

Why is this presented as safe and important? It’s nothing short of Crowd and mind control, yet as with all propaganda it is presented as if this is a human right and is good for society.

Wherease it is merely Orwelian police state working in secret to shepherd the people into coercion.

Please see this related article on Big Tech and the new world order.

There is little in terms of opposition to these fast moving developments that claim to be for the greater good. As we have already reported, Bill Gates is now the most powerful man at the World Health Organisation.

Over the past decade, the world’s richest man has become the World Health Organization’s second biggest donor, second only to the United States and just above the United Kingdom. This largesse gives him outsized influence over its agenda, one that could grow as the U.S. and the U.K. threaten to cut funding if the agency doesn’t make a better investment case.

The result, say his critics, is that Gates’ priorities have become the WHO’s. Rather than focusing on strengthening health care in poor countries — that would help, in their view, to contain future outbreaks like the Ebola epidemic — the agency spends a disproportionate amount of its resources on projects with the measurable outcomes Gates prefers, such as the effort to eradicate polio.

Concerns about the software billionaire’s sway — roughly a quarter of WHO’s budget goes toward polio eradication — has led to an effort to rein him in. But he remains a force to be reckoned with, as WHO prepares to elect one of three finalists to lead the organization.

Phasing out cash in order to replace it with digital cash will also mean that we have less choice in this matter, as in Sweden as we reported last year

The financial authorities, who once embraced the trend, are asking banks to keep peddling notes and coins until the government can figure out what going cash-free means for young and old consumers. The central bank, which predicts cash may fade from Sweden, is testing a digital currency — an e-krona — to keep firm control of the money supply. Lawmakers are exploring the fate of online payments and bank accounts if an electrical grid fails or servers are thwarted by power failures, hackers or even war.

Connect this to the building of the 5G infrastructure, which  not to mention the health risks of 5G, will connect everyone and mean even our DNA can be monitored.

Millimeter waves, massive MIMO, full duplex, beamforming, and small cells are just a few of the technologies that could enable ultrafast 5G networks. Like it or not, we’re rapidly moving into the world of 5G, or 5th generation cellular telecommunications. As our reliance on technology and passively absorbing information continues unabated. 5G comes with numerous health risks, more radiation and of course more cancer.

From the Soldiers mouth

Please watch this video of a United States soldier claiming she has trained with California police to set-up checkpoints and force vaccinations on the public. Those who refuse will be boarded on a bus and taken to a concentration camp. She includes a photo of an RFID device she claims will be used to track people and materiel. She says the military and police will use electronic bracelets to track the vaccinated.