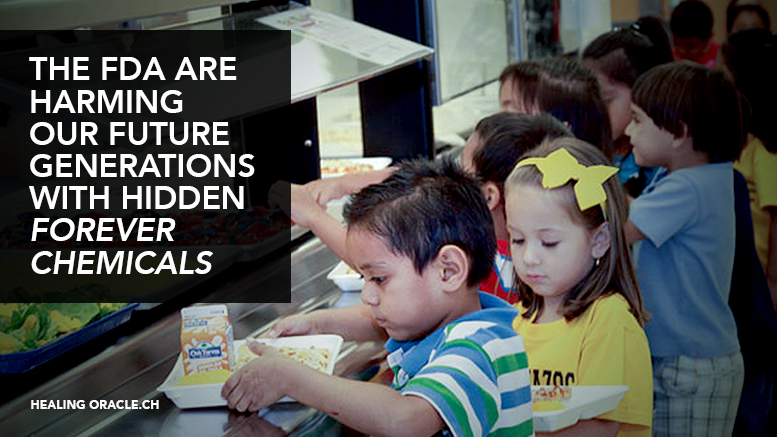 The Food and Drug Administration (FDA) has found that chemicals linked to cancer are showing up in milk, meat, produce and even store-made chocolate cakes sold in the U.S., according to a leaked study, that has not yet been made public. But how long did they know?

For had it not been leaked, it would have remained buried alongside all the other evidence of the harm their ‘approved products’ cause on the population.

The FDA are not exactly the ‘knights in shining armour’ impartial operation they claim to be. Whilst packaged food has long been seen as a poor option for health, with chemotherapy drugs found in potato chips for instance, but these latest leaked findings, show that not only is it the food processing that is harmful, alongside the sugar and lack of nutrition, but also the packaging itself. Not to mention the GMO wheat and Glyphosate soaked ingredients inside.

Aspects of the study, presented last week at a scientific conference in Helsinki found the class of chemicals, abbreviated as PFAS, present in a number of other food products. PFAS are often referred to as “forever chemicals” because of the time it takes them to break down.

The FDA said it plans to publicly release the findings after details of the study were leaked to The Hill and other U.S. media outlets by environmental groups.

“I’m not sure why they released it there and not in the U.S., but I’m just glad it’s out,” said Tom Neltner, chemicals policy director with the Environmental Defense Fund, one of the groups that released the information.

The FDA confirmed the contents of the leaked report.

The chemicals in question are used in a staggering number of products including food packaging. Some states have banned packaging that’s made with the chemicals, citing research that shows they can transfer to food items.

PFAS has been linked with kidney and thyroid cancer along with high cholesterol and other illnesses.

The FDA’s research showed that water contaminated with PFAS likely ends up in the food supply. Fourteen of 91 samples taken by the agency contained the chemicals, while almost half of all meat and seafood samples tested positive.

PFAS has been found in the water supply near military bases, airports that often use firefighting foam and factories that manufacture products with PFAS.

The study outlined examples of the contamination spreading to food.

Produce for sale at a farmer’s market 10 miles from a PFAS production plant was found to have the chemical, and testing from a dairy farm near an Air Force base in New Mexico found that water contamination from the base had reached the cows and the milk they produced.

“It would take approximately 1.5 years to eliminate PFOS from the cow after a 30-day exposure period,” the study noted, using an abbreviation for another form of PFAS.

The study said that even when food sources tested positive, they were “not likely to be a safety concern.”

But Neltner said that view is too narrow.

“They just assume all these are one-off isolated incidents, but there’s cumulative exposure here that has to be considered,” he said.

Neltner said he was concerned that the FDA study skewed toward environmental contamination rather than everyday food packaging. He said he was particularly bothered by the high levels of PFAS found in store-bought chocolate cake, which registered at more than 250 times the level the Environmental Protection Agency (EPA) recommends for water.

The FDA said it planned to launch a website this week that shows “comprehensive information about FDA’s work looking into PFAS and recent early, preliminary survey findings” that were shared at the conference. But the webpage text shared with The Hill did not feature the full results of the study.

Scott Faber, senior vice president for government affairs for the Environmental Working Group, which also released the study, said it was wrong for the FDA to hold back findings that contribute to a growing body of evidence tying PFAS exposure to food. Yet he clearly thinks, life is not worth living without chocolate cake. As the cake is likely to take your life, but hey, why would anyone wanna give it up right?:

“Clearly people are not going to stop eating chocolate cake with icing, but they have the right to know that high levels of PFAS are being found in everyday foods, and that’s why it’s so troubling that Americans had to go all the way to Helsinki to know what scientists have known for many years,” he said.

Legislation in both chambers includes measures that would require the EPA to set a drinking water standard for PFAS, set deadlines for cleaning up PFAS contamination caused by the federal government, allow the use of Superfund cleanup funds to deal with PFAS contamination, establish a ban on new PFAS chemicals and provide funding to clean up already-contaminated water.