Kentucky Gov. Matt Bevin (USA) has publicly stated that he made sure all his nine children were exposed to chickenpox and caught the disease instead of giving them a vaccine. It’s very rare for a public official to actually stand up and say what they really think. We commend his bravery and personal stance.

“They had it as children. They were miserable for a few days, and they all turned out fine,” Bevin said in an interview with WKCT, a Bowling Green radio station.

Bevin and his wife, Glenna, have nine children between the ages of 5 and 16, according to his campaign website.

As so used to be the opinion of chicken pox in the USA and still is in much of Europe where chicken pox is not considered deadly and mums organize Chicken Pox parties, so their children’s immune systems build resistance to the disease. 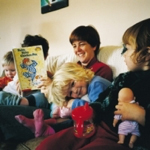 This from mothering.com in 2004: ““Whoopee!” When word got out that little George’s cousin Natalie had chickenpox, the playgroup phone tree lit up with the jubilant consensus: “Chickenpox party!” George was there, as was Natalie, our “Patient Zero.” Jonah, Timothy, Sam, and Luka came with parents in tow, hoping to bring home a lifelong party favor of double-stranded DNA herpesvirus.”

It was an informed, social gathering where parents could share information:

“Yes, it sounds cruel and unusual to subject one’s child to a biological sneak attack. But we weren’t going blindly into this affair like Tupperware-toting lemmings. We’d done our homework. On the kitchen table was a stack of clinical studies citing the pros, cons, dos, and don’ts of catching wild chickenpox in the company of friends.”

What happened to this type of open informed debate? Social media and the mainstream media has changed so much of what we now think, that we now get our opinions via the digital worlds we inhabit. Where kids are encouraged to go rogue and get vaccinated even if that’s against their parents consent

It’s funny how 10 years ago, Matt Bevins opinions would have been the norm. Chickenpox was never a big deal, until recently. See this exert from The Simpsons for an example:

Such is the drive for more and more vaccines, with another 247 vaccines in the pipeline, it’s as if we have no immune system, in fact many of us do not have a robust immune system, such is the systemic damage done to the human body, via toxins like Glyphosate in our food and medication it is set to change our DNA forever. So there is a perceived need for more drugs. To fight the other drugs. And so mainstream media now report this story as if governor Bevin is wrong.

But, if you look at research and statistics, vaccines kill more people than the diseases they are designed to prevent, by turning the bodies immune system against itself

The sheer number of vaccines that a baby gets by such a young age, way before the immune system can develop with shots like Tetanus during pregnancy, Vitamin K at birth and all the many many more to follow, has meant the rise of superbugs and more aggressive virulent strains of the original bacteria. Whilst cancer and autism are forever on the increase. Please also read this article that describes how MMR spreads measles

The largest superbug is known as MRSA (Methicillin-resistant Staphylococcus aureus) also known as the antibiotic resistant super-bug, due to cross-infection primarily from the routine administering of the Pneumococcal Conjugate Vaccine (PCV) Vaccine – in combination with post vaccination anti-biotic & anti-viral drug treatment, an accumulative assault which strips a child of his/her natural anti-biotic resistance whilst infecting them with a host of bacterial serotypes.

Please see this section on the many articles listing the dangers of vaccines.

The governor, Matt Bevin says he supports parents who choose to get their children vaccinated and also those who decline to do so. But he said the decision shouldn’t be up to the government.

“This is America,” he said. “The federal government should not be forcing this upon people. They just shouldn’t.”

If you feel the same way, then please Sign our petition against enforced medical intervention

Please see this section on the many articles listing the dangers of vaccines.