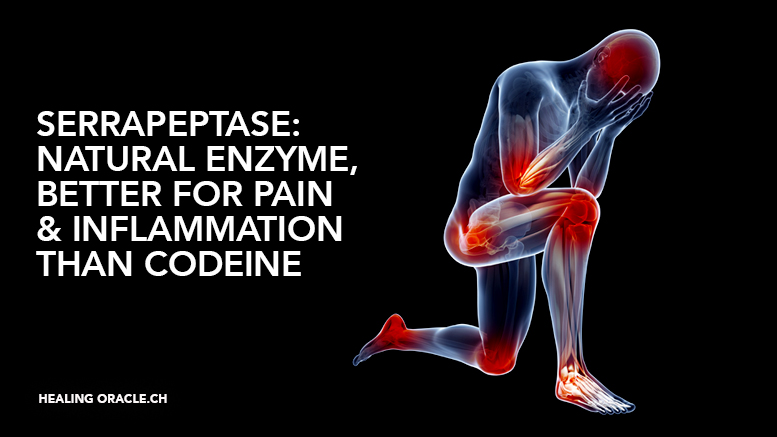 Serrapeptase is a naturally occurring enzyme that has been used for years in Japan and Europe for reducing inflammation and pain due to surgery, trauma, and other inflammatory conditions. It can also help break down mucous, which is the build up of toxins.

Serrapeptase — also known as serratiopeptidase — is a proteolytic enzyme, meaning it breaks down proteins into smaller components called amino acids. It’s produced by bacteria in the digestive tract of silkworms and allows the emerging moth to digest and dissolve its cocoon.

The use of proteolytic enzymes like trypsin, chymotrypsin, and bromelain came into practice in the United States during the 1950s after it was observed that they had anti-inflammatory effects.

The same observation was made with serrapeptase in Japan during the late 1960s when researchers initially isolated the enzyme from the silkworm.

In fact, researchers in Europe and Japan proposed that serrapeptase was the most effective proteolytic enzyme for reducing inflammation

Since then, it has been found to have many possible uses and promising health benefits.

Please also see this article on Mullein which can also help clear mucous in the lungs, cleanse the bronchial tubes and sooth inflammation in the respiratory tract.

Serrapeptase is a chemical taken from the silkworm. It is a commonly used drug (Takeda Chemical Industries) in Japan and Europe. In the U.S., Serrapeptase is classified as a dietary supplement.

But of course the reason for the lack of research is that American Big Pharma cannot own, or patent this naturally occurring enzyme and so it cannot enter the market as a “drug” and therefore is not as well known and researched as it should be.

It is also used for conditions that involve pain and swelling (inflammation) including: Sinusitis, laryngitis, sore throat, ear infections, swelling after surgery, swelling of a vein with the formation of a blood clot (thrombophlebitis), and inflammatory bowel disease (IBD) including ulcerative colitis and Crohn’s disease.

Some people use Serrapeptase for heart disease and “hardening of the arteries” (atherosclerosis).

Women use it for non-cancerous lumpy breasts (fibrocystic breast disease), and nursing mothers use it for breast pain caused by too much milk (breast engorgement).

Other uses include treatment of diabetes, leg ulcers, asthma, and pus accumulation (empyema).


How does it work?

Serrapeptase helps the body break down protein. This might help decrease inflammation and mucous and therefore eradicate pain, by dealing with the root cause.

Due to lack of research WebMD state that it is also Possibly Effective for the following.

Facial swelling after surgery to clear the sinuses.

More evidence is needed to rate the effectiveness of serrapeptase for these uses.

Serrapeptase seems to be safe for adults when taken by mouth, short-term (up to 4 weeks). The long-term safety of serrapeptase is not known.

Surgery: Serrapeptase might interfere with blood clotting. There is a concern that it might increase bleeding during and after surgery due to the other drugs given (see more below). Stop using serrapeptase at least 2 weeks before a scheduled surgery.

Moderate Interaction. Be cautious with this combination.

Serrapeptase might decrease blood clotting. Therefore, taking serrapeptase along with medications that also slow clotting might increase the chances of bruising and bleeding.

The following doses have been studied in scientific research:

Serrapeptase is most commonly used for reducing inflammation — your body’s response to injury.

In dentistry, the enzyme has been used following minor surgical procedures — such as tooth removal — to reduce pain, lockjaw (spasming of the jaw muscles), and facial swelling.

Serrapeptase is thought to decrease inflammatory cells at the affected site.

One review of five studies aimed to identify and confirm the anti-inflammatory effects of serrapeptase compared to other drugs after the surgical removal of wisdom teeth.

Researchers concluded that serrapeptase was more effective at improving lockjaw than ibuprofen, codeine and corticosteroids, powerful drugs that tame inflammation.

What’s more, though corticosteroids were found to outperform serrapeptase in reducing facial swelling the day after surgery, differences between the two later on were insignificant. Still, due to a lack of eligible studies, no analysis could be performed for pain. But once again, it is logical to conclude that deal with the root coause of the swelling and inflammation and the pain will also stop. (See the next section)

In the same study, researchers also concluded that serrapeptase has a better safety profile than the other drugs used in the analysis — suggesting that it could serve as an alternative in cases of intolerance, or adverse side effects to other medications.

SUMMARY Serrapeptase has been shown to reduce some of the symptoms associated with inflammation following the surgical removal of wisdom teeth.

Serrapeptase has been shown to reduce pain — a common symptom of inflammation — by inhibiting pain-inducing compounds.

One study looked at the effects of serrapeptase in nearly 200 people with inflammatory ear, nose, and throat conditions

Researchers found that the participants who supplemented with serrapeptase had significant reductions in pain severity and mucus production compared to those who took a placebo.

Similarly, another study observed that serrapeptase significantly reduced pain intensity compared to a placebo in 24 people following the removal of wisdom teeth

In another study, it was also found to reduce swelling and pain in people following dental surgery — but was less effective than a corticosteroid

Ultimately, more research is needed to confirm the potential pain-reducing effects of serrapeptase and to determine what other conditions it may be useful in treating before it can be recommended.

SUMMARY Serrapeptase may offer pain relief for people with certain inflammatory ear, nose, and throat conditions. It may also be beneficial for minor postoperative dental surgeries.

Serrapeptase may decrease your risk of bacterial infections.

In a so-called biofilm, bacteria can join together to form a protective barrier around their group.

This biofilm acts as a shield against antibiotics, allowing bacteria to grow rapidly and cause infection.

Serrapeptase inhibits the formation of biofilms, thereby increasing the effectiveness of antibiotics.

Research has suggested that serrapeptase improves the efficacy of antibiotics in treating Staphylococcus aureus (S. aureus), a leading cause of healthcare-associated infections

In fact, test-tube and animal studies have shown that antibiotics were more effective when combined with serrapeptase in treating S. aureus than antibiotic treatment alone

Serrapeptase may be beneficial in treating atherosclerosis, a condition where plaque builds up inside your arteries.

It’s thought to act by breaking down dead or damaged tissue and fibrin — a tough protein formed in blood clots.

This could enable serrapeptase to dissolve plaque in your arteries or dissolve blood clots that may lead to stroke or heart attack.

However, much of the information on its ability to dissolve blood clots is based on personal stories rather than facts. Therefore, more research is necessary to determine what role — if any — serrapeptase plays in treating blood clots

May Be Useful for Chronic Respiratory Diseases

Serrapeptase may increase the clearance of mucus and reduce inflammation in the lungs in people with chronic respiratory diseases (CRD).

CRDs are diseases of the airways and other structures of the lungs.

Common ones include chronic obstructive pulmonary disease (COPD), asthma, and pulmonary hypertension — a type of high blood pressure that affects the vessels in your lungs.

While CRDs are incurable, various treatments can help dilate the air passages or increase mucus clearance, improving quality of life.

In one 4-week study, 29 people with chronic bronchitis were randomly assigned to receive 30 mg of serrapeptase or a placebo daily.

Bronchitis is one type of COPD that leads to coughing and difficulty breathing due to the overproduction of mucus.

People who were given serrapeptase had less mucus production compared to the placebo group and were better able to clear the mucus from their lungs.

However, further studies are needed to support these findings.

When taken orally, Serrapeptase is easily destroyed and deactivated by your stomach acid before it has a chance to reach your intestines to be absorbed.

For this reason, dietary supplements containing serrapeptase should be enteric-coated, which prevents them from being dissolved in the stomach and allows for release in the intestine.

The enzymatic activity of serrapeptase is measured in units, with 10 mg equalling 20,000 units of enzyme activity.

You should take it on an empty stomach or at least two hours before eating. In addition, you should avoid eating for about half an hour after taking serrapeptase.

SUMMARY Serrapeptase must be enteric-coated for it to be absorbed. Otherwise, the enzyme will become deactivated in the acidic environment of your stomach.

Potential Dangers and Side Effects

There are few published studies specifically on the potential adverse reactions to serrapeptase and mostly the side effects seem to be from when it is taken alongside harmful pharmaceutical drugs. These reported side effects, include:

Serrapeptase should not be taken along with blood thinners — such as Warfarin and aspirin — other dietary supplements like garlic, fish oil, and turmeric, which may increase your risk of bleeding or bruising.

SUMMARY Several side effects have been observed in people taking serrapeptase. It’s not recommended to take the enzyme with medications or supplements that thin your blood.

If you do choose to experiment with serrapeptase, make sure to speak with your healthcare provider first to determine whether it’s right for you.

IS IT POSSIBLE TO OVERDOSE ON CBD OIL AND CANNABIS?