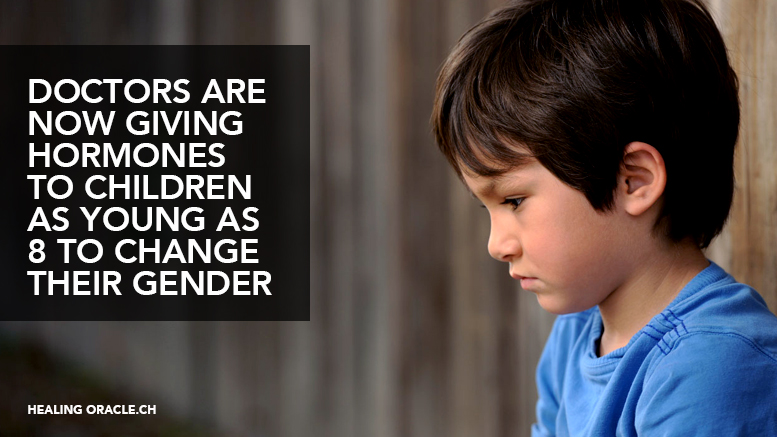 Dr. Michael Laidlaw, filed several Freedom of Information Act requests to research the findings, and discovered that in “2017, they lowered the minimum age for cross-sex hormones from 13 [years] to 8 [years].”

Laidlaw presented his findings during a panel discussion Tuesday at The Heritage Foundation in Washington, D.C.

The panel, “The Medical Harms of Hormonal and Surgical Interventions for Gender Dysphoric Children,” discussed the dangers of administering such treatments to young children.

“Imagine giving 9-year-old girls testosterone,” Laidlaw said. “They are in third or fourth grade. This is unbelievable, but this is going on.”

The panelists and attendees screened a video featuring Dr. Ilana Sherer and Dr. Johanna Olson-Kennedy — both of whom treat trans kids — who discussed how such treatments work on adolescents.

According to The Christian Post, “Sherer explained that puberty blockers are given to children at age 8 or 9, when they are in third and fourth grades. Olson-Kennedy is doing a 5-year study, for which she has received a $5.7 million National Institutes of Health research grant, and in one of her publications, it shows that mastectomies have been done on girls as young as 13. In the clip Laidlaw showed, Olson-Kennedy is seen on tape insisting adolescents have the capacity to make life-altering decisions, including to have their breasts removed.”

In the video, Sherer appears to shrug off the ordeal of having a mastectomy at such a young age.

“[H]ere’s the other thing about chest surgery,” she adds. “If you want breasts at a later point in your life, you can go and get them.”

“Under the nebulous concept of ‘gender identity,’ children as young as 8 are receiving injections for gender transition treatment,” Laidlaw said. “The phrase was defined in a recent court case as a person’s ‘core internal sense’ of their own gender and that it was the ‘primary factor’ in determining their sex, not biology.”

He added that the “research” is nothing more than scientific and medical experimentation on children.

“We are ignoring the voices of desisters and people who have come out of this and recognize their sex,” Laidlaw explained, “and the NIH is allowing unethical research to be conducted on adolescents, in my opinion.”

The dangers of transgenderism

Others on the panel included a former transgender activist and a mother whose daughter identified as transgender. Both parties spoke out on the dangers of encouraging transgenderism in children.

Walt Heyer, the trans activist who recently announced that the media and doctors misled him to believe that the answer to gender dysphoria was a transition, extensively addressed the dangers of young transition.

Heyer — a male who previously lived as a woman — revealed that many people aiming to transition have been sexually abused as children.

“In their mind, that is their defense mechanism for sexual abuse,” he explained.

Earlier this month A bill was introduced in the House of Representatives called “The Equality Act” that would deny parents and physicians the freedom and opportunity to treat children that express the desire to transition into the opposite sex in their best medical judgement. With parents pressured into accepting these harmful untested treatments.

Parents of children who claim to be transgender are told that hormones, “Puberty blockers” and surgery may be the only way to prevent their child from committing suicide, so as ever the approach is to medicate. Natural development mostly takes care of this and what of the child that changes their mind? The rate of suicide is far higher.

But what is happening with puberty blockers is that the child is not given the chance to explore what will happen naturally and nobody really knows as yet what this will do medically to the child later in life. This is an experiment.

No blood test, genetic testing, or brain imaging scans can find a “gender identity,” Laidlaw said, adding “there is no objective test to diagnose this, yet we are giving very harmful therapies on the basis of no objective diagnosis.”

Watch the Panels meeting at The Heritage Foundation in Washington, D.C. here:

According to Frontline in 2015 the medical risks are both known and unknown:

With the use of puberty blockers, “we’re really starting to some extent from a little bit more of a blank slate,” Finlayson explained. “We don’t have to be erasing or trying to get rid of all these other changes that occurred that they don’t want.”

However, the use of puberty blockers to treat transgender children is what’s considered an “off label” use of the medication — something that hasn’t been approved by the Food and Drug Administration. And doctors say their biggest concern is about how long children stay on the medication, because there isn’t enough research into the effects of stalling puberty at the age when children normally go through it.

The Endocrine Society’s guidelines suggest starting puberty blockers for transgender children when they hit a stage of development known as Tanner stage 2 — usually around 10 or 11 years old for a girl and 11 or 12 years old for a boy. The same guidelines suggest giving cross sex hormones — estrogen for transgender girls and testosterone for transgender boys — at age 16. However, doctors caution that estrogen and testosterone, the hormones that are blocked by these medications, also play a role in a child’s neurological development and bone growth.

“We do know that there is some decrease in bone density during treatment with pubertal suppression,” Finlayson said, adding that initial studies have shown that starting estrogen and testosterone can help regain the bone density. What Finlayson said there isn’t enough research on is whether someone who was on puberty blockers will regain all their bone strength, or if they might be at risk for osteoporosis in the future.

Another area where doctors say there isn’t enough research is the impact that suppressing puberty has on brain development.

“The bottom line is we don’t really know how sex hormones impact any adolescent’s brain development,” Dr. Lisa Simons, a pediatrician at Lurie Children’s, told FRONTLINE. “We know that there’s a lot of brain development between childhood and adulthood, but it’s not clear what’s behind that.” What’s lacking, she said, are specific studies that look at the neurocognitive effects of puberty blockers.