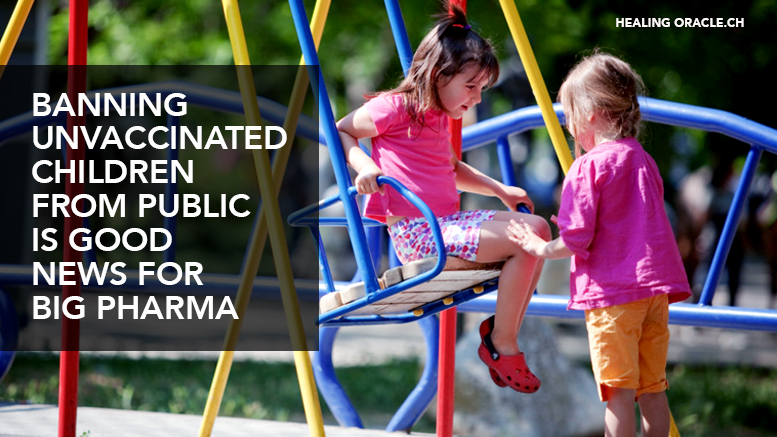 Officials in Rockland County, New York, have declared a countywide State of Emergency after a measles “outbreak” that is likely to be shedding from the vaccinated children from the strain itself and in reality only effects a very small group. But what a great welcoming party for RK Pharma who have just invested $17 million in Rockland.

The declaration will bar unvaccinated children from going out to public places until they receive the vaccination against measles or the declaration expires after 30 days, the New York Times and WPIX-TV reported.

Rockland County Executive Ed Day says at a news conference that the state of emergency taking effect Tuesday night is intended to persuade parents to have their children vaccinated to reverse the trajectory of the disease’s spread.

According to the Centers for Disease and Control, the measles are highly contagious and typically don’t show symptoms until one or two weeks after a person is infected.

But this makes little sense when you look at the reality…

According to Health Nut news: Remember, most people think of an “outbreak” as lots and lots of sick people but medically speaking, it’s just two people.

It is not currently clear how this ban will be enforced.

With the increase of vaccinations it would actually make far more sense to ban vaccinated children just after their shot, as they are likely to shed the measles strain to other children:

Is it not a little more than odd then, that during this period of mass media hysteria, Big Pharma is also moving in to the neighbourhood? For RK Pharma have just spent $17 million dollars in Rockland.

From IRG: (Jan 17, 2019) “Industrial Realty Group, LLC (IRG), a nationwide leader in real estate development and investment, is proud to announce RK Pharma has joined the New York Center for Innovation campus in Pearl River. The tenant, a pharmaceutical company specializing in developing injectable and oral pharmaceuticals, has signed a long-term lease and plans to bring approximately 100 jobs to the site.

“RK Pharma is an excellent addition to the scientific community on campus,” said John Mase, Chief Executive Officer of IRG. “The New York Center for Innovation has a deep history of excellence in research and development, and RK Pharma will continue that heritage into the site’s next chapter.”

You bet they will. And its not just in Rockland

Industry front groups like the American Academy of Pediatrics (AAP) and the National Association of County and City Health Officials (NACCHO) have seized the opportunity to introduce legislation to remove personal belief exemptions and religious exemptions for vaccinations required for school attendance. Nationwide, over 70 different bills have been introduced or are expected to be introduced in state legislatures to limit these types of exemptions.

Dr Hooker provided testimony last Friday, February 8, 2019, for the Washington State House Health Committee regarding the vaccines and the Personal Belief Exemption (PBE) bill that was introduced and she said:

“I recently had the privilege to testify in the Health Committee in the House of Representatives for Washington State and wanted to share some excerpts of my testimony. In Washington State, legislators have introduced a bill to remove the personal belief exemption specifically for the Measles Mumps Rubella (MMR) vaccine. I want to thank Karl Kanthak and Bernadette Pajer who both contributed important information for my testimony.”

The following is taken from my testimony:

“There is a problem with measles in Washington State, but it’s not low vaccination rates, it’s actually high vaccination rates with a vaccine product unable to provide lifetime immunity or vigorous passive maternal protection to infants during the first year of life.

When the measles vaccine was first introduced, most people over the age of 15 who had wild measles had lifetime immunity. In developed nations, like other communicable infections, measles was no longer dangerous except in rare circumstances because of inadequate nutrition, poor sanitation, and/or lack of healthcare. Because having the measles was a routine part of childhood, teens, adults, parents, and grandparents were immune. And because of maternal passive immunity, infants were protected. The death rate due to measles in Washington State in the four years prior to the introduction of the measles vaccine was 1.4 in 10,000 cases and approximately 2 in 1,000,000 in the general population.”