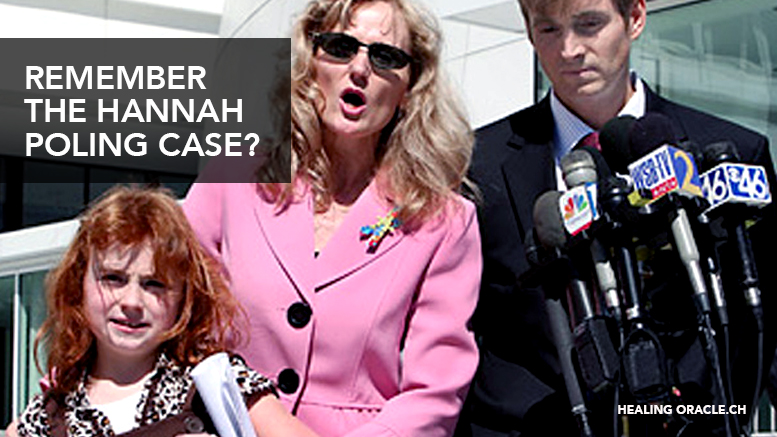 Does anyone remember when mainstream media also questioned vaccines and was able to report on the connection to autism? Much has changed in the last 11 years.

The attitudes and debate towards vaccinations seem to be becoming more and more heated on both sides. But does anyone actually remember when back in 2008, the Hannah Polling case was described as a “landmark case” that really should have changed many things?

Facebook have played a major role in censoring anything that questions vaccinations and we now live in arguably the most censored of all ages (in deed this article will most likely get censored, stopped and attacked by paid trolls like Fiona O’Leary) and so it is easy to forget that 11 years ago, mainstream media where actually questioning vaccines.

Time Magazine described this as a “chink” or a “question mark” over vaccine safety some eleven years ago:

“The relevance of the Poling case in 2008: …(T)here’s no denying that the court’s decision to award damages to the Poling family puts a chink — a question mark — in what had been an unqualified defense of vaccine safety with regard to autism”

“The first court award in a vaccine-autism claim is a big one. CBS News has learned the family of Hannah Poling will receive more than $1.5 million dollars for her life care; lost earnings; and pain and suffering for the first year alone.

In addition to the first year, the family will receive more than $500,000 per year to pay for Hannah’s care. Those familiar with the case believe the compensation could easily amount to $20 million over the child’s lifetime.”

Hannah was described as normal, happy and precocious in her first 18 months.

Then, in July 2000, she was vaccinated against nine diseases in one doctor’s visit: measles, mumps, rubella, polio, varicella, diphtheria, pertussis, tetanus, and Haemophilus influenzae.

Afterward, her health declined rapidly. She developed high fevers, stopped eating, didn’t respond when spoken to, began showing signs of autism, and began having screaming fits. In 2002, Hannah’s parents filed an autism claim in federal vaccine court. Five years later, the government settled the case before trial and had it sealed. It’s taken more than two years for both sides to agree on how much Hannah will be compensated for her injuries.

In acknowledging Hannah’s injuries, the government said vaccines aggravated an unknown mitochondrial disorder Hannah had which didn’t “cause” her autism, but “resulted” in it.

It’s unknown how many other children have similar undiagnosed mitochondrial disorder. All other autism “test cases” have been defeated at trial. Approximately 4,800 are awaiting disposition in federal vaccine court.

Time Magazine summed up the relevance of the Poling case in 2008: …(T)here’s no denying that the court’s decision to award damages to the Poling family puts a chink — a question mark — in what had been an unqualified defense of vaccine safety with regard to autism. If Hannah Poling had an underlying condition that made her vulnerable to being harmed by vaccines, it stands to reason that other children might also have such vulnerabilities.”

The Poling case was just one of thousands of cases filed in the National Vaccine Injury Program. But it was selected as a “test case” to evaluate the arguments underlying most of the other vaccine-autism claims.

At the time, the head of the federal Centers for Disease Control, which assures the public of vaccine safety, was Dr. Julie Gerberding. After insisting the settlement of the Poling case was not an admission of a direct vaccine-autism link, she left the CDC to become president of vaccines for Merck. Last December she was promoted to executive vice president for strategic communications, global public policy and population health at Merck.

Sharyl Attkisson was a CBS News journalist at the time and reported on the Poling case for CBS News on March 6, 2008. She said, “While the Poling case is the first of its kind to become public, a CBS News investigation uncovered at least nine other cases as far back as 1990, where records show the court ordered the government to compensate families whose children developed autism or autistic-like symptoms in children, including toddlers, who had been called ‘very smart’ and ‘impressed’ doctors with their ‘intelligence and curiosity’ … until their vaccinations. They were children just like Hannah Poling.”

Attkisson writes that the case was “ordered sealed, protecting the pharmaceutical vaccine industry and keeping the crucial information hidden from other families who have autistic children and also believe vaccines to be the culprit.” But word leaked out.

According to the New England Journal of Medicine, on March 6, 2008, the Polings took their case to the public. Standing before a bank of microphones from several major news organizations, Jon Poling said that “the results in this case may well signify a landmark decision with children developing autism following vaccinations.”

For years, federal health agencies and professional organizations had reassured the public that vaccines didn’t cause autism. Now, with DHHS making this concession in a federal claims court, the government appeared to be saying exactly the opposite. Caught in the middle, clinicians were at a loss to explain the reasoning behind the VICP’s decision.

The Poling case is best understood in the context of the decision-making process of this unusual vaccine court. In the late 1970s and early 1980s, American lawyers successfully sued pharmaceutical companies claiming that vaccines caused a variety of illnesses, including unexplained coma, sudden infant death syndrome, Reye’s syndrome, transverse myelitis, mental retardation, and epilepsy. By 1986, all but one manufacturer of the diphtheria–tetanus–pertussis vaccine had left the market. The federal government stepped in, passing the National Childhood Vaccine Injury Act, which included the creation of the Vaccine Injury Compensation Program (VICP). Funded by a federal excise tax on each dose of vaccine, the VICP compiled a list of compensable injuries. If scientific studies supported the notion that vaccines caused an adverse event — such as thrombocytopenia after receipt of measles-containing vaccine or paralysis after receipt of oral polio vaccine — children and their families were compensated quickly, generously, and fairly. The number of lawsuits against vaccine makers decreased dramatically.

When asked about vaccines triggering autism Dr. Bernadine Healy, former head of the National Institutes of Health said, “I think that the public health officials have been too quick to dismiss the hypothesis as irrational.” – CBS News, 2008

The hypothesis is not only rational, but conclusive in causing encephalitis (brain swelling), which triggered two children’s autism awarding their families millions through the Vaccine Court (the federal Vaccine Injury Compensation Program). – Huffington Post, 2013

Special Master Richard Abell, 2007, “The Court found that Bailey’s ADEM (acute disseminated encephalomyelitis) was both caused-in-fact and proximately caused by his vaccination. It is well-understood that the vaccination at issue can cause ADEM, and the Court found, based upon a full reading and hearing of the pertinent facts in this case, that it did actually cause the ADEM.”– Huffington Post, 2013

The Many Cases Filed Against the Vaccine Court

A group of parents have been awarded multi-million dollar settlements for dozens of families whose kids suffered brain damage including autism after receiving children vaccines.  These payments will be paid out as an annuity over the lifetime of the child. – Fox News, 2011

“The government has paid more than 1,300 brain injury claims in vaccine court since 1988, but is not studying those cases or tracking how many of them resulted in autism.” – CBS News, 2008

How the Vaccine Court Works

A great 5-minute breakdown video from 2015, showing how the Federal Vaccine Court works to the benefit of the manufacturers and to the detriment of those injured. “Do Vaccines Cause Autism” published the Canary Party is narrated by Rob Sneider.

Let us not forget the path that has led to today. With supposed “Fake News” an easy label to give anything you disagree with, is it not looking more like mainstream news that has become the largest source of Fake News? As fast forward to today and they are calling for mass vaccinations and that indeed children have a “right” to be vaccinated even without their parents’ consent. Whilst parents that have found out what is the vacccines, or done some research and are concerned for the safety of their children are bullied, threatened and can have their children removed from home and sent into the “care” system for believing in their child’s own immune system. Crazy times.