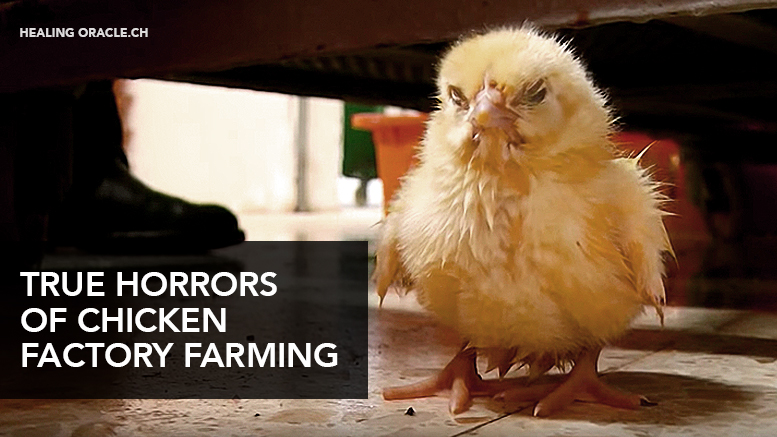 Our modern day diet is full of meat. Expectations are so high for it, that we expect it at least twice a day. This huge demand for meat is placing such high expectations on the industry and this shocking footage shows how chickens are treated far from naturally, or humanely.

Animal Equality, a London-based animal rights group, sent investigators undercover to industrial chicken hatcheries, to expose the truth about what happens to baby chicks in the first 24 hours of their lives.

A HORRIBLE WAY TO ENTER THE WORLD

Chicks that are just a few hours behind in hatching are thrown in trash bins, as are any chicks that appear to be weak or sick.

Female chicks are separated from the males and mechanically shot through chutes into containers to be shipped to factory farms where they will be egg laying machines.

Males of the “broiler” variety are shot full of vaccines and then sent down chutes that deposit them into cramped transport bins and trucked to factory farms to be fattened at a rate makes them enormous enough to be slaughtered within 6 weeks. The video explains that if humans were fattened at this same rate, a human baby would weigh 600 pounds in just two months.

For many, the quest to raise such fat birds in such a short while has outpaced the ability of a chicken’s legs to develop enough to support the weight. This could be a sad blessing as it dooms birds to be thrown away before they are sent to an even more inhumane death at the slaughterhouse.

DEATHS OF THE “SURPLUS NEONATAL CHICKS”

The poultry industry has various unemotional names for the newborns that will never have a chance to live beyond their first few hours of life: “surplus neonatal chicks,” “nonsalable chicks,” “day-old poultry.”

According to Animal Equality: “All egg production, whether ‘free-range’ or battery involves the death of male chicks.”

It is shocking to learn that male chicks from egg laying breeds are culled from the females and killed either by being gassed with carbon dioxide or thrown into giant grinders. This grinding process is called “maceration.” According to American Veterinary Medical Association’s poultry euthanasia guidelines, these grinders should have rotating blades or projections to cause “immediate fragmentation and death” of the day-old chicks.2

Mercy for Animals, another group dedicated to exposing the cruelty in the factory farming industry also investigated and documented these at Hy-Line Hatcheries in Iowa–one of the world’s largest hatcheries for egg-laying chicks.

Before the grinders were developed, there were other favored means to destroy male chicks on a massive scale at hatcheries. Here is what one researcher from the University of Vienna suggested: “Euthanasia methods for day-old chicks must also be economical and should not interfere with the use of the carcasses for animal food or fertilizer…For larger numbers of birds, the literature recommends homogenization in a crusher.” He went on to describe a “simple gas chamber” that had “the capability to euthanize approximately 8,000 chicks within 2-3 hours at minimal cost.” 7

While the United Egg Producers (that represent 95% of the egg producers in the U.S.) has pledged to end the practice of using the giant grinding machines, they say it will take several years to develop embryo-sexing technology that will identify male eggs before they are ever hatched. Meanwhile EACH DAY 700,000 male chicks are tossed into the giant grinders or gassed. 8

The Animal Equality video has a call to action for viewers—asking us to become vegan or eat less chicken.

If you do eat chicken, it is important to source your foods locally, so you can ask your farmer if they buy chicks from these giant, cruel hatching operations. Hopefully, with time, consumers can exert pressure to ensure that all animals whose lives are consigned for human consumption are raised—and slaughtered—in the most humane conditions.