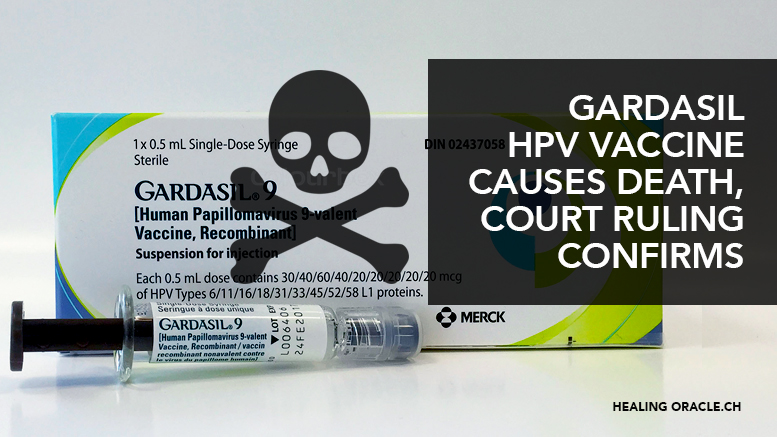 The infamous human papilloma virus (HPV) vaccine by Gardasil is in use around the world for both girls and boys, even though an American court has ruled beyond the shadow of a doubt that the vaccine can kill people.

The Tarsell family lost their 21-year-old daughter when she died shortly after getting this vaccine and because of their determination to hold the vaccine maker accountable, they have proven that this vaccine is dangerous and needs to be removed from the schedule of vaccines.

No family should ever have to go through such an ordeal, but for the sake of justice for Christina Tarsell, the Tarsell family won an incredibly important judgement. Her story is told in brief, here:

Hi. My name is Christina Richelle Tarsell, but people call me Chris. I celebrated my 21st birthday in November 2007; I did not live to see my 22nd.  Suddenly and inexplicably, I died in bed in June 2008. An autopsy report said that the cause of my death was undetermined. My family wanted to know what happened to me and led by attorney Mark Sadaka, they pursued an extensive investigation. World-class experts in immunology, Dr. Yehuda Shoenfeld and   cardiology and electrophysiology, Dr. Michael Eldar determined that I died from an arrhythmia induced by an autoimmune response to the HPV vaccine Gardasil which I had received only days before my death.

Incredibly, by law, vaccine manufacturers like Merck cannot be held liable for injuries and deaths caused by their vaccines. The only recourse my family had was to file a claim against the Secretary of Health and Human Services to hold them accountable.

After 8 long years, the government finally conceded that we met our burden of proof that Gardasil caused my death.

This is a precedent setting case. I am deeply grateful to everyone who, guided by truth and a higher consciousness, would not let my death be dismissed as a “coincidence.” Here are the links to the ruling by Judge Coster Williams and the revised ruling by the Special Master.

Confirmed by the Department of Health and Human Services (HHS), the final ruling serves as a warning that Merck’s Gardasil vaccine can cause autoimmune problems which may cause sudden debilitation and/or death.

The final ruling has been confirmed by the Department of Health and Human Services: Merck’s Gardasil vaccine causes autoimmune problems that cause sudden debilitation and/or death. This ruling supports claims that the vaccine is just too dangerous to risk, and to date we know of at least 271 young women who’ve died after getting the vaccine, and over 57,520 reports of adverse reactions to the vaccine.

Their case was first taken up by the Vaccine Court, which is a system designed to compensate families for damages done by vaccines, all the while helping to avoid public scrutiny and awareness of the hidden dangers of vaccines.

Vaccine makers pay an excise tax to this system for every vaccine they sell. This money (cost of doing business) is used to pay out damages to select families who can medically prove they were damaged by a vaccine. This system protects vaccine makers from being sued in a true court of law, ensuring that vaccines will continue to be manufactured for the “good of all.” [Source]

The judge in the case, Judge Williams awarded a victory to the Tarsells:

Petitioner’s motion for review is GRANTED. The Special Master’s decision denying compensation is VACATED, and the case is REMANDED to the Special Master for further proceedings consistent with this decision…

The Court’s Opinion and Order required additional consideration consistent with the legal principles articulated by the Court for analyzing the evidence in this tragic case about a woman, Christina Tarsell, who died much too young. Under the approach dictated by the Court, Ms. Tarsell is entitled to compensation. The parties should anticipate that a separate order regarding damages will issue shortly.

This ruling should be major public news and people should know that this vaccine is causing so much injury, harm and even death.

Alex Pietrowski is an artist and writer concerned with preserving good health and the basic freedom to enjoy a healthy lifestyle. He is a staff writer for WakingTimes.com. Alex is an avid student of Yoga and life.

This article (Court Ruling Confirms Merck’s Gardasil HPV Vaccine Kills People – Did Anyone Even Notice?) originally created and published by Waking Times and is published here under a Creative Commons license with attribution to Alex Pietrowski and WakingTimes.com.