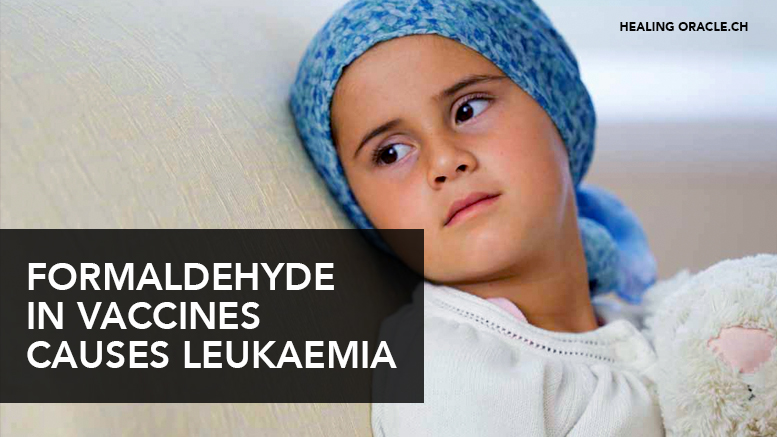 Leaked emails from the U.S. Environmental Protection Agency confirms that Formaldehyde, a key ingredient in vaccines, is the number one cause of Leukaemia

The EPA, under pressure from the chemical industry, was forced to delay the release of a groundbreaking study confirming the cancer risks from formaldehyde, according to confidential emails seen by Reuters.

Reuters.com reports: Top EPA officials have declined to review the study or be briefed by its experts on the findings, the internal communications showed.

The EPA already lists formaldehyde, used in building materials like plywood and foam insulation, as a probable carcinogen. The new report is expected for the first time to detail its links to leukaemia.

The report, an update of the EPA’s existing human health assessment of the widely used chemical, was completed by scientists from the agency’s Integrated Risk Information System (IRIS) late last year and must go through a months-long internal review process before it can be issued to the public for comment.

The delay could further heighten scrutiny of EPA, already fending off complaints that it and the White House considered blocking a study on water contamination by PFOA and PFOS, chemicals used in Teflon and firefighting. Politico reported on May 14 that a Trump administration aide had warned release of that study would cause a “public relations nightmare.”

“By sweeping scientific assessments under the rug, EPA fails to fulfil its mission of protecting public health. The public has the right to know about public health threats,” said Yogin Kothari, UCS Washington director.

The EPA told Congress in early February it expected to start the agency review process for the formaldehyde assessment “shortly,” according to the EPA staff communications.

But in follow-up communications between agency employees in late April, one career staffer wrote that EPA Chief of Staff Ryan Jackson, Assistant Administrator for the Office of Air and Radiation Bill Wehrum, and Wehrum’s deputy Clint Woods had not given their permission to initiate the review and had refused offers from EPA scientists to brief them on it.

“No office in the EPA is interested in formaldehyde,” the staffer wrote.

The 60-to-90-day agency review and a subsequent inter-agency review of a similar duration must happen before the study can be issued for public comment.

Prior to the communications, the chemistry industry’s main lobby group, the American Chemistry Council (ACC), had been pressuring the EPA to avoid drawing links between formaldehyde and leukaemia in its assessment.

EPA’s deputy assistant administrator of the Office of Chemical Safety and Pollution Prevention, Nancy Beck, previously served as director of regulatory science policy at the ACC. Beck is not named in the communication.

The NAS supported the prior EPA assessment’s finding that formaldehyde can, in certain cases, cause cancer in the nose and throat. source: https://explainlife.com

Democratic senators Ed Markey, Sheldon Whitehouse and Tom Carper last week wrote to EPA chief Scott Pruitt to ask about delays to the report and request communications between the EPA and ACC related to the formaldehyde assessment, saying they were concerned the agency was bowing to industry pressure.

The lobby group met with EPA political staff, including Deputy Assistant Administrator for the EPA’s Office of Research and Development Richard Yamada, on January 24 to make a presentation on the subject, ACC Formaldehyde Panel spokeswoman Sarah Scruggs told Reuters.

She provided Reuters a link to the presentation, titled “Formaldehyde IRIS Assessment.” [tmsnrt.rs/2KRcVA2]

“Any draft assessment that attempts to associate formaldehyde exposure with leukaemia is scientifically indefensible,” Scruggs said, adding that the ACC questions the “scientific rigor and methodologies” used by IRIS.

EPA spokeswoman Molly Block declined to comment on the delays or the ACC’s possible role.

“We continue to discuss the assessment with our agency program partners and have no further updates to provide at this time,” she said in an email.

Reuters was able to review the staff communications on condition that the identities of the people involved remained anonymous, given sensitivity of the issue.

EPA’s last attempt to update its assessment of formaldehyde in 2010 had been criticized by the National Academy of Sciences (NAS) for failing to draw “clear links” between formaldehyde and leukaemia. The new attempt was meant to resolve that.