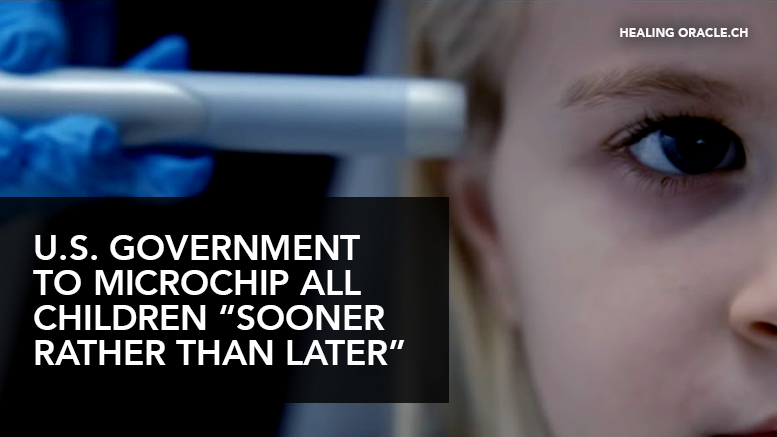 The U.S. government intends to further their control over the lives of Americans by introducing microchipping for children in the very near future.

As time goes by, the government seems to want to regulate the lives of Americans more and more. Sometimes these decisions for further regulation actually help the American people, but this is still up for debate depending on who you are, and sometimes, the reasons behind these decisions are dubious and must be called into question.

The latter scenario has been occurring recently as news of the future of tracking people has been spread around. The concept is simple but the implications behind it are serious: the U.S. government intends to introduce microchipping for children in the near future in an effort to better keep track of them.

THE MARK OF THE BEAST

Though it’s easy to say that this technology would simply protect children from being kidnapped or getting lost, it goes much deeper than that. Proponents of microchipping, such as mother of three Steffany Rodriguez-Neely, have pointed out that, “If it’ll save my kid, there’s no stuff that’s too extreme. Microchipping would be an extra layer of protection, if something bad does happen.” She added, “If a small chip the size of a grain of rice could have prevented a tragedy, I think most parents would have said, ‘I think I would have done it.

Rodriguez-Neely doesn’t seem to take into account what having a microchip could mean for the child once they grow up or what else the microchip might be used for without the parent’s or child’s permission. Electronics expert Stuart Lipoff attempts to compare microchips in humans to barcodes on products in the store, but also falls short. He told NBC, “When barcodes first came out in the late 1960s, people were appalled. They were wary of them and did not understand the concept. Today, it is so commonplace, we don’t even notice it. A microchip would work much in the same way.” There is a significant difference between barcodes that identify and hold information about products and tracking devices that store records inside of people. Some microchips may only work when they are scanned, but others used in pets can also track the location of the pet at all times using GPS, and that’s where the true concern lies. If parents are able to gain access to their child’s location, there’s a likelihood that this information could be hacked and complete strangers could also track them. In addition, the children are stripped of their freedom to choose whether they want the chip implanted in them and must live with the decision their parents make for them for the rest of their lives. One argument in favor of the microchip is the ease with which information about a person can be stored and retrieved, such as important medical records, bank accounts, and much more. However, is the convenience of the chip worth the unforeseen troubles that would accompany the introduction of this device? The idea behind the microchip conjures up thoughts of science-fiction tales gone awry, but the choice would ultimately, or at least hopefully, be given to citizens. If they embrace it with open arms, microchips could become the norm, but if they reject it, the idea would fade away like many others. If NBC reporter Melanie Michael, who interviewed several people to uncover facts and opinions about the future of the microchip, is right, then this technology could be introduced “sooner rather than later.”

If you are skeptical,
Oh it WILL happen … this is indeed going to be the coming mark of the beast. All the talk and soft approaches such as this are to condition people to the idea. But there will come a point where people will be forced to take it … initially they won’t be able to buy or sell (or work) without it. But then, they will reach a point in the one-world system where if they don’t take it, there will be consequence to pay which could lead to having your child placed in “care”.

This is a way where the Government trying to control everyone with a chip and in a way this is dictatorship and the Government shouldn’t try to follow any other countries outside the United States. This is what I call insane and anyway where is the freedom by micro chipping everyone, I even don’t like the thought of micro chip animals and as I looking at “The Declaration Of Independence”, well where are the Independence by this methods of micro chipping everyone and even babies. Let me walk you In the fabric of what the 1st Amendment says “Congress shall make no law respecting an establishment of religion or prohibiting the free exercise thereof; or a abridging the freedom of speech, or of the press; or the right of the people peaceably to assemble, and to petition the Government for a redress of grievances ” and now in this Amendment of the Constitution, it doesn’t say anything about the Government or the Congress to dictate or control everyone. So we the people of the United States of America have the right to petition and let me say it again we have the right to petition the Government but in other words the Government have no right to micro chip people.

What a great way for the government to control the population. Who is not  saying that at any given point they could push a button to detonate these chips to kill the human race, at the very least they will change the vibrational energy of the human race. What a terrible idea, agreed the mark of the devil and any loving parent wouldn’t even think about doing this to their kids.  Government Natzi’s.