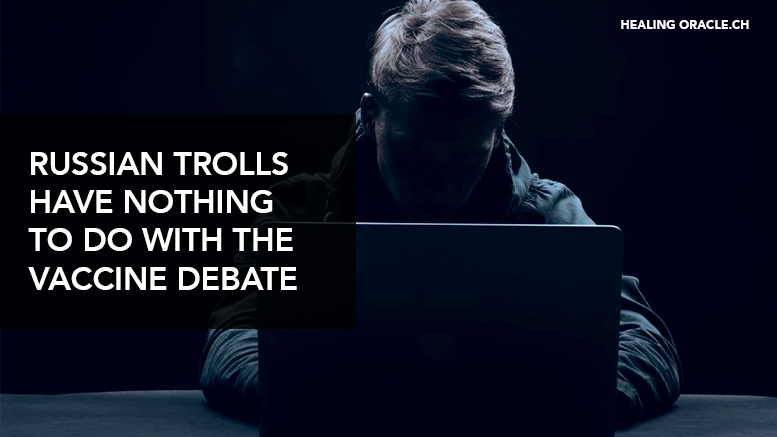 Multiple corporate media outlets have latched onto a recent study published in the American Journal of Public Health. The study claims to give evidence that Russian trolls are “eroding public consensus on vaccination.”

The BBC reported, “The researchers reviewed more than 250 tweets about vaccination from accounts linked to the St Petersburg-based Internet Research Agency (IRA).” From those 250 tweets David Broniatowski, the study’s lead author, went on to make some sweeping statements concluding “A significant portion of the online discourse about vaccines may be generated by malicious actors with a range of hidden agendas,”

The Washington Times writes, “The vast majority of vaccine-related tweets analyzed in the study came from users that couldn’t conclusively be categorized as people, cyborgs, or bots, by a tool called “Botometer.” Those actors might be people who really believe vaccines are dangerous, trolls trying to exploit the controversial topic to deepen divisions in American society, or bots using controversy as clickbait.”

So if you are someone who believes “vaccines are dangerous,” the “Botometer” may have labeled you as a Russian troll.

The study researchers wrote that, “…normalizing these [vaccine] debates may lead the public to question long-standing scientific consensus regarding vaccine efficacy,”

By making such statements in their study, the researchers’ focus and wider understanding appears to be caught in a myopic echo chamber. The “long-standing consensus regarding vaccine efficacy” and perhaps more importantly, safety, has been in question for sometime now within the general public and greater scientific community. Before researchers were uncovering hidden agendas and investigating Russian election-meddling bots sowing divisiveness, the ‘vaccine debate’ was alive and well due to the unsettled science, lack of oversight and regulatory capture underpinning the current vaccine paradigm.

The ‘safe and effective’ vaccine narrative is wearing thin among the general public and also within both the academic and scientific communities. Legitimate findings, both legally and scientifically, have cast serious doubt about the current ever-expanding, one-size-fits-all vaccine model. The study and the way its findings are being interpreted by researchers and reported by media outlets is simply one-sided at best.

It is far from the scope of this article to chronicle the mountains of data and points corroborating why larger sections of the public have lost faith in vaccination. Here are a few recent examples:

Broniatowski continued to remark on his study’s findings by stating, ”One of the things about them that was weird was that they tried to — or they seemed to try to — relate vaccines to issues in American discourse, like racial disparities or class disparities that are not traditionally associated with vaccination,”

History disagrees with Broniatowski regarding his “racial disparities” comment. Unfortunately, racial disparities have been deeply associated with distrust in vaccination campaigns and the public authorities who promote them. The “Tuskegee syphilis experiment” was an infamous, unethical, and malicious clinical study conducted on rural African American men in Alabama for a 40-year period between 1932 and 1972 by the US Public Health Service. Arguably the most infamous biomedical research study in US history, the experiment saw US health officials deliberately infect the men with syphilis and then withhold treatment to all the participants to study the progression of the untreated infection. The US Centers for Disease Control and Prevention (CDC), who controlled the later years of the study, promoted it and gained the support of the American Medical Association and the National Medical Association as late as 1969. ​

Author and researcher Wayne Rhode describes another clandestine CDC vaccine program initiated in 1989.  Rhode writes, “…an experimental measles vaccine was given to approximately 1,500 inner city minority children in Los Angeles County. Most of these children were six months of age.” Parents were purposely denied informed consent by not being told their children were being experimented on with a measles vaccine which caused great harm, with deaths and severe injuries in other parts of the world. Due to reports showing harm from Haiti, Senegal, and Guinea-Bissau, the CDC cancelled the LA County program in October 1991. The participants were only surveilled for roughly six months and all vaccine injuries were unable to be petitioned or compensated for in vaccine court because of the experimental nature of the vaccine.

In 2014, senior CDC scientists Dr. William Thompson admitted he and his coauthors committed research fraud on the agency’s seminal 2004 study looking at the MMR vaccine and autism. Thompson claimed they destroyed data showing, among other things, a disproportionately large jump in the incidences of autism spectrum disorder in African American boys after the MMR vaccine. To this day the media has largely censored any mention of Thompson and his admissions, Congress refuses to hold a hearing to investigate and there has been no attempt to reanalyze Thompson’s data from the study.

For the rabid pro-vax community and its public mouthpieces, the Russian troll study is a life raft against continued waves of science and inconvenient facts shattering their ‘safe and effective’ vaccine paradigm. The BBC writes, “Despite science overwhelmingly and indisputably advocating in favour of immunisation, a growing number of parents around the world are resisting medical advice by going their own way.” Mounting evidence shows that the benefits of vaccination have been overstated while its risks have been understated. The Russian Twitter narrative is yet another deflection away from addressing the risks and conflicts surrounding the current vaccine paradigm.

No longer able to ignore debate and cherry-pick facts, fanatical vaccine pushers appear to be clinging to the Russian study as a final refuge and ‘proof’ that social media debate which doesn’t fall into the narrowly defined parameters of settled vaccine science should be censored. It’s no secret that major social media outlets are clamping down on discussion and conversation. Operating initially as an open platform of idea sharing, many social media outlets gained millions of users and corresponding marketshare. Now they have been throttling back and outright censoring accounts representing wide varieties of social and political views. The historically dangerous precedent appears to now be flirting with the online ‘vaccine debate’ with the recent study being used as further proof that anyone who questions vaccination, for any reason, must be censored. Politicians are floating bills in favor of such censorship while Big Tech has shown no signs that they value free speech and open discussion. Is a pivotal turning point upon us?

Love and light
Amanda Mary Jewell and The Healing Oracle team
—
Disclaimer: This article is for public knowledge and we do not gain anything financially from this free service. It is not funded by advertising, or any product endorsements, neither do we gain financially from recommending these products, or services.