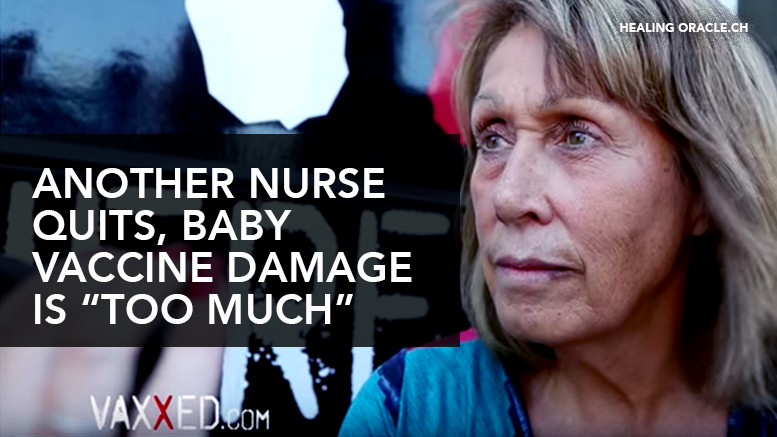 There is something happening within the US medical community. An awakening that is challenging the normally unchallenging, ‘business as usual’ atmosphere of many hospitals across the country. As many are arriving at the painful realization that their job is often to follow unethical orders and push the products of a monopolistic pharmaceutical industry.

The breakthrough success and unique phenomenon of the documentary film Vaxxed From Cover-Up to Catastrophe continues to make history. The popularity of the film is a daily reminder that government oversight and regulatory agencies have failed the American people.

The Vaxxed Bus — tirelessly touring cities since the film’s release — is a daily reminder that the mainstream media has failed in their duties at best, or willfully covered up the crime of the century at worst. With each city the bus visits, the Vaxxed team is doing the muckracking, gumshoe investigative journalism that once was the backbone of American investigative journalism.

Crimes are being committed in Hospital Neonatal Intensive Care Units

Within the realm of the vaccine industry, there are many tragic stories and underreported bombshells waiting to be spotlighted. One such narrative, hiding in plain sight, is the routine vaccine injury happening in Neonatal Intensive Care Units (NICU) across the US.

The ongoing events were first brought to the public’s attention by nurse whistleblower Michelle Rowton of Nurses Against Mandatory Vaccines on May 1, 2015. In an interview with infowars.com, Rowton revealed the following bombshell information:

“Oh wow, this is so embarrassing this 25 weeker never actually required a breathing tube and going on the vent after he was born, he was so strong. But we gave him his two month vaccinations and he got incubated last night… Ha ha, oops how embarrassing.”

And: “The step-down units are calling the NICU’s and saying: ‘hey we’re going to go ahead and give these four babies their two month shots today, make sure you have beds ready because we all know they’re going to have increased breathing difficulties, feeding and digestion difficulties, apnea, and bradycardia.'”

The practice of expediency and strict adherence to a questionable vaccine schedule put forward by the US Centers for Disease Control and Prevention (CDC) — “a troubled agency” in the words of Robert F Kennedy Jnr— is creating untold human injury and suffering.
Three months after Rowten’s whistleblowing admissions, new research from the Journal of the American Medical Association Pediatrics journal titled Adverse Events After Routine Immunization of Extremely Low-Birth-Weight Infants confirmed essentially 100 percent of Rowton’s whistleblowing statements which at the time seemed almost surreal. The Pediatrics study, comprised of 13,926 infants, concluded:
“All ELBW [extremely low-birth-weight] infants in the NICU had an increased incidence of sepsis evaluations and increased respiratory support and intubation after routine immunisation.”
The back to back revelations sent shockwaves through the alternative medical community and strengthened the case for immediate investigations, yet none happened at the government, hospital, or corporate media levels.
It was [pharmaceutical] business as usual until another nurse whistleblower came forward and was filmed by the Vaxxed Bus team in Redding, California on January 12, 2017. This new whistleblower nurse, named Joanne, stated that she decided to retire early because she could no longer be a part of the routine damage she was seeing in her NICU.

Joanne stated: “The micro preemies can be born as much as four months early; two months they get their vaccines. We see them go off on their feeds, lethargic, fevers and it sets them back…and I don’t want to be a part of that anymore.”

Both whistleblowing nurses and a respected medical journal stated that at the two month marker, when some of the NICU infants should still be in their mother’s womb, the six CDC-mandated vaccines rapidly degrade the health of the infants. The current program of vaccinating every newborn at birth and with another round of vaccines at two months does not take into account the severely underdeveloped and vulnerable preemies. In addition, the combined toxic adjuvant load upon a premature infant’s body is being confirmed to cause a range of physiological challenges simply ignored by the current US medical system.

A quick look at the group of vaccines given at birth and two months reveal fraudulent approval studies and raise red flags.

The Hepatitis B vaccine, the IPV vaccine, and the HIB vaccine show purposely skewed research during each respected vaccine’s approval trial. Each vaccine trial was set up, not with a vaccinated versus a non-vaccinated or placebo control group, but with a control group that received either one or multiple vaccines.

The outcome of this perplexing study design casts the single vaccine group awaiting approval in a positive light by allowing the pharmaceutical company to claim that their vaccine causes no more adverse reactions than the multi-vaccine ‘control’ group.

Putting aside the research fraud and flawed study designs that haunt many vaccine trials, there has never been a safety study conducted to show that combining all the vaccines recommended by the CDC from zero to two months is safe. In fact, the CDC’s own report found that mixed exposures to chemical substances and other stress factors may produce “increased or unexpected deleterious health effects.”

“exposures to mixed stressors can produce health consequences that are additive, synergistic, antagonistic, or can potentiate the response expected from individual component exposures.”

In the (willful) absence of proper vaccine studies confirming safety, the public must rely on the continued alarms raised by the nurses on the front lines who are seeing the injuries.

The individuals stuck within such a system are faced with two choices. First, they can unconsciously obey their superiors/employers — and in doing so — become part of a Nuremberg-style lineage of people “just following orders.” Or they disobey and simply walk away from an abusive, broken system and even some have the courage to take a stance and speak out. It’s a brave stance to take, with an uncomfortable life ahead, with no further guaranteed employment thereafter. But their conscience and soul will be theirs again. So which is the greater price to pay?

How long will the US medical system continue to sweep these daily NICU vaccine injuries under the rug to save face for their hospitals and the larger CDC-pharmaceutical complex? How long will doctors and nurses continue to follow orders against the established medical ethics of “do no harm”?