Here at Healing Oracle we love Pineapples. Here are some facts that you may or may not know about the super fruit.

Scientifically, it is known as Ananas comosus and belongs to the family of Bromeliaceae, in the genus; Ananas.

Did you also know that the Pineapple is not a single fruit, but a group of berries fused together?

Plus, it doesn’t grow on trees like most people seem to think these days. Myla the 5-year-old is here to explain:

Fresh pineapple is low in calories. Nonetheless, it is a storehouse for several unique health promoting compounds, minerals, and vitamins that are essential for optimum health.

100g provides just about 50 calories; equivalent to that of apples. It’s flesh contains no saturated fats or cholesterol. Nonetheless, it is a rich source of soluble and insoluble dietary fiber like pectin.

Fresh pineapple is an excellent source of antioxidant vitamin; vitamin-C. 100 g fruit contains 47.8 or 80% of this vitamin. Vitamin-C required for the collagen synthesis in the body. Collagen is the main structural protein in the body required for maintaining the integrity of blood vessels, skin, organs, and bones. Regular consumption of foods rich in vitamin-C helps the body protect from scurvy; develop resistance to combat infectious agents (boosts immunity) and scavenge harmful, pro-inflammatory free radicals from the body. 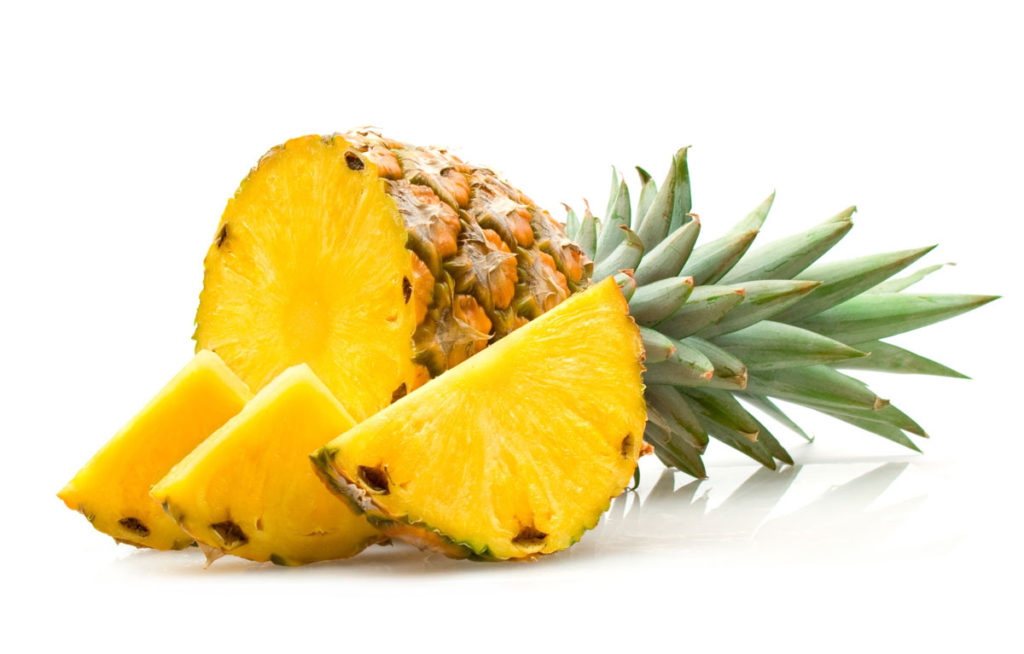 It also contains small amount Vitamin-A (provides 58 IU per 100 g) and β -carotene levels. These compounds are known to have antioxidant properties. Vitamin-A is also required maintaining healthy mucosa, skin, and is essential for vision. Studies suggest that consumption of natural fruits rich in flavonoids helps the human body to protect from lung and oral cavity cancers.

Further, ananas fruit is rich in the B-complex group of vitamins like folates, thiamin, pyridoxine, riboflavin and minerals like copper, manganese, and potassium. Potassium is an important component of cell and body fluids, helps controlling heart rate and blood pressure. Copper is an essential cofactor for red blood cell synthesis. Manganese is a co-factor for the enzyme superoxide dismutase, which is a very powerful free radical scavenger.

Pineapple (ananas) season lasts from March until June when fresh fruits available in the markets at their best. In the store, choose that are heavy for their size. While larger fruits will have a greater proportion of edible flesh, they make no difference in quality over a small size pineapple.

Choose fruit that should be free of soft spots, mould, bruises and darkened “eyes,” all of which may indicate that the fruit is past its prime. Some people judge freshness, ripeness, and quality by tapping a finger against the side of the fruit. A good, ripe pineapple has a dull, solid sound while a hollow thud indicates immaturity and poor quality. It stops ripening as soon as it picked; therefore, choose fruit with a fragrant sweet smell at the stem end. Avoid those that smell musty, sour or fermented.

Ripe fruits perish soon if left at room temperature and should be eaten rather immediately after purchase. Moreover, since they are chill sensitive and therefore, cannot be stored in the refrigerator for long periods. However, if not readily eaten; you may clean the fruit and place the whole or cut sections wrapped inside a thin plastic cover in the refrigerator for 1-2 days.

It can also adjust the smell and flavour of our bodily fluids.

The history of the Pineapple

One of the most prized and popular fruits, the pineapple or “ananas” has an interesting history. Originally indigenous to local Paraguayans in South America, it spread from its native land by the local Indians up through the South and Central Americas and to the West Indies. Later, it was brought to Spain when Columbus discovered Americas’ in 1493. In the 15th and 16th centuries, it spread to rest of the world by the European sailors (just like tomatoes) who carried it along with them to protect themselves from scurvy, a disease caused by the deficiency of vitamin-C.

Pineapple is a tropical, perennial, drought-tolerant plant. It reaches up to 5-8 ft in height and spreads around about 3-4 feet radius cover. It is essentially a short, stout stem with a rosette of waxy long, needle-tipped leaves.

The plant bears several long, oval to cylindrical fruits during each season from March until June.

Botanically, the A. comosus described as a compound (multiple) fruit that develops from many small fruitlets fused together around a central core. Its pulp is juicy and fleshy with the stem serving as a supporting fibrous core. The outer skin features rough, tough, and scaly rind. The color in the ripe fruits may be yellow, orange-yellow or reddish. Internally, its juicy flesh may range from creamy white to yellow and has a mix of sweet and tart taste with rich flavor. Each fruit measures up to 12 inches in length and weighs 1 to 8 pounds or more. 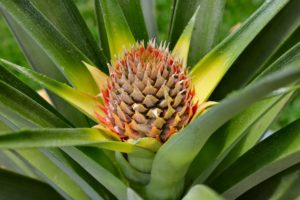 Pineapple can be cut and peeled in many ways. Usually, the crown and the base of the fruit are chopped off with a knife. To peel the fruit, place its base side down and carefully slice off the skin, carving out any remaining “eyes” with the tip of your knife. Once the rind removed, cut the fruit into desirable chunks.

One may also use pineapple corer/slicer machine to make the job easier. While they provide a quick and convenient method for peeling and coring pineapples, sometimes, they result in a wastage of a good amount of fruit since they often cannot be adjusted for different sized fruits. Similarly, some markets offer devices that will peel and core the ananas, but once again, this process may result in wastage of some fruit.

Here are some serving tips:

This exotic fruit has been a symbol of friendship and hospitality, for centuries. To know about the history of pineapples, read on…

Pineapples are a fruit, we all love to eat. Pineapple food recipes are most delicious; but not many of us know the origin of this fruit. The word ‘pineapple’ is said to have been first mentioned in English language in 1398. It was named pineapple because of its pine-cone shape and juicy nature. The botanical name is Ananas comosus.

The pineapple fruit is believed to be originated in Paraguay and southern Brazil. It was later cultivated throughout South America by the natives, before it reached the Caribbean. In 1493, Christopher Columbus discovered the pineapple fruit on the Caribbean island of Guadalupe. When the second voyage of reached the Caribbean island, Columbus’s crew went ashore to the Carib village, they found heaps of freshly gathered vegetables and fruits, including pineapples. Christopher Columbus decided to take them back with him.

When Columbus introduced pineapples to Europe, they became very popular. During those times, pineapples literally crowned the most important banquets. They were often held aloft on special pedestals. Ships brought the preserved pineapples from the Caribbean islands like expensive ornaments. The fresh pineapple fruit was even more costly and difficult to obtain as only few fast ships could deliver fresh pineapples in a good condition, and that also if the fruit could survive the climate. Pineapples became a celebrity fruit and a curiosity for epicureans and horticulturists as well.

It is believed that the Spanish introduced the first pineapples to Hawaii, in 1527, on the Big Island. Then, it is believed to have spread in Asia and West Indies. It took two centuries of efforts for the European gardeners to be able to find a method for growing pineapple plants. Thus, up to the 16th century, the pineapple remained uncommon.

Pineapple became an integral part of the coat of arms (official symbol of a particular family or state), of the colony of Jamaica, in 1661. People also started considering the pineapple fruit as a symbol of England’s American colonies. It was an honor to be treated with the display of pineapple-topped food. People who could not afford buy it, used to rent it for the occasion. Some people even re-sold it to others, once their purpose had been accomplished. So, in this way, the pineapple fruit, eventually became a symbol of hospitality and friendship. It obviously attracted the attention of architects, artisans and craftsmen, who incorporated big copper and brass pineapples in the wind vanes of important buildings. They also engraved wooden pineapples into door headers, stenciled them on walls and canvas mats. People made tablecloths, napkins, carpets and draperies woven with pineapple designs and had them cast into metal hot plates. Eventually, people succeeded in cultivating pineapples. The cultivation of pineapples began in European hothouses in early 1720s. Even, George Washington liked pineapples, when he tested the fruit, in 1751.

In 1899, James Dole arrived in Hawaii, and a year later, he started a pineapple plantation in Wahiawa. In 1901, Dole also built the first pineapple cannery. He was commonly known as the ‘Pineapple King’. Canned pineapple which was first introduced in 1901, wasn’t widely available. In 1911, Henry Ginaca, an engineer, successfully invented a machine that could remove the outer shell of the pineapple. The machine was capable of removing the outer shell, inner core and both ends of 100 pineapples, within a minute. Dole bought this machine, which helped his business to grow tremendously. In 1922, James Dole bought the island of Lanai, where he cultivated the largest pineapple plantation in the world. There, he grew 75 percent of the total world supply of pineapples, in its peak years. By 1950, one-third of world’s pineapple production and 60 percent of the world’s canned pineapple was produced in Hawaii. James Dole passed away in 1958, but even today the Hawaiian Pineapple Company, is still known worldwide, as the Dole Food Company. But unfortunately, its production is reduced to the just 10 percent of the world’s pineapple output. Apart from Hawaii, China, Mexico, Thailand, Honduras, Dominican Republic, Philippines and Costa Rica are other countries contributing to the pineapple industry.

Pineapple fruit contains a proteolytic enzyme bromelain that may cause excessive uterine bleeding if consumed in large quantities during pregnancy. (Medical disclaimer).