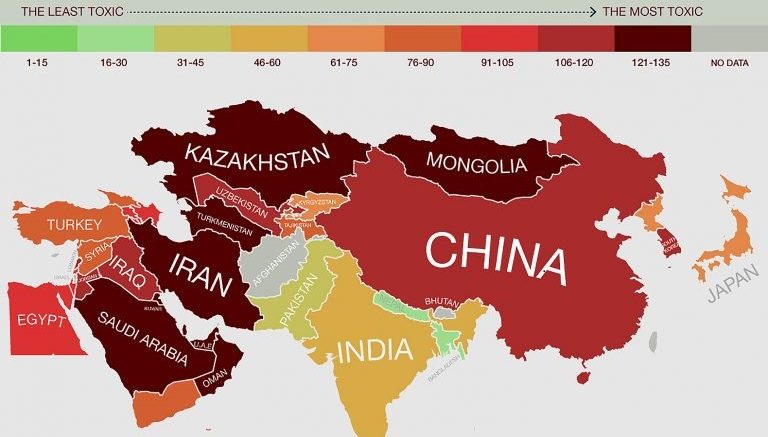 Just about everyone has heard by now how bad the pollution problem in China has gotten, but not many realize that may not be the most toxic country in the world after all.

In fact, it doesn’t even make the list of the top ten most toxic countries according to new rankings released earlier this year.

Pollution is becoming a more pressing problem each year as air pollution levels rose by 8 percent in less than a decade, and it is the reason for 7 million deaths every year, according to the World Health Organization (WHO).

To find out which countries in the world are the most and least toxic, the Eco Experts, a solar panel company from the U.K, has put together data from 135 countries (not including a few like Iceland) measuring the totals from five categories:

Many of the most toxic countries are the oil-rich countries. The top ten most toxic countries (making them also the most hazardous to live in) are:

These were followed by:

Saudi Arabia ranked as the most toxic country in the world because of its air pollution levels.

Kuwait, Qatar, Bahrain and the UAE ranked high on the list of most toxic countries due to pollution and low renewable energy production, although the Eco Experts say all of them have great opportunities to create clean energy due to their climate – low rainfall and long daylight hours are perfect for solar energy.

Turkmenistan ranked low due to a high number of deaths attributed to air pollution: 108 per 100,000 annually.

China, to many people’s surprise, ranked #20 with nineteen countries doing much worse when it comes to pollution. Its rank just may improve greatly in the next decade as the country is planning to invest about $325 billion into renewable energy by year 2020, according to The Guardian. Meanwhile, most of the least-toxic countries according to the rankings were found in Africa (the study, however, did not take water pollution into account which is a real problem in many African countries).The top ten least toxic and the safest for health countries are:

There are also a few of surprising key findings about other countries that did not make either top ten list. The U.S. ranked 66th out of 135 – better than Canada, Russia, or China; but worse than India, and the United Kingdom.

The United Kingdom was found to have one of the worst CO2 emission rankings in the world.

The most toxic European country is Luxembourg, which is small (with only half a million of people) and surrounded by other countries. It gets a lot of pollution from its neighbors like Belgium and Germany. And even though the Nordic countries produce a lot of renewable energy, they were also found to be big energy consumers. Iceland has the highest energy consumption in the whole world; Norway, Finland, and Sweden all rank on the top ten list of the biggest energy consumers.Jon Whiting of The Eco Experts explained the company’s motivation behind this research in a press release:

“This research is a way of naming and shaming the worst offenders around the world. Their lack of action against emissions not only puts their populations at risk of deadly pollution-related diseases but also threatens the future of our planet. These threats are not distant concerns for future generations; their effects are being felt now and lives are already being lost. This research highlights the need for every country to act fast and put more investment into renewable energy alternatives.”

Be the first to comment on "This New Map of The World Shows How TOXIC Each Country Ranks. These Results Will Surprise You."