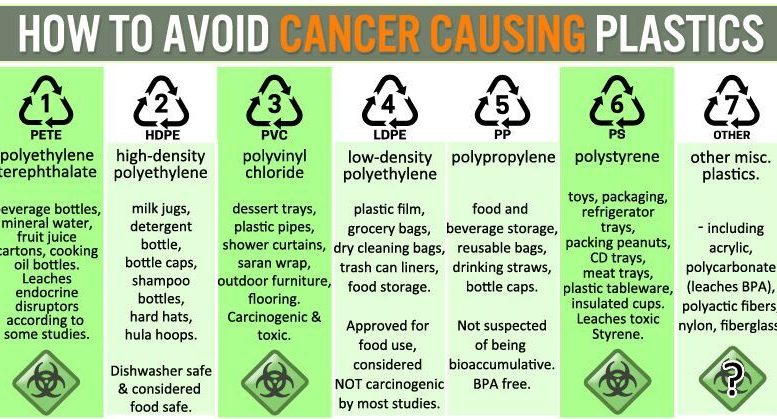 Over 1,600,000 new cases of cancer were predicted for 2016 in the USA, it’s not surprising that people are getting serious about finding the culprits that increase the risk of this class of disease. Plastics have often been suggested as one of these everyday carcinogens. Frustratingly, evidence is often scarce or inconclusive. However, there are some plastic chemicals it is wise to reduce exposure to in order to minimize health risk.

At the bottom of the bottle, you will find a triangle with a number, which can be anywhere from one to seven. With the symbol you see, you can learn which type of plastic you have in your hand and just how safe – how unsafe – it might be.

Number 1: Known as PET or PETE, the bottle with this number means that it should only be used once. This is because reusing them can expose people to a chemical substance called EPA. The plastic could also possibly emit antimony, which is a heavy metal that can interfere with the hormones in the body. It is also possible that the plastic is carcinogenic.

Number 2: If you find a triangle with the number “2” in it, the bottle is known as HDPE or HDP, which is considered the good plastic. It is named so because it doesn’t have as much emission as the other types of chemicals used in the other bottles when in contact with water.

Number 3: Also labeled as V or PVC, the number 3 in the bottle means that it has two toxic chemicals that can both influence the hormones in the body. Still, PVC is the most used type of plastic around and contains phthalates, including often the carcinogenic phthalate DEHP (see below).

Number 4: LDPE plastics have the number 4, which means they don’t emit chemicals when used in water bottles. However, most of them are actually present in plastic bags.

Number 5: PP or number 5 plastics are also good types of plastics. They are recognizable because of their white color. Sometimes, they are transparent. PP plastics are common in cups of yogurt and syrup bottles.

Number 6: Although this emits STIREN, which is carcinogenic, this plastic is used in fast food packaging as well as in coffee cups.

Number 7: Finally, plastics with no labels are in this category where they are known as PC. You should not trust plastics without labels because they often emit BPA, which is a very harmful chemical. Unfortunately, PC plastics are common in containers for food, sports drink bottles, and worse, infant bottles.

There are some compounds found in many plastics that are thought to contribute towards risk of cancer. Evidence tends to be limited, as studying the effects of these in humans has some obvious ethical barriers.

The three most supported compounds are:
• Phthalates
• Bisphenol A (BPA)
• Dioxins

Dioxins: The third of these, dioxins, you are less likely to contract directly in your day to day life as they are released during the incineration of plastic waste, particularly PVCs. They are not present in containers designed for food storage.

Exposure to dioxins is the primarily through food. Animals in polluted areas store the compound in their fat reserves, and the chemical accumulates through the food chain. Limiting consumption of fish or meat with a high fat content reduces exposure to these compounds. [1]

Phthalates and BPA are more likely to present due to plastics that you yourself are using. In 2011, Di(2-ethylhexyl) phthalate (DEHP) was listed in the US Report on Carcinogens as “reasonably anticipated to be a human carcinogen based on sufficient evidence of carcinogenicity from studies in experimental animals”. [2] This stuff is everywhere and regarded as a ubiquitous environmental pollutant. From the 2011 Report on Carcinogens:

BPA is a weak synthetic estrogen, which unsurprisingly can act as a hormone disruptor. As various cancers are related to hormonal controls, including some forms of breast cancer, many people feel that it is wise to limit exposure to BPA. [3]

An important point to observe is to ensure correct use of plastic items. Heating food in a plastic container containing BPA or phthalates is more likely to result in your food becoming contaminated with these harmful chemicals. Allowing plastics to come into contact with detergents can also result in these chemicals being released.

Which Plastics To Avoid?

A common recommendation is to avoid or exercise caution when using PETE, PVC, or Polystyrene plastics. There are easily identified by the standard labels found on plastic products: a triangle containing a number. These three types of plastic are numbers 1, 3, and 6.

Common uses of each of these include:

• #1 – PETE (polyethyleneterephthalate): flexible drink or oil containers
• #3 – PVC (polyvinyl chloride): plastic trays for sweets or fruit, innumerable other consumer uses.
• #6 – PS (polystyrene): Toys, hard packing, CD cases, vending machine cups
• #7 – Miscellaneous. Caution should be exercised when using products that fall into category 7. This is a kind of ‘misc.’ box for plastics that do not fall into one of the other classifications. It is therefore difficult to make any generalizations about the potential impacts of these as the chemical structure varies more widely. Categories 3 and 7 are considered most likely to contain BPA. [3]

Final note
Checking which type of plastic you are using takes only a few moments, and could have considerable impacts on your health. Realistically, no matter what we do we’re likely to contract trace quantities of all kinds of plastic compounds from the world around us. Reducing your own intake, however, could make all the difference.

Be the first to comment on "Do You Know Which Plastics Have The Highest Cancer Risk?"