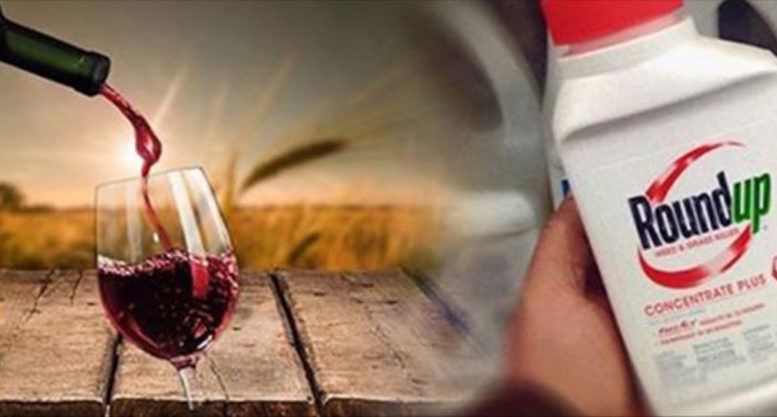 Posted By: The Healing Oracle Team 1st May 2017

Glyphosate usage has gotten so out of control that it’s seemingly taken on a life of its own and is now showing up even in foods that haven’t been directly sprayed, namely the grapes used to make organic wine.

Glyphosate, the active ingredient in Monsanto’s Roundup herbicide, is the most used agricultural chemical in history. It’s used in a number of different herbicides (700 in all), but Roundup is by far the most widely used.

Since glyphosate was introduced in 1974, 1.8 million tons have been applied to U.S. fields, and two-thirds of that volume has been sprayed in the last 10 years.

A recent analysis showed that farmers sprayed enough glyphosate in 2014 to apply 0.8 pounds of the chemical to every acre of cultivated cropland in the U.S., and nearly 0.5 a pound of glyphosate to all cropland worldwide.1

If you purchase organic foods or beverages, you should theoretically be safe from glyphosate exposure, as this chemical is not allowed in organic farming. But a new analysis revealed glyphosate has now infiltrated not only wine but also organic wine.

An anonymous supporter of advocacy group Moms Across America sent 10 wine samples to be tested for glyphosate. All of the samples tested positive for glyphosate — even organic wines, although their levels were significantly lower.2

The highest level detected was 18.74 parts per billion (ppb), which was found in a 2013 Cabernet Sauvignon from a conventional vineyard. This was more than 28 times higher than the other samples tested.

The lowest level, 0.659 ppb, was found in a 2013 Syrah, which was produced by a biodynamic and organic vineyard. An organic wine made from 2012 mixed red wine grapes also tested positive for glyphosate at a level of 0.913 ppb.

How Does Glyphosate End up in Wine?

While glyphosate isn’t sprayed directly onto grapes in vineyards (it would kill the vines), it’s often used to spray the ground on either side of the grape vines. Moms Across America reported:3
“This results in a 2-to 4- foot strip of Roundup sprayed soil with grapevines in the middle. According to Dr. Don Huber at a talk given at the Acres USA farm conference in December of 2011, the vine stems are inevitably sprayed in this process and the

Roundup is likely absorbed through the roots and bark of the vines from where it is translocated into the leaves and grapes.”

As for how the organic wines became contaminated, it’s likely that the glyphosate drifted over onto the organic and biodynamic vineyards from conventional vineyards nearby.

It’s also possible that the contamination is the result of glyphosate that’s left in the soil after a conventional farm converted to organic; the chemical may remain in the soil for more than 20 years.4

A study of glyphosate residues by the Munich Environmental Institute also found glyphosate in 14 best-selling German beers.5 All of the beers tested had glyphosate levels above the 0.1 microgram limit allowed in drinking water.

Levels ranged from a high of 29.74 micrograms per liter found in a beer called Hasseroeder to a low of 0.46 micrograms per liter, which was found in the beer Augustiner.6 Although no tests have yet been conducted on American beer, it’s likely to be contaminated with glyphosate as well.

Indeed, laboratory testing commissioned by Moms Across America and Sustainable Pulse revealed that glyphosate is now showing up virtually everywhere, including in blood and urine samples, breast milk, drinking water and more.7

The beer finding could be a blow to the German beer industry in particular. The country is the biggest beer producer in Europe and has long prided itself on brewing only the purest beer.

“Das Reinheitsgebot” is Germany’s food purity law. It’s one of the world’s oldest food safety laws and limited the ingredients in beer to only water, barley and hops (yeast was later approved as well).

Now Monsanto’s chemicals are threatening this German tradition and their reputation for producing the purest beer. As reported by The Local:8
“‘In contrast to our colleagues abroad, German brewers don’t use artificial flavours, enzymes or preservatives,’ said Hans-Georg Eils, president of the German Brewers’ Federation, at the Green Week agricultural fair in Berlin.

‘In times of healthy nutrition, demand for beer which is brewed according to the Reinheitsgebot is on the rise too,’ he said.”

Glyphosate May Cause Cancer and Other Health Concerns

Many are unaware of the fact that glyphosate is patented as an antibiotic. It’s designed to kill bacteria, which is one of the primary ways it harms both soils and human health. Recent research has even concluded that Roundup (and other pesticides) promotes antibiotic resistance.

Scientist Anthony Samsel, Ph.D. (watch my interview with him above) was the person who dug up the patents showing glyphosate is a biocide and an antibiotic. A study in poultry found the chemical destroys beneficial gut bacteria and promotes the spread of pathogenic bacteria.9

Samsel also reported that chronic low-dose oral exposure to glyphosate is a disruption of the balance among gut microbes, leading to an over-representation of pathogens, a chronic inflammatory state in the gut and an impaired gut barrier.

Monsanto’s own research supports the International Agency for Research on Cancer (IARC) determination that glyphosate is a Class 2A “probable human carcinogen” — a determination Monsanto is now trying to get retracted. Other research has shown glyphosate may:

Glyphosate May Be Even More Toxic Due to Surfactants

Most studies looking into glyphosate toxicity have only studied the “active” ingredient (glyphosate) and its breakdown product, aminomethylphosphonic acid (AMPA). But the presence of so-called inactive compounds in the herbicide may be amplifying glyphosate’s toxic effects.

A 2012 study revealed that inert ingredients such as solvents, preservatives, surfactants and other added substances are anything but “inactive.” They can, and oftentimes do, contribute to a product’s toxicity in a synergistic manner — even if they’re non-toxic in isolation.

Certain adjuvants in glyphosate-based herbicides were also found to be “active principles of human cell toxicity,” adding to the hazards inherent with glyphosate.

It’s well worth noting that, according to the researchers, this cell damage and/or cell death can occur at the residual levels found on Roundup-treated crops, as well as lawns and gardens where Roundup is applied for weed control.15 As written in the International Journal of Environmental Research and Public Health:16
“Pesticide formulations contain declared active ingredients and co-formulants presented as inert and confidential compounds. We tested the endocrine disruption of co-formulants in six glyphosate-based herbicides (GBH) … All co-formulants and formulations were comparably cytotoxic [toxic to living cells] well below the agricultural dilution of 1 percent (18 to 2000 times for co-formulants, 8 to 141 times for formulations).

… It was demonstrated for the first time that endocrine disruption by GBH could not only be due to the declared active ingredient but also to co-formulants.

These results could explain numerous in vivo results with GBHs not seen with G [glyphosate] alone; moreover, they challenge the relevance of the acceptable daily intake (ADI) value for GBHs exposures, currently calculated from toxicity tests of the declared active ingredient alone.”

How to Avoid Glyphosate in Your Food

Your best bet for minimizing health risks from herbicide and pesticide exposure is to avoid them in the first place by eating organic as much as possible and investing in a good water filtration system for your home or apartment. If you know you have been exposed to herbicides and pesticides, the lactic acid bacteria formed during the fermentation of kimchi may help your body break them down.

So including fermented foods like kimchi in your diet may also be a wise strategy to help detox the pesticides that do enter your body. One of the benefits of eating organic is that the foods will be free of genetically engineered (GE) ingredients, and this is key to avoiding exposure to toxic glyphosate. Following are some great resources to obtain wholesome organic food.

Eating locally produced organic food will not only support your family’s health, it will also protect the environment from harmful chemical pollutants and the inadvertent spread of genetically engineered seeds and chemical-resistant weeds and pests.

Be the first to comment on "Roundup’s Toxic Chemical Glyphosate, Found in 100% of California Wines Tested"