CNN is talking about how the big one is coming.

They have been saying it for awhile. They tell us every time. We should be worried and that only a quick visit to our physician to obtain the latest flu shot is necessary to stay clear of the vile disease.

Whichever flu it happens to be that year. We have our seasonal viruses like the ‘seasonal’ flu. I’m calling ‘fat steaming pile of seasonal rhetoric’ on this one, but alas! Now we have a new ‘out of season’ threat!

BE VERY AFRAID EVERYONE! It doesn’t have a name yet. According to this article by the lovely reporting at CNN.

Although we’ve been fed much BS regarding all of these suspicious diseases, I am not going to make that the major focus of this article. I may however, still reflect on these examples in order to establish an identifiable pattern with the reader. The major focus of this article is to help you understand when an attempt is being made to manipulate you and your family into making a decision that not only endangers you and your loved ones but further spreads the ignorance that got us here in the first place.

First off, Terror and fear is what drives a desire for self preservation, so the first line of the article states:

The other concerning part of that statement is ‘Experts’. Which experts? The video associated with this article shows Dr. Larry Brilliant. Yes, Brilliant, an Epidemiologist. Article written by Dr. Sanjay Gupta. These are our experts I suppose, and these experts will always want you to run and get the next vaccine. Bottom line. In states and provinces where this is mandatory, people who refuse can now have their children taken away. They can get locked up or both, among other punishments. This also includes discretization, humiliation or in some cases death. This is an example of lack of education and misplaced trust in an industry that is only supported by the mainstream media shills that rally for it and market this propaganda to you.

“…Such is the case with a highly lethal flu pandemic. And when it comes, it will affect every human alive today.”

Hey Mr. Gupta, did anyone tell you that you should never start a sentence with the word “And”? And, Fearporn much? And I especially like the part where he goes on to say that the only thing that comes close to this threat is climate change. Inserting more fearporn into your head on an entirely unrelated subject.

So then they go on to remove any doubts that even seasonal flu can be deadly for the young and the old and those with compromised immune systems. Most of us however, have already seen a similar flu and have native immunity or protection (or protection? yeah protection, that’s what they call it.).

The article goes on to say that babies are vulnerable because they haven’t been exposed to seasonal flu and older people because their immune system may not function so well. It is no secret that natural canal birthed babies have immunization from their mothers up to 6 months after the birth. Breastfed babies continue to see the immunization affects from their mothers entire viral experience. A child will always have a higher vulnerability in the absence of these very necessary components of child birth and nursing. Old people will most likely collect and retain several internal conditions and life habits that affect their immune system and may be more susceptible.

Then the article explains to us what a pandemic is, before delivering the final punchline.

Our only REAL hope is a vaccine, so the article purports. Then all of the justifications for vaccines start. The Spanish Flu of 1918, where 20-40% of the world became ill and more than 50 million people died. The Asian flu of 1958, and global death toll of 2 million. Then the Hong Kong flu in 1968, before the dramatic title repeats,

“We are overdue.” Again…

Let’s look at some other numbers, and before we start ONLY regurgitating numbers and stats let’s put on our free thinking caps and start coming to some conclusions, shall we? One thing you will not hear in any CNN article is think for yourself and do what you think is best for your own life and those around you.

We’ll start with the first most controversial subject surrounding vaccines. Autism. One of the first Autism prevalence surveys were conducted in the 1960’s and autism cases were estimated at 1 in 2500 people. In 2005 another study revealed that 1 in 160 people would have autism. Now the number is up to 1 in 45. All of these numbers are easily confirmed by a simple google search, numbers will vary from study to study but the pattern remains the same.

So what else is increasing? The rise in crap foods that contain chemicals and pharma-foods designed to trick your brain into eating more. Chemicals that you coat your entire body with and absorb. Chemicals sprayed on us from the skies, GMO’s, unnecessary surgeries, implants, tattoos and all sorts of stress related activities!! There is no wonder why we walk around with compromised immune systems and our heads in the sand.

What else was on the rise? The number of vaccines an individual has to take by a certain age. Let’s have a look at that shall we?

In 1950 there was the polio vaccine and in 1970 the MMR (Measles, Mumps, and Rubella) vaccine was added to the list of recommendations. Over that decade Tetanus, Diptheria, Pertussis, Polio, Measles, Mumps, all made it to said list, and still comprised of three vaccines, Polio, MMR, and DTP (Diptheria, Tetanus, and Pertussis).

Here is a child’s immunization schedule in 1995 (CDC):

In 2016, they have done a good job making the chart look prettier: 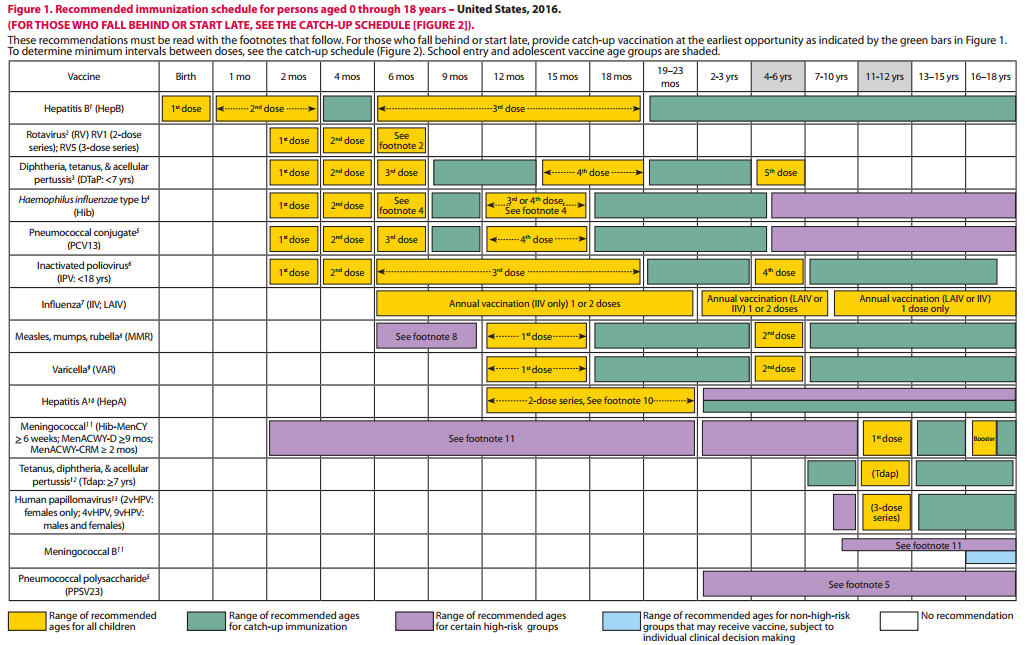 So, now here we are loading our children with these vaccines in massive amounts. Most people don’t take the time to read the ingredients on these vaccines because they blindly trust their doctors and physicians. The doctors and physicians blindly trust their training and information given to them by the institution. The institution does a great job compartmentalizing the flow of information to each individual branch of the medical community. They have also perfected the flow of money to these doctors so that they get paid for delivering these vaccines. The pressures of life and the expensive economy keeps them in line at their jobs. It’s a diabolical chain of control.

Now the ‘clear and present danger’ which are these rampant pandemics which terrify us on our main stream media outlets, there comes with it another problem and that is legislation. We have now come to a point where people are going to be forced by laws that permit them to do this. People make the laws at the end of the day unless you have given up ALL of your rights to just say ‘NO’ to being violated.

The article ends on a note where it almost complains how the techniques for manufacturing vaccines haven’t changed in 70 years and complains how the demand will not be met by the supply. Enter high tech firms to revolutionize these techniques and get these vaccines out the door faster! Let’s have more unprecedented partnerships between governments, and well… You can read the rest of the article if you want to know their diabolical plan. They literally tell it to your face what they are doing.

So with the rise in governmental desire to subjugate us to their will, and the clear propaganda on the main stream media, I tell you there is something else going on here and it is not for the benefit of our health. The medical industry is just that. An industry. Do you still have your thinking caps on? I really must urge anyone who is compelled to receive or administer a vaccine to really consider what you are doing or being asked to do. Don’t do it because CNN told you to.
RJM

We do the research you do decide,
Love and Light
The Healing Oracle
Article Posted By: Robert Morris

Indy Journalist and builder of things on the interwebs. Holistic Student and Poet. Sci-Fi Pulp writer and traveler. RJM

Be the first to comment on "CNN VIRAL LOAD OF BS"