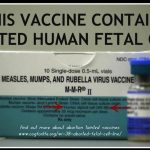 The medical industry, pediatricians, and unsuspecting parents are blindly trusting the CDC’s assertions of safety. And while we are discussing frightening matters, it should also be noted that neither the CDC nor the FDA can prove the safety of the current vaccine schedule. For further information, check out this link.

Mandatory vaccination laws are already a reality in states like California and Mississippi, and it has never been more dire for parents to understand the shocking ingredients in those vaccine vials. As advocates for our children, it is our job to be fully educated on matters that affect their health.

After all, every parent of a vaccine-injured child was once pro-vaccination.

In addition to the genetically modified ingredients in the vaccines being injected into babies, here are a few more disgusting ingredients they contain as well:

Pro-pharma outlets claim that only these two fetal cell lines are used, which is an outright lie. The two cell lines that have been admitted to be used in vaccines are:

1. WI-38 cell line (US): a human diploid fibroblast cell line derived from a three month old fetus aborted “therapeutically” because the family felt they had too many children. (Source)

2. MRC-5 cell line (UK): a cell line derived from lung fibroblasts of a 14 week old fetus due to “psychiatric” issues with the 27 year old mother. (Source)

Eye tissue from a 21 week old fetus is currently used in flu shots, as well as experimental vaccines for malaria and cancer, and Merck’s PER.C6 cell line, derived from the eye tissue of an 18 week old fetus, is the cell line used in many of the 271 vaccines in the CDC’s pipeline.

One of the more grotesque methods involved in vaccine manufacturing is the collection of fetal bovine serum. The purpose for serum is providing a nutrient broth for viruses to grow in cells.

How is the blood collected?

“After slaughter and bleeding of the cow at an abattoir, the mother’s uterus containing the calf fetus is removed during the evisceration process (removal of the mother’s internal organs) and transferred to the blood collection room. A needle is then inserted between the fetus’s ribs directly into its heart and the blood is vacuumed into a sterile collection bag. This process is aimed at minimizing the risk of contamination of the serum with micro-organisms from the fetus and its environment. Only fetuses over the age of three months are used otherwise the heart is considered too small to puncture.

Once collected, the blood is allowed to clot at room temperature and the serum separated through a process known as refrigerated centrifugation.”

As mentioned above, monkey kidney tissue is used to support the growth of certain viruses used in vaccine production. There remains a huge controversy over using these cells and their role contaminating the polio vaccine in the 1950s.

The story is best told in the Congressional papers of a courageous scientist, Bernice Eddy. The Executive Reorganization and Government Research of the Committee on Government Operations United States Senate, Ninety-Second Congress, Second Session [1972] states on page 500:

“The next and only serious vaccine crisis that has occurred since the polio episode was the realization in mid-1961 that a monkey virus later shown to cause tumors in hamsters was contaminating both polio and adenovirus vaccines. The virus, known as SV40, was entering the vaccines and, just as in the polio case were surviving the formalin treatment.

There were several states by which the full extent of the SV40 problem became known. First was the discovery in 1959-1960 by a DBS scientist, once again Bernice Eddy, that an unknown agent in the monkey kidney cells used to produce polio and adenovirus vaccines would cause tumors when the cells were injected into hamsters.”

“In 1954 Eddy, as a polio control officer, found live virus in supposedly killed polio vaccine; in 1955 she was relieved of her duties as polio control officer … After her discoveries concerning the SV40 virus, her staff and animal space were reduced and she was demoted from head of a section to head of a unit.”

“ … even when the contaminating virus was found to be oncogenic [cancer causing] in hamsters, the DBS [Division of Biologics Standards] and its expert advisory committee decided to leave existing stocks on the market rather than risk eroding public confidence by a recall.”

There has never been a more important time to shine a light on The Truth About Vaccines. The greatest health crisis of the 21st century is unfolding and we have an obligation to protect our children from harm. On April 12th, 2017 join more than 60 experts in a groundbreaking docu-series to expose the truth about vaccines. Register now to watch the 7-part series FOR FREE. Be sure to share this link with family and friends so others can secure their spot to watch this documentary 100% free. Sign up NOW by clicking here.

Read the full list of disgusting ingredients by visiting https://healingoracle.ch/2015/06/30/the-most-truthful-list-of-all-vaccines-published-to-date-including-all-of-the-official-ingredients-a-must-share-before-its-deleted-2/

Be the first to comment on "Aborted Human DNA & Fetal Calf Blood Are Ingredients In Children’s Vaccines! This SHOULd concern you!"